Chapter 3: Ecosystems and the Biosphere

An ecosystem is a community of organisms and their abiotic (non-living) environment. Ecosystems can be small, such as the tide pools found near the rocky shores of many oceans, or large, such as those found in the tropical rainforest of the Amazon in Brazil (Figure 1  below).

There are important variables that determine which organisms can exist within a particular environment.  Life in an ecosystem often involves competition for limited resources, which occurs both within a single species and between different species. Organisms compete for things such as food, water, sunlight, space, and mineral nutrients. Other critical factors that influence biological communities are related to the physical environment, such as climate, elevation, and geology.

Freshwater ecosystems are the least common, occurring on only 1.8 percent of Earth’s surface. These systems comprise lakes, rivers, streams, and springs; they are quite diverse and support a variety of animals, plants, fungi, protists and prokaryotes.

Terrestrial ecosystems, also known for their diversity, are grouped into large categories called biomes. A biome is a large-scale community of organisms, primarily defined on land by the dominant plant types that exist in geographic regions of the planet with similar climatic conditions. Examples of biomes include tropical rainforests, savannas, deserts, grasslands, temperate forests, and tundras. Grouping these ecosystems into just a few biome categories obscures the great diversity of the individual ecosystems within them. For example, the saguaro cacti (Carnegiea gigantean) and other plant life in the Sonoran Desert, in the United States, are relatively diverse compared with the desolate rocky desert of Boa Vista, an island off the coast of Western Africa (Figure 2 below).

Ecosystems are complex with many interacting parts. They are routinely exposed to various disturbances: changes in the environment that affect their compositions, such as yearly variations in rainfall and temperature. Many disturbances are a result of natural processes. For example, when lightning causes a forest fire and destroys part of a forest ecosystem, the ground is eventually populated with grasses, followed by bushes and shrubs, and later mature trees. Thus, the forest is restored to its former state. This process is so universal that ecologists have given it a name—succession. The impact of environmental disturbances caused by human activities is now as significant as the changes wrought by natural processes. Human agricultural practices, air pollution, acid rain, global deforestation, overfishing, oil spills, and illegal dumping on land and into the ocean all have impacts on ecosystems.

A food chain is a linear sequence of organisms through which nutrients and energy pass as one organism eats another. The levels in the food chain are producers, primary consumers, higher-level consumers, and finally decomposers. These levels are used to describe ecosystem structure and dynamics. There is a single path through a food chain. Each organism in a food chain occupies a specific trophic level (energy level), its position in the food chain or food web. 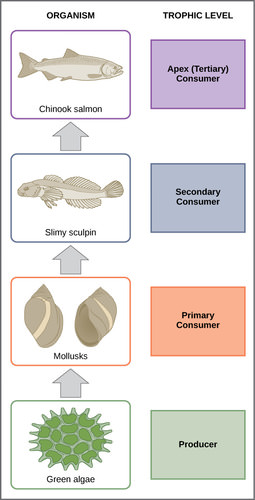 Figure 3. These are the trophic levels of a food chain in Lake Ontario at the United States–Canada border. Energy and nutrients flow from photosynthetic green algae at the base to the top of the food chain: the Chinook salmon. (credit: modification of work by National Oceanic and Atmospheric Administration/NOAA)

One major factor that limits the number of steps in a food chain is energy. Energy is lost at each trophic level and between trophic levels as heat and in the transfer to decomposers (Figure 4 below). Thus, after a limited number of trophic energy transfers, the amount of energy remaining in the food chain may not be great enough to support viable populations at higher trophic levels. 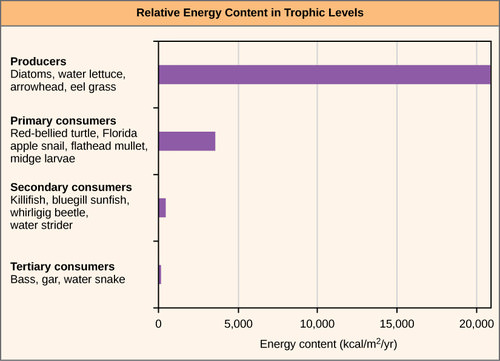 Figure 4. The relative energy in trophic levels in a Silver Springs, Florida, ecosystem is shown. Each trophic level has less energy available, and usually, but not always, supports a smaller mass of organisms at the next level.

There is a one problem when using food chains to describe most ecosystems. Even when all organisms are grouped into appropriate trophic levels, some of these organisms can feed at more than one trophic level. In addition, species feed on and are eaten by more than one species. In other words, the linear model of ecosystems, the food chain, is a hypothetical and overly simplistic representation of ecosystem structure. A holistic model—which includes all the interactions between different species and their complex interconnected relationships with each other and with the environment—is a more accurate and descriptive model for ecosystems. A food web is a concept that accounts for the multiple trophic (feeding) interactions between each species (Figure 5 below). 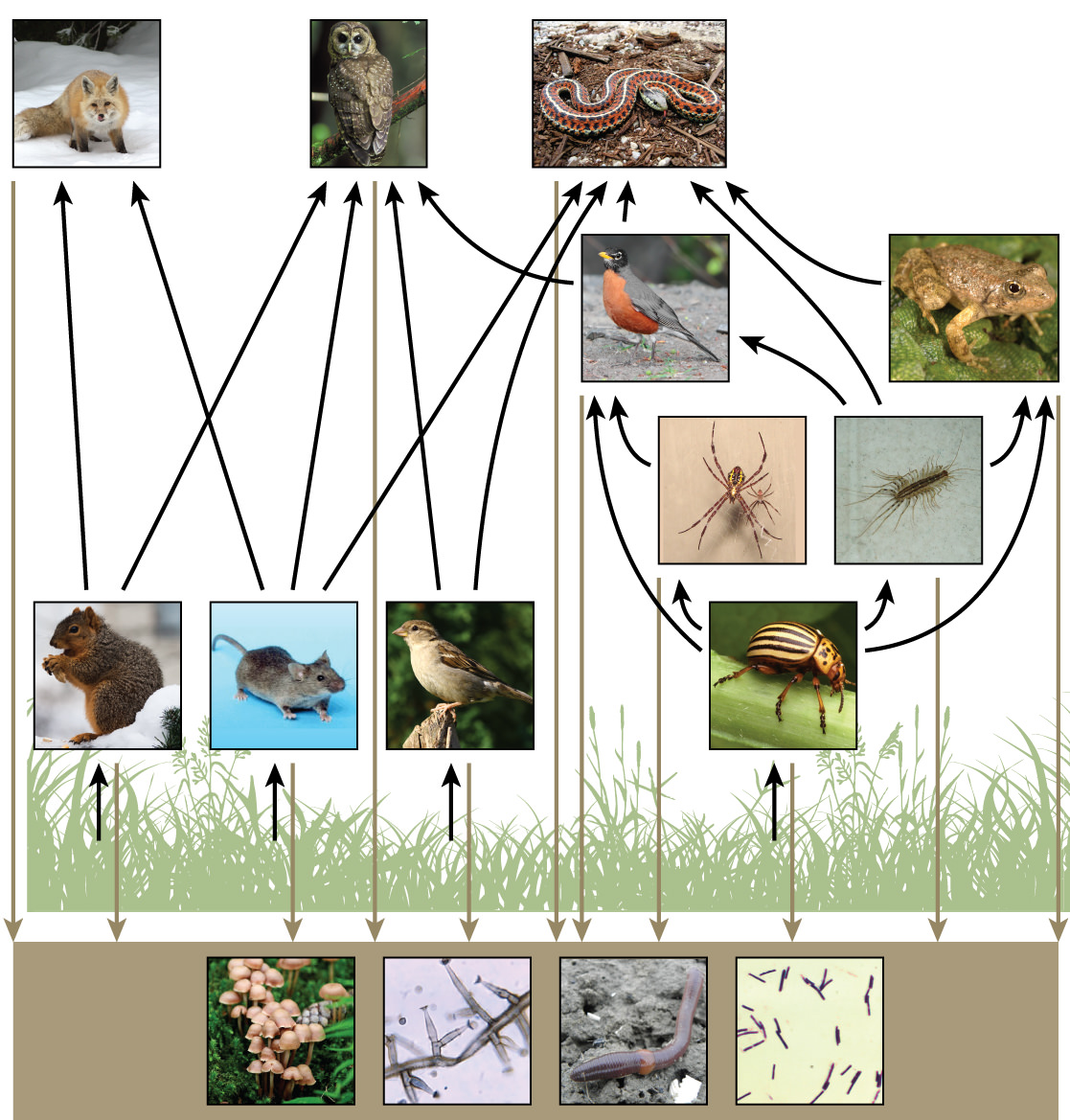 Two general types of food webs are often shown interacting within a single ecosystem. A grazing food web has plants or other photosynthetic organisms at its base, followed by herbivores and various carnivores. A detrital food web consists of a base of organisms that feed on decaying organic matter (dead organisms), including decomposers (which break down dead and decaying organisms) and detritivores (which consume organic detritus). These organisms are usually bacteria, fungi, and invertebrate animals that recycle organic material back into the biotic part of the ecosystem as they themselves are consumed by other organisms.

All living things require energy in one form or another. At the cellular level, energy is used in most metabolic pathways (usually in the form of ATP), especially those responsible for building large molecules from smaller compounds. Living organisms would not be able to assemble complex organic molecules (proteins, lipids, nucleic acids, and  carbohydrates) without a constant energy input.

Food-web diagrams illustrate how energy flows directionally through ecosystems. They can also indicate how efficiently organisms acquire energy, use it, and how much remains for use by other organisms of the food web. Energy is acquired by living things in two ways: autotrophs harness light or chemical energy and heterotrophs acquire energy through the consumption and digestion of other living or previously living organisms.

Photosynthetic and chemosynthetic organisms are autotrophs, which are organisms capable of synthesizing their own food (more specifically, capable of using inorganic carbon as a carbon source). Photosynthetic autotrophs (photoautotrophs) use sunlight as an energy source, and chemosynthetic autotrophs (chemoautotrophs) use inorganic molecules as an energy source. Autotrophs are critical for ecosystems because they occupy the trophic level containing producers. Without these organisms, energy would not be available to other living organisms, and life would not be possible.

Photoautotrophs, such as plants, algae, and photosynthetic bacteria, are the energy source for a majority of the world’s ecosystems. Photoautotrophs harness the Sun’s solar energy by converting it to chemical energy. The rate at which photosynthetic producers incorporate energy from the Sun is called gross primary productivity. However, not all of the energy incorporated by producers is available to the other organisms in the food web because producers must also grow and reproduce, which consumes energy. Net primary productivity is the energy that remains in the producers after accounting for these organisms’ metabolism and heat loss. The net productivity is then available to the primary consumers at the next trophic level.

Chemoautotrophs are primarily bacteria and archaea that are found in rare ecosystems where sunlight is not available, such as those associated with dark caves or hydrothermal vents at the bottom of the ocean (Figure 6 below). Many chemoautotrophs in hydrothermal vents use hydrogen sulfide (H2S), which is released from the vents, as a source of chemical energy. This allows them to synthesize complex organic molecules, such as glucose, for their own energy and, in turn, supplies energy to the rest of the ecosystem.

Figure 6. Swimming shrimp, a few squat lobsters, and hundreds of vent mussels are seen at a hydrothermal vent at the bottom of the ocean. As no sunlight penetrates to this depth, the ecosystem is supported by chemoautotrophic bacteria and organic material that sinks from the ocean’s surface. This picture was taken in 2006 at the submerged NW Eifuku volcano off the coast of Japan by the National Oceanic and Atmospheric Administration (NOAA). The summit of this highly active volcano lies 1535 m below the surface.

One of the most important consequences of ecosystem dynamics in terms of human impact is biomagnification. Biomagnification is the increasing concentration of persistent, toxic substances in organisms at each successive trophic level. These are substances that are lipid soluble and are stored in the fat reserves of each organism. Many substances have been shown to biomagnify, including classical studies with the pesticide dichlorodiphenyltrichloroethane (DDT), which were described in the 1960s bestseller Silent Spring by Rachel Carson. DDT was a commonly used pesticide before its dangers to apex consumers, such as the bald eagle, became known. DDT and other toxins are taken in by producers and passed on to successive levels of consumers at increasingly higher rates.  As bald eagles feed on contaminated  fish, their DDT levels rise. It was discovered that DDT caused the eggshells of birds to become fragile, which contributed to the bald eagle being listed as an endangered species under U.S. law. The use of DDT was banned in the United States in the 1970s.

Another substances that biomagnifies is polychlorinated biphenyl (PCB), which was used as coolant liquids in the United States until its use was banned in 1979. PCB was best studied in aquatic ecosystems where predatory fish species accumulated very high concentrations of the toxin that is otherwise exists at low concentrations in the environment. As illustrated in a study performed by the NOAA in the Saginaw Bay of Lake Huron of the North American Great Lakes (Figure 7 below), PCB concentrations increased from the producers of the ecosystem (phytoplankton) through the different trophic levels of fish species. The apex consumer, the walleye, has more than four times the amount of PCBs compared to phytoplankton. Also, research found that birds that eat these fish may have PCB levels that are at least ten times higher than those found in the lake fish. 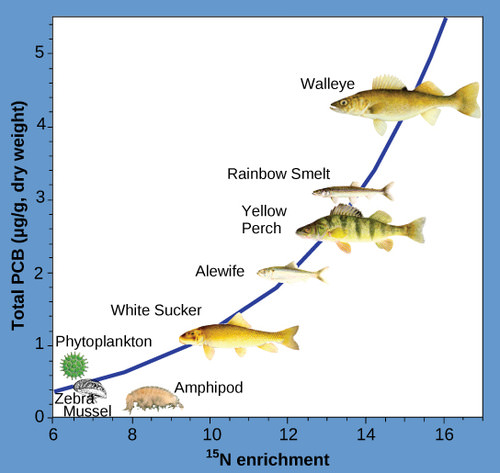 Figure 7. This chart shows the PCB concentrations found at the various trophic levels in the Saginaw Bay ecosystem of Lake Huron. Notice that the fish in the higher trophic levels accumulate more PCBs than those in lower trophic levels. (credit: Patricia Van Hoof, NOAA)

Other concerns have been raised by the biomagnification of heavy metals, such as mercury and cadmium, in certain types of seafood. The United States Environmental Protection Agency recommends that pregnant women and young children should not consume any swordfish, shark, king mackerel, or tilefish because of their high mercury content. These individuals are advised to eat fish low in mercury: salmon, shrimp, pollock, and catfish. Biomagnification is a good example of how ecosystem dynamics can affect our everyday lives, even influencing the food we eat.

Energy Flow through Ecosystems by OpenStax is licensed under CC BY 3.0. Modified from the original by Matthew R. Fisher.