Earth is home to an impressive array of life forms. From single-celled organisms to creatures made of many trillions of cells, life has taken on many wonderful shapes and evolved countless strategies for survival. Recall that cell theory dictates that all living things are made of one or more cells. Some organisms are made of just a single cell, and are thus referred to as unicellular. Organisms containing more than one cell are said to be multicellular. Despite the wide range of organisms, there exists only two fundamental cell plans: prokaryotic and eukaryotic. The main difference these two cell plans is that eukaryotic cells have internal, membrane-bound structures called organelles (see chp 2.3). Thus, if you were to microscopically analyze the cells of any organism on Earth, you would find either prokaryotic or eukaryotic cells depending on the type of organism.

Biologists name, group, and classify organisms based on similarities in genetics and morphology. This branch of biological science is known as taxonomy. Taxonomists group organisms into categories that range from very broad to very specific (Figure 1). The broadest category is called domain and the most specific is species (notice the similarities between the words specific and species).  Currently, taxonomists recognize three domains: Bacteria, Archaea, and Eukarya. All life forms are classified within these three domains. 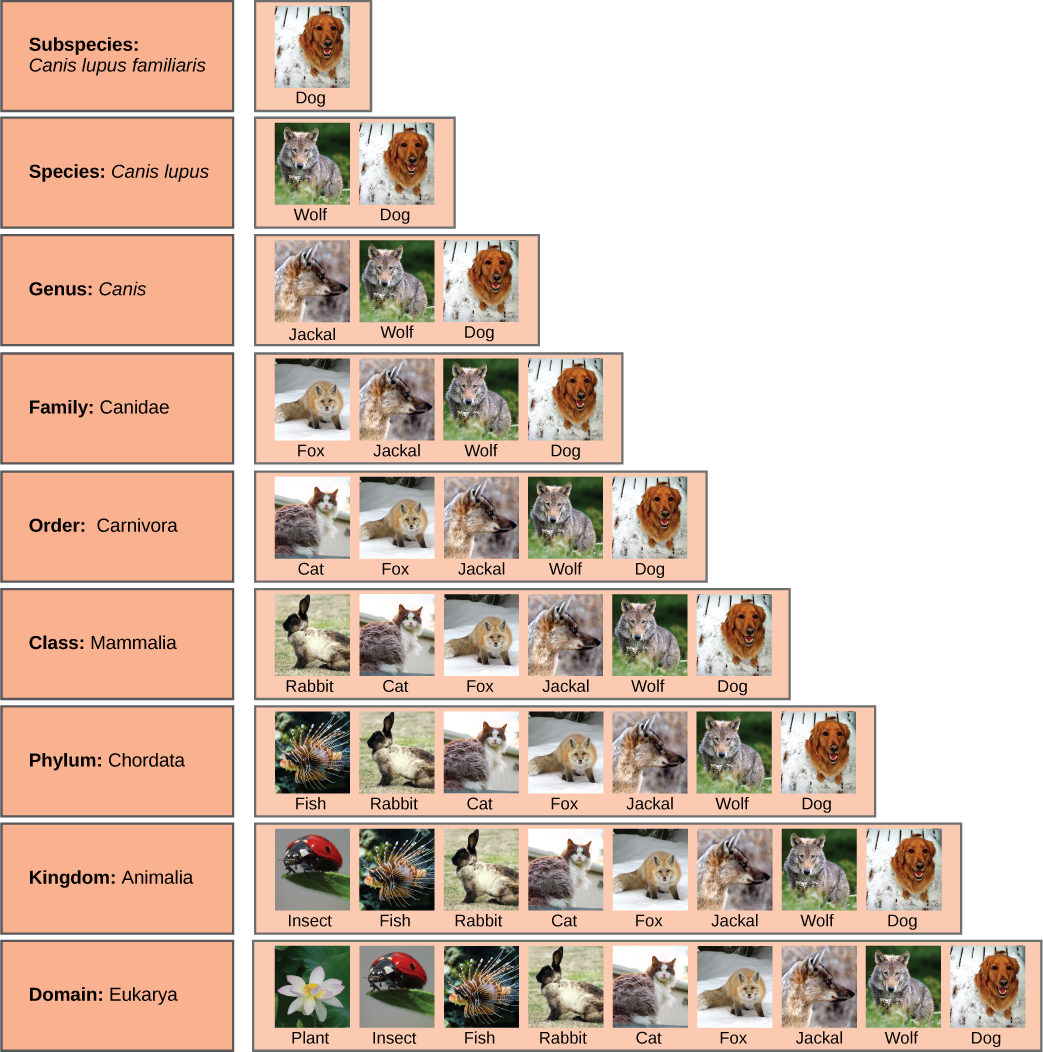 Domain Bacteria includes prokaryotic, unicellular organisms (Figure 2). They are incredibly abundant and found in nearly every imaginable type of habitat, including your body. While many people view bacteria only as disease-causing organisms, most species are actually either benign or beneficial to humans. While it is true that some bacteria may cause disease in people, this is more the exception than the rule.

Bacteria are well-known for their metabolic diversity. Metabolism is a general term describing the complex biochemistry that occurs inside of cells. Many species of bacteria are autotrophs, meaning they can create their own food source without having to eat other organisms. Most autotrophic bacteria do this by using photosynthesis, a process that converts light energy into chemical energy that can be utilized by cells. A well-known and ecologically-important group of photosynthetic bacteria is cyanobacteria. These are sometimes referred to a blue-green algae, but this name is not appropriate because, as you will see shortly, algae are organisms that belong to domain Eukarya.  Cyanobacteria play important roles in food webs of aquatic systems, such as lakes.

Other species of bacteria are heterotrophs, meaning that they need to acquire their food by eating other organisms. This classification includes the bacteria that cause disease in humans (during an infection, the bacteria is eating you). However, most heterotrophic bacteria are harmless to humans. In fact, you have hundreds of species of bacteria living on your skin and in your large intestine that do you no harm. Beyond your body, heterotrophic bacteria play vital roles in ecosystems, especially soil-dwelling bacteria that decompose living matter and make nutrients available to plants.

Figure 2. Many prokaryotes fall into three basic categories based on their shape: (a) cocci, or spherical; (b) bacilli, or rod-shaped; and (c) spirilla, or spiral-shaped. (credit a: modification of work by Janice Haney Carr, Dr. Richard Facklam, CDC; credit c: modification of work by Dr. David Cox, CDC; scale-bar data from Matt Russell). This figure by OpenStax is licensed under CC BY 4.0

Like bacteria, organisms in domain Archaea are prokaryotic and unicellular. Superficially, they look a lot like bacteria, and many biologists confused them as bacteria until a few decades ago. But hiding in their genes is a story that modern DNA analysis has recently revealed: archaeans are so different genetically that they belong in their own domain.

Many archaean species are found in some of the most inhospitable environments, areas of immense pressure (bottom of the ocean), salinity (such as the Great Salt Lake), or heat (geothermal springs). Organisms that can tolerate and even thrive in such conditions are known as extremophiles. (It should be noted that many bacteria are also extremophiles). Along with genetic evidence, the fact that a large percentage of archaeans are extremophiles suggests that they may be descendants of some of the most ancient lifeforms on Earth; life that originated on a young planet that was inhospitable by today’s standards.

For whatever reason, archaeans are not as abundant in and on the human body as bacteria, and they cause substantially fewer diseases. Research on archaeans continues to shed light on this interesting and somewhat mysterious domain.

This domain is most familiar to use because it includes humans and other animals, along with plants, fungi, and a lesser-known group, the protists. Unlike the other domains, Domain Eukarya contains multicellular organisms, in addition to unicellular species. The domain is characterized by the presence of eukaryotic cells. For this domain, you will be introduced to several of its kingdoms. Kingdom is the taxonomic grouping immediately below domain (see Figure 1).

Kingdom Fungi includes multicellular and unicellular, heterotrophic fungi. Fungi are commonly mistaken for plants because some species of fungi grow in the ground. Fungi are fundamentally different from plants in that they do not perform photosynthesis and instead feed on the living matter of others. Another misconception is that all fungi are mushrooms. A mushroom is a temporary reproductive structure used by some fungal species, but not all. Some fungi take the form of molds and mildews, which are commonly seen on rotting food. Lastly, yeast are unicellular fungi. Many species of yeast are important to humans, especially baker’s and brewer’s yeast. Through their metabolism, these yeast produce CO2  gas and alcohol. The former makes bread rise and the latter is the source for all alcoholic beverages.

Protists refer to a highly disparate group that was formerly its own kingdom until recent genetic analysis indicated that it should be split in to many kingdoms (Figure 4). As a group, protists are very diverse and include unicellular, multicellular, heterotrophic, and autotrophic organisms. The term ‘protist’ was used as a catchall for any eukaryote that was neither animal, plant, or fungus. Examples of protists include macroalgae such as kelps and seaweeds, microalgae such as diatoms and dinoflagellates, and important disease-causing microbes such as Plasmodium, the parasite that causes malaria.  Sadly, malaria kills hundreds of thousands of people every year.

With this cursory and fundamental understanding of biological diversity, you are now better equipped to study the role of biodiversity in the biosphere and in human economics, health, and culture. Each life form, even the smallest microbe, is a fascinating and and complex living machine. This complexity means we will likely never fully understand each organism and the myriad ways they interact with each other, with us, and with their environment. Thus, it is wise to value biodiversity and take measures to conserve it.

This work by Matthew R. Fisher is licensed under CC BY 4.0.