Environmental toxicology is the scientific study of the health effects associated with exposure to toxic chemicals (Table 1) occurring in the natural, work, and living environments. The term also describes the management of environmental toxins and toxicity, and the development of protections for humans and the environment.

Routes of Exposure to Chemicals

In order to cause health problems, chemicals must enter your body. There are three main “routes of exposure,” or ways a chemical can get into your body.

Once chemicals have entered your body, some can move into your bloodstream and reach internal “target” organs, such as the lungs, liver, kidneys, or nervous system.

What Forms do Chemicals Take?

Chemical substances can take a variety of forms. They can be in the form of solids, liquids, dusts, vapors, gases, fibers, mists and fumes. The form a substance is in has a lot to do with how it gets into your body and what harm it can cause. A chemical can also change forms. For example, liquid solvents can evaporate and give off vapors that you can inhale. Sometimes chemicals are in a form that can’t be seen or smelled, so they can’t be easily detected.

What Health Effects Can Chemicals Cause?

An acute effect of a contaminant (The term “contaminant” means hazardous substances, pollutants, pollution, and chemicals) is one that occurs rapidly after exposure to a large amount of that substance. A chronic effect of a contaminant results from exposure to small amounts of a substance over a long period of time. In such a case, the effect may not be immediately obvious. Chronic effect are difficult to measure, as the effects may not be seen for years. Long-term exposure to cigarette smoking, low level radiation exposure, and moderate alcohol use are all thought to produce chronic effects.

For centuries, scientists have known that just about any substance is toxic in sufficient quantities. For example, small amounts of selenium are required by living organisms for proper functioning, but large amounts may cause cancer. The effect of a certain chemical on an individual depends on the dose (amount) of the chemical. This relationship is often illustrated by a dose-response curve which shows the relationship between dose and the response of the individual. Lethal doses in humans have been determined for many substances from information gathered from records of homicides, accidental poisonings, and testing on animals.

A dose that is lethal to 50% of a population of test animals is called the lethal dose-50% or LD-50. Determination of the LD-50 is required for new synthetic chemicals in order to give a measure of their toxicity. A dose that causes 50% of a population to exhibit any significant response (e.g., hair loss, stunted development) is referred to as the effective dose-50% or ED-50. Some toxins have a threshold amount below which there is no apparent effect on the exposed population.

The contamination of the air, water, or soil with potentially harmful substances can affect any person or community. Contaminants (Table 2) are often chemicals found in the environment in amounts higher than what would be there naturally. We can be exposed to these contaminants from a variety of residential, commercial, and industrial sources. Sometimes harmful environmental contaminants occur biologically, such as mold or a toxic algae bloom.

An Overview of Some Common Contaminants

Arsenic is a naturally occurring element that is normally present throughout our environment in water, soil, dust, air, and food. Levels of arsenic can regionally vary due to farming and industrial activity as well as natural geological processes. The arsenic from farming and smelting tends to bind strongly to soil and is expected to remain near the surface of the land for hundreds of years as a long-term source of exposure. Wood that has been treated with chromated copper arsenate (CCA) is commonly found in decks and railing in existing homes and outdoor structures such as playground equipment. Some underground aquifers are located in rock or soil that has naturally high arsenic content.

Most arsenic gets into the body through ingestion of food or water. Arsenic in drinking water is a problem in many countries around the world, including Bangladesh, Chile, China, Vietnam, Taiwan, India, and the United States. Arsenic may also be found in foods, including rice and some fish, where it is present due to uptake from soil and water. It can also enter the body by breathing dust containing arsenic. Researchers are finding that arsenic, even at low levels, can interfere with the body’s endocrine system. Arsenic is also a known human carcinogen associated with skin, lung, bladder, kidney, and liver cancer.

Mercury is a naturally occurring metal, a useful chemical in some products, and a potential health risk. Mercury exists in several forms; the types people are usually exposed to are methylmercury and elemental mercury. Elemental mercury at room temperature is a shiny, silver-white liquid which can produce a harmful odorless vapor. Methylmercury, an organic compound, can build up in the bodies of long-living, predatory fish. To keep mercury out of the fish we eat and the air we breathe, it’s important to take mercury-containing products to a hazardous waste facility for disposal. Common products sold today that contain small amounts of mercury include fluorescent lights and button-cell batteries.

Although fish and shellfish have many nutritional benefits, consuming large quantities of fish increases a person’s exposure to mercury. Pregnant women who eat fish high in mercury on a regular basis run the risk of permanently damaging their developing fetuses. Children born to these mothers may exhibit motor difficulties, sensory problems and cognitive deficits. Figure 1 identifies the typical (average) amounts of mercury in commonly consumed commercial and sport-caught fish. 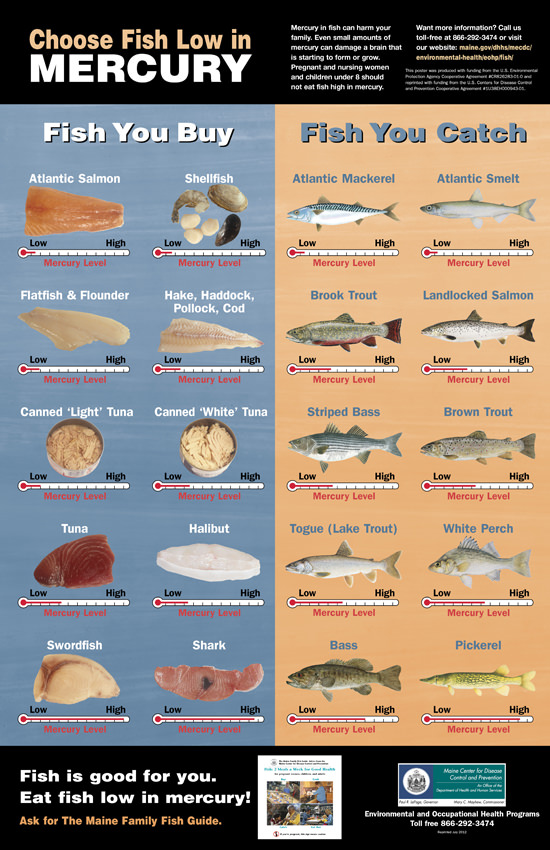 Bisphenol A (BPA) is a chemical produced in large quantities for use primarily in the production of polycarbonate plastics and epoxy resins. Polycarbonate plastics have many applications including use in some food and drink packaging, e.g., water and infant bottles, compact discs, impact-resistant safety equipment, and medical devices. Epoxy resins are used as lacquers to coat metal products such as food cans, bottle tops, and water supply pipes. Some dental sealants and composites may also contribute to BPA exposure. The primary source of exposure to BPA for most people is through the diet. Bisphenol A can leach into food from the protective internal epoxy resin coatings of canned foods and from consumer products such as polycarbonate tableware, food storage containers, water bottles, and baby bottles. The degree to which BPA leaches from polycarbonate bottles into liquid may depend more on the temperature of the liquid or bottle, than the age of the container. BPA can also be found in breast milk.

What can I do to prevent exposure to BPA?

Lead is a metal that occurs naturally in the rocks and soil of the earth’s crust. It is also produced from burning fossil fuels such as coal, oil, gasoline, and natural gas; mining; and manufacturing. Lead has no distinctive taste or smell. The chemical symbol for elemental lead is Pb. Lead is used to produce batteries, pipes, roofing, scientific electronic equipment, military tracking systems, medical devices, and products to shield X-rays and nuclear radiation. It is used in ceramic glazes and crystal glassware.  Because of health concerns, lead and lead compounds were banned from house paint in 1978; from solder used on water pipes in 1986; from gasoline in 1995; from solder used on food cans in 1996; and from tin-coated foil on wine bottles in 1996. The U.S. Food and Drug Administration has set a limit on the amount of lead that can be used in ceramics.

Lead and lead compounds are listed as “reasonably anticipated to be a human carcinogen”. It can affect almost every organ and system in your body. It can be equally harmful if breathed or swallowed. The part of the body most sensitive to lead exposure is the central nervous system, especially in children, who are more vulnerable to lead poisoning than adults.  A child who swallows large amounts of lead can develop brain damage that can cause convulsions and death; the child can also develop blood anemia, kidney damage, colic, and muscle weakness. Repeated low levels of exposure to lead can alter a child’s normal mental and physical growth and result in learning or behavioral problems. Exposure to high levels of lead for pregnant women can cause miscarriage, premature births, and smaller babies. Repeated or chronic exposure can cause lead to accumulate in your body, leading to lead poisoning.

Formaldehyde is a colorless, flammable gas or liquid that has a pungent, suffocating odor. It is a volatile organic compound, which is an organic compound that easily becomes a vapor or gas. It is also naturally produced in small, harmless amounts in the human body. The primary way we can be exposed to formaldehyde is by breathing air containing it. Releases of formaldehyde into the air occur from industries using or manufacturing formaldehyde, wood products (such as particle-board, plywood, and furniture), automobile exhaust, cigarette smoke, paints and varnishes, and carpets and permanent press fabrics. Nail polish, and commercially applied floor finish emit formaldehyde.

Radiation is energy given off by atoms and is all around us. We are exposed to radiation every day from natural sources like soil, rocks, and the sun. We are also exposed to radiation from man-made sources like medical X-rays and smoke detectors. We’re even exposed to low levels of radiation on cross-country flights, from watching television, and even from some construction materials. You cannot see, smell or taste radiation. Some types of radioactive materials are more dangerous than others. So it’s important to carefully manage radiation and radioactive substances to protect health and the environment.

Radon is a colorless, odorless radioactive gas. It comes from the natural decay of uranium or thorium found in nearly all soils. It typically moves up through the ground and into the home through cracks in floors, walls and foundations. It can also be released from building materials or from well water. Radon breaks down quickly, giving off radioactive particles. Long-term exposure to these particles can lead to lung cancer. Radon is the leading cause of lung cancer among nonsmokers, according to the U.S. Environmental Protection Agency, and the second leading cause behind smoking.