Resolution of the global water pollution crisis requires multiple approaches to improve the quality of our fresh water and move towards sustainability. The most deadly form of water pollution, pathogenic microorganisms that cause waterborne diseases, kills almost 2 million people in underdeveloped countries every year. The best strategy for addressing this problem is proper sewage (wastewater) treatment. Untreated sewage is not only a major cause of pathogenic diseases, but also a major source of other pollutants, including oxygen-demanding waste, nutrients (N and P, particularly), and toxic heavy metals. Wastewater treatment is done at a sewage treatment plant in urban areas and through a septic tank system in rural areas.

The main purpose of sewage (wastewater) treatment is to remove organic matter (oxygen-demanding waste) and kill bacteria. Special methods also can be used to remove nutrients and other pollutants. The numerous steps at a conventional sewage treatment plant include pretreatment (screening and removal of sand and gravel), primary treatment (settling or floatation to remove organic solids, fat, and grease), secondary treatment (aerobic bacterial decomposition of organic solids), tertiary treatment (bacterial decomposition of nutrients and filtration), disinfection (treatment with chlorine, ozone, ultraviolet light, or bleach to kill most microbes), and either discharge to surface waters (usually a local river) or reuse for some other purpose, such as irrigation, habitat preservation, and artificial groundwater recharge (Figure 1).

The concentrated organic solid produced during primary and secondary treatment is called sludge, which is treated in a variety of ways including landfill disposal, incineration, use as fertilizer, and anaerobic bacterial decomposition, which is done in the absence of oxygen. Anaerobic decomposition of sludge produces methane gas, which can be used as an energy source. To reduce water pollution problems, separate sewer systems (where street runoff goes to rivers and only wastewater goes to a wastewater treatment plant) are much better than combined sewer systems, which can overflow and release untreated sewage into surface waters during heavy rain. Some cities such as Chicago, Illinois have constructed large underground caverns and also use abandoned rock quarries to hold storm sewer overflow. After the rain stops, the stored water goes to the sewage treatment plant for processing. 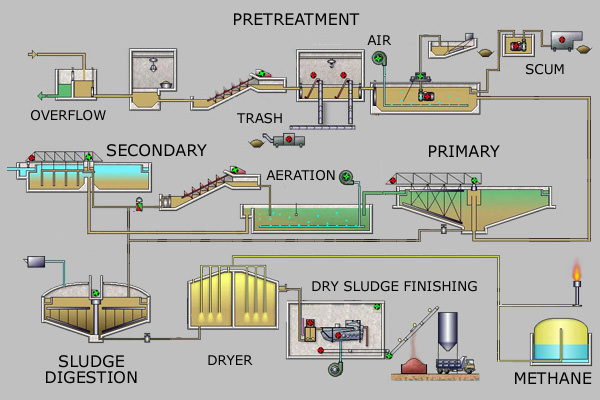 Figure 1. Steps at a Sewage Treatment Plant The numerous processing steps at a conventional sewage treatment plant include pretreatment (screening and removal of sand and gravel), primary treatment (settling or floatation to remove organic solids, fat, and grease), secondary treatment (aerobic bacterial decomposition of organic solids), tertiary treatment (bacterial decomposition of nutrients and filtration), disinfection (treatment with chlorine, ozone, ultraviolet light, or bleach), and either discharge to surface waters (usually a local river) or reuse for some other purpose, such as irrigation, habitat preservation, and artificial groundwater recharge. Source: Leonard G.via Wikipedia

A septic tank system is an individual sewage treatment system for homes in typically rural settings. The basic components of a septic tank system (Figure 2) include a sewer line from the house, a septic tank (a large container where sludge settles to the bottom and microorganisms decompose the organic solids anaerobically), and the drain field (network of perforated pipes where the clarified water seeps into the soil and is further purified by bacteria). Water pollution problems occur if the septic tank malfunctions, which usually occurs when a system is established in the wrong type of soil or maintained poorly. 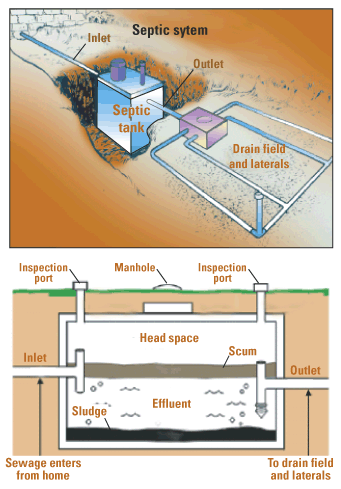 For many developing countries, financial aid is necessary to build adequate sewage treatment facilities. The World Health Organization estimates an estimated cost savings of between $3 and $34 for every $1 invested in clean water delivery and sanitation. The cost savings are from health care savings, gains in work and school productivity, and prevented deaths. Simple and inexpensive techniques for treating water at home include chlorination, filters, and solar disinfection. Another alternative is to use constructed wetlands technology (marshes built to treat contaminated water), which is simpler and cheaper than a conventional sewage treatment plant.

Bottled water is not a sustainable solution to the water crisis. Bottled water is not necessarily any safer than the U.S. public water supply, it costs on average about 700 times more than U.S. tap water, and every year it uses approximately 200 billion plastic and glass bottles that have a relatively low rate of recycling. Compared to tap water, it uses much more energy, mainly in bottle manufacturing and long-distance transportation. If you don’t like the taste of your tap water, then please use a water filter instead of bottled water!

During the early 1900s rapid industrialization in the U.S. resulted in widespread water pollution due to free discharge of waste into surface waters. The Cuyahoga River in northeast Ohio caught fire numerous times, including a famous fire in 1969 that caught the nation’s attention. In 1972 Congress passed one of the most important environmental laws in U.S. history, the Federal Water Pollution Control Act, which is more commonly called the Clean Water Act. The purpose of the Clean Water Act and later amendments is to maintain and restore water quality, or in simpler terms to make our water swimmable and fishable. It became illegal to dump pollution into surface water unless there was formal permission and U.S. water quality improved significantly as a result. More progress is needed because currently the EPA considers over 40,000 U.S. water bodies as impaired, most commonly due to pathogens, metals, plant nutrients, and oxygen depletion. Another concern is protecting groundwater quality, which is not yet addressed sufficiently by federal law. 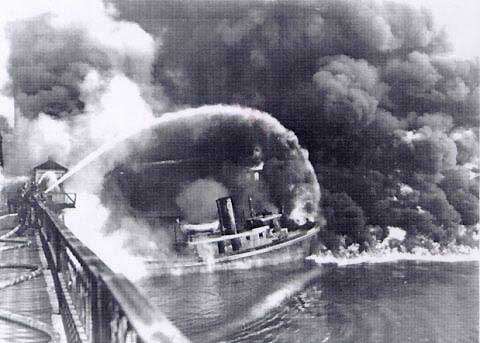