Progress continues in the fight against hunger, yet an unacceptably large number of people lack the food they need for an active and healthy life. The latest available estimates indicate that about 795 million people in the world – just over one in nine –still go to bed hungry every night, and an even greater number live in poverty (defined as living on less than $1.25 per day). Poverty—not food availability—is the major driver of food insecurity. Improvements in agricultural productivity are necessary to increase rural household incomes and access to available food but are insufficient to ensure food security. Evidence indicates that poverty reduction and food security do not necessarily move in tandem. The main problem is lack of economic (social and physical) access to food at national and household levels and inadequate nutrition (or hidden hunger). Food security not only requires an adequate supply of food but also entails availability, access, and utilization by all—people of all ages, gender, ethnicity, religion, and socioeconomic levels.

From Agriculture to Food Security

Agriculture and food security are inextricably linked. The agricultural sector in each country is dependent on the available natural resources, as well as the politics that govern those resources. Staple food crops are the main source of dietary energy in the human diet and include things such as rice, wheat, sweet potatoes, maize, and cassava.

Food security is essentially built on four pillars: availability, access, utilization and stability. An individual must have access to sufficient food of the right dietary mix (quality) at all times to be food secure. Those who never have sufficient quality food are chronically food insecure.

When food security is analyzed at the national level, an understanding not only of national production is important, but also of the country’s access to food from the global market, its foreign exchange earnings, and its citizens’ consumer choices. Food security analyzed at the household level is conditioned by a household’s own food production and household members’ ability to purchase food of the right quality and diversity in the market place. However, it is only at the individual level that the analysis can be truly accurate because only through understanding who consumes what can we appreciate the impact of sociocultural and gender inequalities on people’s ability to meet their nutritional needs.The definition of food security is often applied at varying levels of aggregation, despite its articulation at the individual level. The importance of a pillar depends on the level of aggregation being addressed. At a global level, the important pillar is food availability. Does global agricultural activity produce sufficient food to feed all the world’s inhabitants? The answer today is yes, but it may not be true in the future given the impact of a growing world population, emerging plant and animal pests and diseases, declining soil productivity and environmental quality, increasing use of land for fuel rather than food, and lack of attention to agricultural research and development, among other factors.

The third pillar, food utilization, essentially translates the food available to a household into nutritional security for its members. One aspect of utilization is analyzed in terms of distribution according to need. Nutritional standards exist for the actual nutritional needs of men, women, boys, and girls of different ages and life phases (that is, pregnant women), but these “needs” are often socially constructed based on culture. For example, in South Asia evidence shows that women eat after everyone else has eaten and are less likely than men in the same household to consume preferred foods such as meats and fish. Hidden hunger commonly results from poor food utilization: that is, a person’s diet lacks the appropriate balance of macro- (calories) and micronutrients (vitamins and minerals). Individuals may look well nourished and consume sufficient calories but be deficient in key micronutrients such as vitamin A, iron, and iodine.

When food security is analyzed at the national level, an understanding not only of national production is important, but also of the country’s access to food from the global market, its foreign exchange earnings, and its citizens’ consumer choices. Food security analyzed at the household level is conditioned by a household’s own food production and household members’ ability to purchase food of the right quality and diversity in the market place. However, it is only at the individual level that the analysis can be truly accurate because only through understanding who consumes what can we appreciate the impact of sociocultural and gender inequalities on people’s ability to meet their nutritional needs.

Food stability is when a population, household, or individual has access to food at all times and does not risk losing access as a consequence of cyclical events, such as the dry season. When some lacks food stability, they have malnutrition, a lack of essential nutrients.  This is economically costly because it can cost individuals 10 percent of their lifetime earnings and nations 2 to 3 percent of gross domestic product (GDP) in the worst-affected countries (Alderman 2005). Achieving food security is even more challenging in the context of HIV and AIDS. HIV affects people’s physical ability to produce and use food, reallocating household labor, increasing the work burden on women, and preventing widows and children from inheriting land and productive resources.

Obesity means having too much body fat. It is not the same as overweight, which means weighing too much. Obesity has become a significant global health challenge, yet is preventable and reversible. Over the past 20 years, a global overweight/obesity epidemic has emerged, initially in industrial countries and now increasingly in low- and middle-income countries, particularly in urban settings, resulting in a triple burden of undernutrition, micronutrient deficiency, and overweight/obesity. There is significant variation by region; some have very high rates of undernourishment and low rates of obesity, while in other regions the opposite is true (Figure 1).

However, obesity has increased to the extent that the number of overweight people now exceeds the number of underweight people worldwide. The economic cost of obesity has been estimated at $2 trillion, accounting for about 5% of deaths worldwide. Almost 30% of the world’s population, or 2.1 billion people, are overweight or obese, 62% of whom live in developing countries. 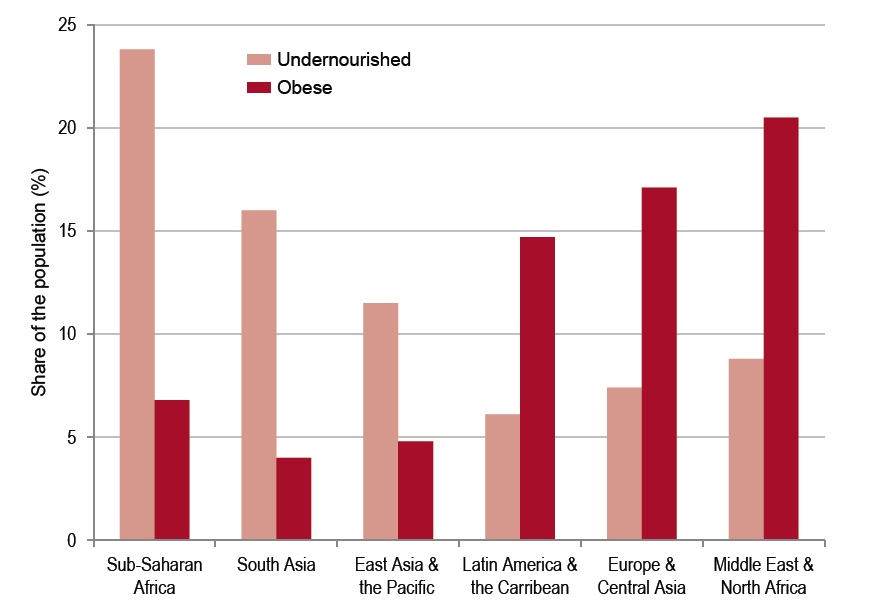 Figure 1. Obesity and undernourishment by region.

Obesity accounts  for a growing level and share of worldwide  noncommunicable diseases, including diabetes, heart disease, and certain cancers that can reduce quality of life and increase public health costs of already under-resourced developing  countries. The number of overweight children is projected to double by 2030.  Driven primarily by increasing availability of processed, affordable, and effectively marketed food, the global food system is falling short with rising obesity and related poor health outcomes. Due to established health implications and rapid increase in prevalence, obesity is now a recognized major global health challenge.