The word “soil” has been defined differently by different scientific disciplines. In agriculture and horticulture, soil generally refers to the medium for plant growth, typically material within the upper meter or two (Figure 1). We will use this definition in this chapter. Soil consists predominantly of mineral matter, but also contains organic matter (humus) and living organisms. The pore spaces between mineral grains are filled with varying proportions of water and air.

In common usage, the term soil is sometimes restricted to only the dark topsoil in which we plant our seeds or vegetables. In a more broad definition, civil engineers use the term soil for any unconsolidated (soft when wet) material that is not considered bedrock. Under this definition, soil can be as much as several hundred feet thick! Ancient soils, sometimes buried and preserved in the subsurface, are referred to as paleosols (Figure 2) and reflect past climatic and environmental conditions. 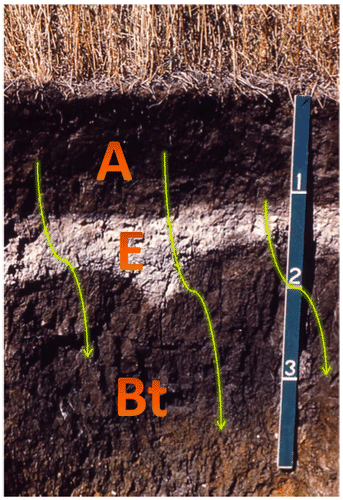 Figure 1. Soil Profile. Photograph shows a soil profile from South Dakota with A, E, and Bt horizons. The yellow arrows symbolize translocation of fine clays to the Bt horizon. The scale is in feet. Source: University of Idaho and modified by D. Grimley. 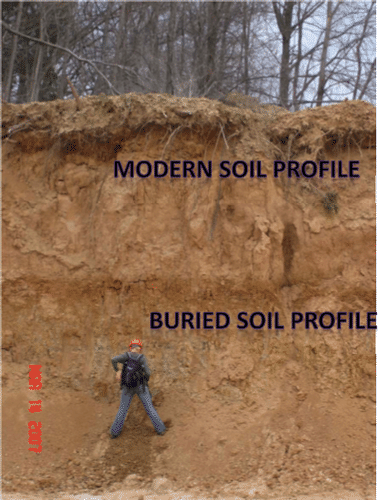 Soil is important to our society primarily because it provides the foundation of agriculture and forestry. Of course, soil is also a critical component for terrestrial ecosystems, and thus important to animals, plants, fungi, and microorganisms.

Soil plays a role in nearly all biogeochemical cycles on the Earth’s surface. Global cycling of key elements such as carbon (C), nitrogen (N), sulfur (S), and phosphorous (P) all pass through soil. In the hydrologic cycle, soil helps to mediate the flow of precipitation from the surface into the groundwater. Microorganisms living in soil can also be important components of biogeochemical cycles through the action of decomposition and other processes such as nitrogen fixation.

The fundamental factors that affect soil genesis can be categorized into five elements: climate, organisms, relief, parent material, and time. One could say that the relief, climate, and organisms dictate the local soil environment and act together to cause weathering and mixing of the soil parent material over time. As soil is formed it often has distinct layers, which are formally described as “horizons.” Upper horizons (labeled as the A and O horizons) are richer in organic material and so are important in plant growth, while deeper layers (such as the B and C horizons) retain more of the original features of the bedrock below (Figure 3).

Figure 3. This images shows the different horizons, or layers, in soil. This work by Wilsonbiggs is licensed under CC BY-SA 4.0

The role of climate in soil development includes aspects of temperature and precipitation. Soils in very cold areas with permafrost conditions tend to be shallow and weakly developed due to the short growing season. Organic rich surface horizons are common in low-lying areas due to limited decomposition. In warm, tropical soils, soils tend to be thicker, with extensive leaching and mineral alteration. In such climates, organic matter decomposition and chemical weathering occur at an accelerated rate.

Animals, plants, and microorganisms all have important roles in soil development processes, in providing a supply of organic matter, and/or in nutrient cycling. Worms, nematodes, termites, ants, gophers, moles, etc. all cause considerable mixing of soil and help to blend soil, aerate and lighten the soil by creating pores (which help store water and air).

Plant life provides organic matter to soil and helps to recycle nutrients with uptake by roots in the subsurface. The type of plant life that occurs in a given area, such as types of trees or grasses, depends on the climate, along with parent material and soil type. With the annual dropping of leaves and needles, trees tend to add organic matter to soil surfaces, helping to create a thin, organic-rich A or O horizon over time. Grasses, on the other hand, have a considerable root and surface masses that add to the soil each fall for annuals and short-lived perennials. For this reason, grassland soils have much thicker A horizons with higher organic matter contents, and are more agriculturally productive than forest soils.

The local landscape can have a surprisingly strong effect on the soils that form on site. The local topography (relief) can have important microclimatic effects as well as affecting rates of soil erosion. In comparison to flat regions, areas with steep slopes overall have more soil erosion, more runoff of rainwater, and less water infiltration, all of which lead to more limited soil development in very hilly or mountainous areas. In the northern hemisphere, south-facing slopes are exposed to more direct sunlight angles and are thus warmer and drier than north-facing slopes. The cooler, moister north-facing slopes have a more dynamic plant community due to less evapotranspiration and, consequently, experience less erosion because of plant rooting of soil and have thicker soil development.

Soil drainage affects organic matter accumulation and preservation, and local vegetation types. Well-drained soils, generally on hills or sideslopes, are more brownish or reddish due to conversion of ferrous iron (Fe2+) to minerals with ferric (Fe3+) iron. More poorly drained soils, in lowland, alluvial plains or upland depressions, tend more be more greyish, greenish-grey (gleyed), or dark colored, due to iron reduction (to Fe2+) and accumulation and preservation of organic matter in areas tending towards anoxic. Areas with poor drainage also tend to be lowlands into which soil material may wash and accumulate from surrounding uplands, often resulting in overthickened A or O horizons. In contrast, steeply sloping areas in highlands may experience erosion and have thinner surface horizons.

In general, soil profiles tend to become thicker (deeper), more developed, and more altered over time. However, the rate of change is greater for soils in youthful stages of development. The degree of soil alteration and deepening slows with time and at some point, after tens or hundreds of thousands of years, may approach an equilibrium condition where erosion and deepening (removals and additions) become balanced. Young soils (< 10,000 years old) are strongly influenced by parent material and typically develop horizons and character rapidly. Moderate age soils (roughly 10,000 to 500,000 years old) are slowing in profile development and deepening, and may begin to approach equilibrium conditions. Old soils (>500,000 years old) have generally reached their limit as far as soil horizonation and physical structure, but may continue to alter chemically or mineralogically.

Soil development is not always continual. Geologic events can rapidly bury soils (landslides, glacier advance, lake transgression), can cause removal or truncation of soils (rivers, shorelines) or can cause soil renewal with additions of slowly deposited sediment that add to the soil (wind or floodplain deposits). Biological mixing can sometimes cause soil regression, a reversal or bump in the road for the normal path of increasing development over time.