The prevailing agricultural system, variously called “conventional farming,” “modern agriculture,” or “industrial farming,” has delivered tremendous gains in productivity and efficiency. Food production worldwide has risen in the past 50 years; the World Bank estimates that between 70 percent and 90 percent of the recent increases in food production are the result of conventional agriculture rather than greater acreage under cultivation. U.S. consumers have come to expect abundant and inexpensive food.

Conventional farming systems vary from farm to farm and from country to country. However, they share many characteristics such as rapid technological innovation, large capital investments in equipment and technology, large-scale farms, single crops (monocultures); uniform high-yield hybrid crops, dependency on agribusiness, mechanization of farm work, and extensive use of pesticides, fertilizers, and herbicides. In the case of livestock, most production comes from systems where animals are highly concentrated and confined. 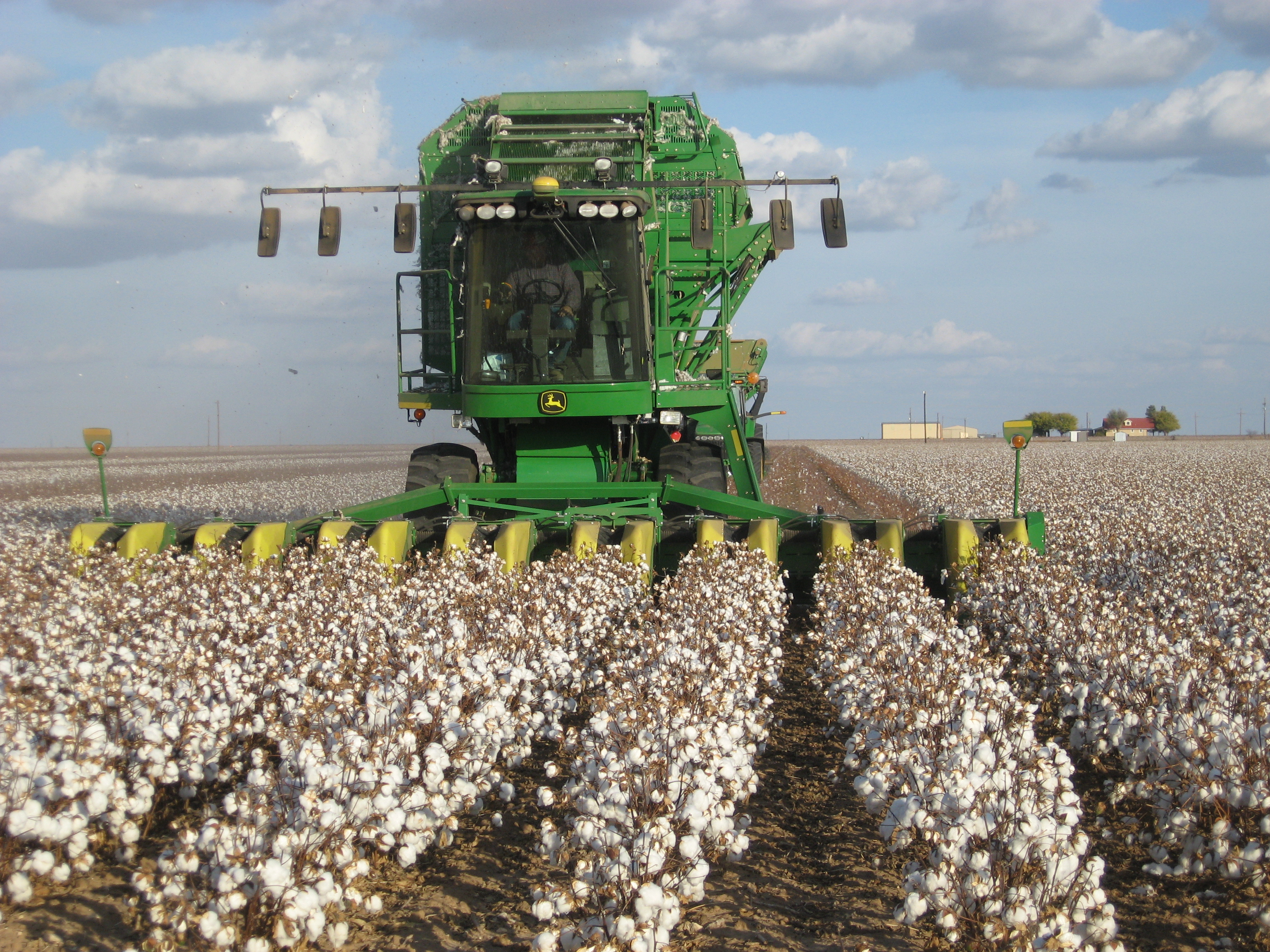 Figure 1. Conventional agriculture is dependent on large investments in mechanized equipment powered mostly by fossil fuels. This has made agriculture efficient, but has had an impact on the environment. Cotton Harvest by Kimberly Vardeman is licensed under CC BY 4.0.

Both positive and negative consequences have come with the bounty associated with industrial farming. Some concerns about conventional agriculture are presented below.

Decline in soil productivity can be due to wind and water erosion of exposed topsoil, soil compaction, loss of soil organic matter, water holding capacity, and biological activity; and salinization (increased salinity) of soils in highly-irrigated farming areas. Converting land to desert (desertification) can be caused by overgrazing of livestock and is a growing problem, especially in parts of Africa.

Agricultural practices have been found to contribute to non-point source water pollutants that include salts, fertilizers (nitrates and phosphorus, especially), pesticides, and herbicides. Pesticides from every chemical class have been detected in groundwater and are commonly found in groundwater beneath agricultural areas. They are also widespread in the nation’s surface waters. Eutrophication and “dead zones” due to nutrient runoff affect many rivers, lakes, and oceans. Reduced water quality impacts agricultural production, drinking water supplies, and fishery production. Water scarcity (discussed in the previous chapter) in many places is due to overuse of surface and ground water for irrigation with little concern for the natural cycle that maintains stable water availability.

Other environmental ills include over 400 insects and mite pests and more than 70 fungal pathogens that have become resistant to one or more pesticides. Pesticides have also placed stresses on pollinators and other beneficial insect species. This, along with habitat loss due to converting wildlands into agricultural fields, has affected entire ecosystems (such as the practice of converting tropical rainforests into grasslands for raising cattle).

Agriculture’s link to global climate change is just beginning to be appreciated. Destruction of tropical forests and other native vegetation for agricultural production has a role in elevated levels of carbon dioxide and other greenhouse gases. Recent studies have found that soils may be large reservoirs of carbon.

Economically, the U.S. agricultural sector includes a history of increasingly large federal expenditures. Also observed is a widening disparity among the income of farmers and the escalating concentration of agribusiness—industries involved with manufacture, processing, and distribution of farm products—into fewer and fewer hands. Market competition is limited and farmers have little control over prices of their goods, and they continue to receive a smaller and smaller portion of consumer dollars spent on agricultural products.

Economic pressures have led to a tremendous loss to the number of farms, particularly small farms, and farmers during the past few decades. More than 155,000 farms were lost from 1987 to 1997. Economically, it is very difficult for potential farmers to enter the business today because of the high cost of doing  business. Productive farmland also has been swallowed up by urban and suburban sprawl—since 1970, over 30 million acres have been lost to development.

Many potential health hazards are tied to farming practices. The general public may be affected by the sub-therapeutic use of antibiotics in animal production and the contamination of food and water by pesticides and nitrates. These are areas of active research to determine the levels of risk. The health of farm workers is also of concern, as their risk of exposure is much higher.

Historically, farming played an important role in our development and identity as a nation. From strongly agrarian roots, we have evolved into a culture with few farmers. Less than two percent of Americans now produce food for all U.S. citizens. Can sustainable and equitable food production be established when most consumers have so little connection to the natural processes that produce their food? What intrinsically American values have changed and will change with the decline of rural life and farmland ownership?

World population continues to grow. According to recent United Nations population projections, the world population will grow to 9.7 billion in 2050 and 11.2 billion in 2100. The rate of population increase is especially high in many developing countries. In these countries, the population factor, combined with rapid industrialization, poverty, political instability, and large food imports and debt burden, make long-term food security especially urgent.