Organic Farming is Good for Farmers, Consumers and the Environment

Organic agriculture is an ecological production management system that promotes and enhances biodiversity, biological cycles and soil biological activity. Organic food is produced by farmers who emphasize the use of renewable resources and the conservation of soil and water to enhance environmental quality for future generations.  Organic meat, poultry, eggs, and dairy products come from animals that are given no antibiotics or growth hormones. Organic food is produced without using most conventional pesticides, fertilizers made with synthetic ingredients or sewage sludge, or GMOs.

Organic production, with the corresponding practices to maintain soil fertility and soil health is therefore a more benign alternative to conventional, high-value horticulture. The organic food movement has been endorsed by the UN’s Food and Agricultural Organization, which maintains in a 2007 report that organic farming fights hunger, tackles climate change, and is good for farmers, consumers, and the environment. The strongest benefits of organic agriculture are its use of resources that are independent of fossil fuels, are locally available, incur minimal environmental stresses, and are cost effective.

IPM is a Combination of Common-Sense Practices

Integrated Pest Management (IPM) refers to a mix of farmer-driven, ecologically-based pest control practices that seeks to reduce reliance on synthetic chemical pesticides. It involves (a) managing pests (keeping them below economically damaging levels) rather than seeking to eradicate them; (b) relying, to the extent possible, on non-chemical measures to keep pest populations low; and (c) selecting and applying pesticides, when they have to be used, in a way that minimizes adverse effects on beneficial organisms, humans, and the environment. It is commonly understood that applying an IPM approach does not necessarily mean eliminating pesticide use, although this is often the case because pesticides are often over-used for a variety of reasons.

The IPM approach regards pesticides as mainly short-term corrective measures when more ecologically based control measures are not working adequately (sometimes referred to as using pesticides as the “last resort”). In those cases when pesticides are used, they should be selected and applied in such a manner as to minimize the amount of disruption that they cause to the environment, such as using products that are non-persistent and applying them in the most targeted way possible).

Biological control (biocontrol) is the use of one biological species to reduce populations of a different species. There has been a substantial increase in commercialization of biocontrol products, such as beneficial insects, cultivated predators and natural or non-toxic pest control products. Biocontrol is being mainstreamed to major agricultural commodities, such as cotton, corn and most commonly vegetable crops. Biocontrol is also slowly emerging in vector control in public health and in areas that for a long time mainly focused on chemical vector control in mosquito/malaria—and black fly/onchocerciasis—control programs. Successful and commercialized examples of biocontrol include ladybugs to depress aphid populations, parasitic wasps to reduce moth populations, use of the bacterium Bacillus thuringenensis to kill mosquito and moth larvae, and introduction of fungi, such as Trichoderma, to suppress fungal-caused plant diseases, leaf beetle (Galerucella calmariensis) to suppress purple loosestrife, a noxious weed (Figure 1). In all of these cases, the idea is not to completely destroy the pathogen or pest, but rather to reduce the damage below economically significant values. 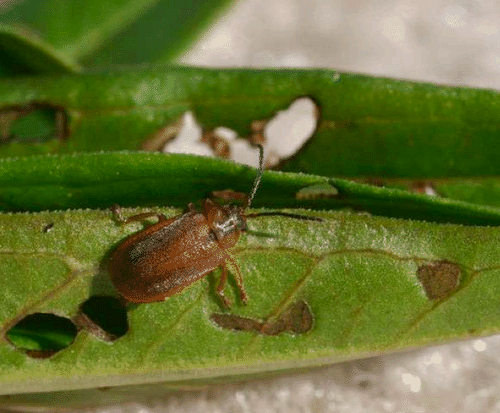 Figure 1. Young larvae of the leaf-beetle feed in and on the developing buds of plants, often destroying them. This may stunt plant growth and delay or prevent flowering. Adults (shown) and older larvae feed on leaves and cause severe defoliation. Leaf-beetles can be used to as a biocontrol for invasive plants such as purple loosestrife.

Intercropping means growing two or more crops in close proximity to each other during part or all of their life cycles to promote soil improvement, biodiversity, and pest management. Incorporating intercropping principles into an agricultural operation increases diversity and interaction between plants, arthropods, mammals, birds and microorganisms resulting in a more stable crop-ecosystem and a more efficient use of space, water, sunlight, and nutrients (Figure 2). This collaborative type of crop management mimics nature and is subject to fewer pest outbreaks, improved nutrient cycling and crop nutrient uptake, and increased water infiltration and moisture retention. Soil quality, water quality and wildlife habitat all benefit. 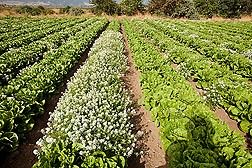 In modern agricultural practices, heavy machinery is used to prepare the seedbed for planting, to control weeds, and to harvest the crop. The use of heavy equipment has many advantages in saving time and labor, but can cause compaction of soil and disruption of the natural soil organisms. The problem with soil compaction is that increased soil density limits root penetration depth and may inhibit proper plant growth.

Figure 3. Farmers should consider no-till farming as the most important tool to prevent loss of soil moisture.

Tillage of fields does help to break up clods that were previously compacted, so best practices may vary at sites with different soil textures and composition. Another aspect of soil tillage is that it may lead to more rapid decomposition of organic matter due to greater soil aeration. Over large areas of farmland, this has the unintended consequence of releasing more carbon and nitrous oxides (greenhouse gases) into the atmosphere, thereby contributing to global warming effects. In no-till farming, carbon can actually become sequestered into the soil. Thus, no-till farming may be advantageous to sustainability issues on the local scale and the global scale. No-till systems of conservation farming have proved a major success in Latin America and are being used in South Asia and Africa.

Crop rotations are planned sequences of crops over time on the same field. Rotating crops provides productivity benefits by improving soil nutrient levels and breaking crop pest cycles. Farmers may also choose to rotate crops in order to reduce their production risk through diversification or to manage scarce resources, such as labor, during planting and harvesting timing. This strategy reduces the pesticide costs by naturally breaking the cycle of weeds, insects and diseases. Also, grass and legumes in a rotation protect water quality by preventing excess nutrients or chemicals from entering water supplies.

The Future of the Sustainable Agriculture Concept

Many in the agricultural community have adopted the sense of urgency and direction pointed to by the sustainable agriculture concept.  Sustainability has become an integral component of many government, commercial, and non-profit agriculture research efforts, and it is beginning to be woven into agricultural policy. Increasing numbers of farmers and ranchers have embarked on their own paths to sustainability, incorporating integrated and innovative approaches into their own enterprises.