by Molly McElroy [1]
used with permission 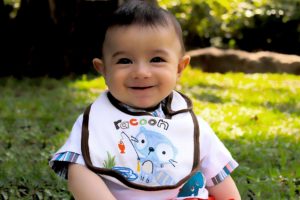 Many brain studies show that bilingual adults have more activity in areas associated with executive function, a set of mental abilities that includes problem-solving, shifting attention and other desirable cognitive traits.

Now new findings reveal that this bilingualism-related difference in brain activity is evident as early as 11 months of age, just as babies are on the verge of producing their first words.

“Our results suggest that before they even start talking, babies raised in bilingual households are getting practice at tasks related to executive function,” said Naja Ferjan Ramírez, lead author and a research scientist at the Institute for Learning & Brain Sciences (I-LABS) at the University of Washington.

“This suggests that bilingualism shapes not only language development, but also cognitive development more generally,” she said.

The study was published online April 4 in Developmental Science and will appear in an upcoming issue of the journal. 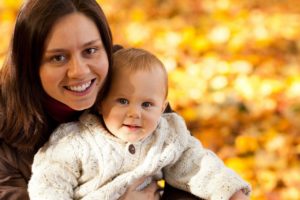 “Monolingual babies show a narrowing in their perception of sounds at about 11 months of age—they no longer discriminate foreign-language sounds they successfully discriminated at 6 months of age,” said co-author Patricia Kuhl, co-director of I-LABS.

“But babies raised listening to two languages seem to stay ‘open’ to the sounds of novel languages longer than their monolingual peers, which is a good and highly adaptive thing for their brains to do,” Kuhl said.

The researchers used magnetoencephalography (MEG), which measures magnetic changes given off by active nerve cells. Unlike other brain-imaging methods, MEG can precisely pinpoint both the timing and location of activity in the brain.

The study is the first to use MEG to do whole-brain analyses comparing activation patterns in response to speech sounds in babies raised in monolingual and bilingual households.

In the experiment, 16 11-month-old babies—eight from English-only households and eight from Spanish-English households, and an even mix of demographic factors such as the family’s socioeconomic status—sat in a highchair beneath the helmet-like MEG scanner.

The babies listened to an 18-minute stream of speech sounds, such as “da’s” and “ta’s.” The stream included sounds specific to English or Spanish, and sounds shared by the two languages. (See a video of the experimental set-up).

The researchers compared monolingual and bilingual babies’ brain responses to the language sounds. The most obvious difference they saw was in two brain regions associated with executive function, the prefrontal cortex and orbitofrontal cortex. In these regions, the Spanish-English bilingual babies had stronger brain responses to speech sounds, compared with English-only babies.

The findings align with brain studies in bilingual and monolingual adults, Ferjan Ramírez said. The boost bilingualism gives to executive function areas in the brain could arise from bilinguals needing to switch back and forth between languages, allowing them to routinely practice and improve executive function skills.

Other brain evidence from the study should be a relief for parents wondering if their bilingual baby is learning enough language:

“The 11-month-old baby brain is learning whatever language or languages are present in the environment and is equally capable of learning two languages as it is of learning one language,” Ferjan Ramírez said.

“Our results underscore the notion that not only are very young children capable of learning multiple languages, but that early childhood is the optimum time for them to begin,” she said.