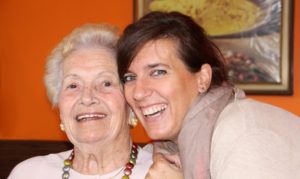 What roles do individual senior citizens play in your life? How do you relate to and interact with older people? What role do they play in neighborhoods and communities, in cities and in states? Sociologists are interested in exploring the answers to questions such as these through three different perspectives: functionalism, conflict, and symbolic interactionism. Each perspective contains multiple theories.

Functionalists analyze how the parts of society work together. Functionalists gauge how society’s parts are working together to keep society running smoothly. How does this perspective address aging? The elderly, as a group, are one of society’s vital parts.

Functionalists find that people with better resources who stay active in other roles adjust better to old age (Crosnoe and Elder, 2002). Three social theories within the functional perspective were developed to explain how older people might deal with later-life experiences. 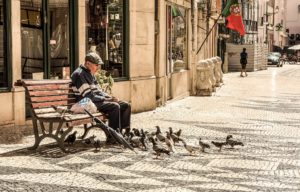 The earliest gerontological theory in the functionalist perspective is disengagement theory, which suggests that withdrawing from society and social relationships is a natural part of growing old. There are several main points to the theory. First, because everyone expects to die one day, and because we experience physical and mental decline as we approach death, it is natural to withdraw from individuals and society. Second, as the elderly withdraw, they receive less reinforcement to conform to social norms. Therefore, this withdrawal allows a greater freedom from the pressure to conform. Finally, social withdrawal is gendered, meaning it is experienced differently by men and women. Because men focus on work and women focus on marriage and family, when they withdraw they will be unhappy and directionless until they adopt a role to replace their accustomed role that is compatible with the disengaged state (Cummings and Henry, 1961).

The suggestion that old age was a distinct state in the life course, characterized by a distinct change in roles and activities, was groundbreaking when it was first introduced. However, the theory is no longer accepted in its classic form. Criticisms typically focus on the application of the idea that seniors universally naturally withdraw from society as they age, and that it does not allow for a wide variation in the way people experience aging (Hothschild, 1975). 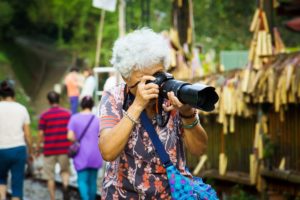 The social withdrawal that Cummings and Henry recognized (1961), and its notion that elderly people need to find replacement roles for those they’ve lost, is addressed anew in activity theory. According to this theory, activity levels and social involvement are key to this process, and key to happiness (Havinghurst 1961; Neugarten 1964; Havinghurst, Neugarten, and Tobin, 1968). According to this theory, the more active and involved an elderly person is, the happier he or she will be. Critics of this theory point out that access to social opportunities and activity are not equally available to all. Moreover, not everyone finds fulfillment in the presence of others or participation in activities. Reformulations of this theory suggest that participation in informal activities, such as hobbies, are what most effect later life satisfaction (Lemon, Bengtson, and Petersen, 1972).

According to continuity theory, the elderly make specific choices to maintain consistency in internal (personality structure, beliefs) and external structures (relationships), remaining active and involved throughout their elder years. This is an attempt to maintain social equilibrium and stability by making future decisions on the basis of already developed social roles (Atchley, 1971; Atchley, 1989). One criticism of this theory is its emphasis on so-called “normal” aging, which marginalizes those with chronic diseases such as Alzheimer’s.

Theorists working the conflict perspective view society as inherently unstable, an institution that privileges the powerful wealthy few while marginalizing everyone else. According to the guiding principle of conflict theory, social groups compete with other groups for power and scarce resources. Applied to society’s aging population, the principle means that the elderly struggle with other groups—for example, younger society members—to retain a certain share of resources. At some point, this competition may become conflict. 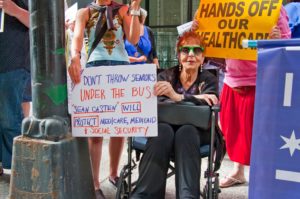 For example, some people complain that the elderly get more than their fair share of society’s resources. In hard economic times, there is great concern about the huge costs of Social Security and Medicare. One of every four tax dollars, or about 28 percent, is spent on these two programs. In 1950, the federal government paid $781 million in Social Security payments. Now, the payments are 870 times higher. In 2008, the government paid $296 billion (Statistical Abstract, 2011). The medical bills of the nation’s elderly population are rising dramatically. While there is more care available to certain segments of the senior community, it must be noted that the financial resources available to the aging can vary tremendously by race, social class, and gender. 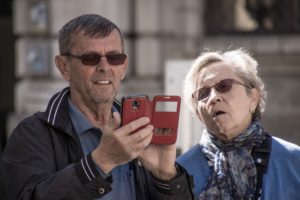 There are three classic theories of aging within the conflict perspective. Modernization theory (Cowgill and Holmes, 1972) suggests that the primary cause of the elderly losing power and influence in society are the parallel forces of industrialization and modernization. As societies modernize, the status of elders decreases, and they are increasingly likely to experience social exclusion. Before industrialization, strong social norms bound the younger generation to care for the older. Now, as societies industrialize, the nuclear family replaces the extended family. Societies become increasingly individualistic, and norms regarding the care of older people change. In an individualistic industrial society, caring for an elderly relative is seen as a voluntary obligation that may be ignored without fear of social censure.

The central reasoning of modernization theory is that as long as the extended family is the standard family, as in pre-industrial economies, elders will have a place in society and a clearly defined role. As societies modernize, the elderly, unable to work outside of the home, have less to offer economically and are seen as a burden. This model may be applied to both the developed and the developing world, and it suggests that as people age they will be abandoned and lose much of their familial support since they become a nonproductive economic burden. 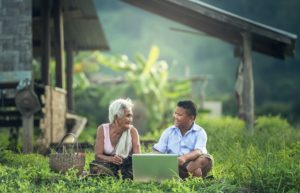 Another theory in the conflict perspective is age stratification theory (Riley, Johnson, and Foner, 1972). Though it may seem obvious now, with our awareness of ageism, age stratification theorists were the first to suggest that members of society might be stratified by age, just as they are stratified by race, class, and gender. Because age serves as a basis of social control, different age groups will have varying access to social resources such as political and economic power. Within societies, behavioral age norms, including norms about roles and appropriate behavior, dictate what members of age cohorts may reasonably do. For example, it might be considered deviant for an elderly woman to wear a bikini because it violates norms denying the sexuality of older females. These norms are specific to each age strata, developing from culturally based ideas about how people should “act their age.”

Thanks to amendments to the Age Discrimination in Employment Act (ADEA), which drew attention to some of the ways in which our society is stratified based on age, U.S. workers no longer must retire upon reaching a specified age. As first passed in 1967, the ADEA provided protection against a broad range of age discrimination and specifically addressed termination of employment due to age, age specific layoffs, advertised positions specifying age limits or preferences, and denial of healthcare benefits to those over sixty-five years old (U.S. EEOC, 2012).

Age stratification theory has been criticized for its broadness and its inattention to other sources of stratification and how these might intersect with age. For example, one might argue that an older white male occupies a more powerful role, and is far less limited in his choices, compared to an older white female based on his historical access to political and economic power. 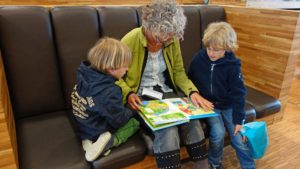 Finally, exchange theory (Dowd, 1975), a rational choice approach, suggests we experience an increased dependence as we age and must increasingly submit to the will of others because we have fewer ways of compelling others to submit to us. Indeed, inasmuch as relationships are based on mutual exchanges, as the elderly become less able to exchange resources, they will see their social circles diminish. In this model, the only means to avoid being discarded is to engage in resource management, like maintaining a large inheritance or participating in social exchange systems via child care. In fact, the theory may depend too much on the assumption that individuals are calculating. It is often criticized for affording too much emphasis to material exchange and devaluing non-material assets such as love and friendship.

Symbolic interactionists stress that the changes associated with old age, in and of themselves, have no inherent meaning. Nothing in the nature of aging creates any particular, defined set of attitudes. Rather, attitudes toward the elderly are rooted in society. 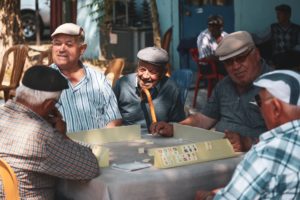 One microanalytical theory is Rose’s (1962) subculture of aging theory, which focuses on the shared community created by the elderly when they are excluded (due to age), voluntarily or involuntarily, from participating in other groups. This theory suggests that elders will disengage from society and develop new patterns of interaction with peers who share common backgrounds and interests. For example, a group consciousness may develop within such groups as AARP around issues specific to the elderly like the Medicare “doughnut hole,” focused on creating social and political pressure to fix those issues. Whether brought together by social or political interests, or even geographic regions, elders may find a strong sense of community with their new group.

Another theory within the symbolic interaction perspective is selective optimization with compensation theory. Baltes and Baltes (1990) based their theory on the idea that successful personal development throughout the life course and subsequent mastery of the challenges associated with everyday life are based on the components of selection, optimization, and compensation. Though this happens at all stages in the life course, in the field of gerontology, researchers focus attention on balancing the losses associated with aging with the gains stemming from the same. Here, aging is a process and not an outcome, and the goals (compensation) are specific to the individual. 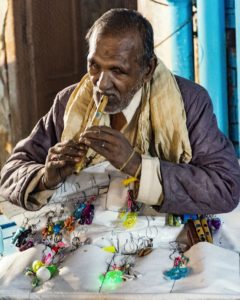 According to this theory, our energy diminishes as we age, and we select (selection) personal goals to get the most (optimize) for the effort we put into activities, in this way making up for (compensation) the loss of a wider range of goals and activities. In this theory, the physical decline postulated by disengagement theory may result in more dependence, but that is not necessarily negative, as it allows aging individuals to save their energy for the most meaningful activities. For example, a professor who values teaching sociology may participate in a phased retirement, never entirely giving up teaching, but acknowledging personal physical limitations that allow teaching only one or two classes per year.

Swedish sociologist Lars Tornstam developed a symbolic interactionist theory called gerotranscendence: the idea that as people age, they transcend the limited views of life they held in earlier times. Tornstam believes that throughout the aging process, the elderly become less self-centered and feel more peaceful and connected to the natural world. Wisdom comes to the elderly, Tornstam’s theory states, and as the elderly tolerate ambiguities and seeming contradictions, they let go of conflict and develop softer views of right and wrong (Tornstam, 2005). 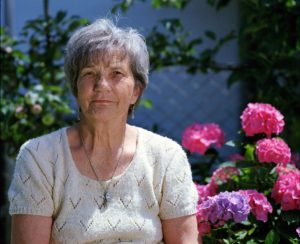 Tornstam does not claim that everyone will achieve wisdom in aging. Some elderly people might still grow bitter and isolated, feel ignored and left out, or become grumpy and judgmental. Symbolic interactionists believe that, just as in other phases of life, individuals must struggle to overcome their own failings and turn them into strengths.