Brainstorming, like freewriting, is a prewriting technique designed to bring subconscious ideas into consciousness. It’s a good technique to use when you know a general subject you’re interested in writing about but don’t exactly know what aspect of the subject you want to pursue. Brainstorming is like a stream-of-consciousness technique in which you rapidly record all ideas related to a general subject. All ideas are equally acceptable; the purpose of brainstorming is to identify as many ideas related to the subject as possible. 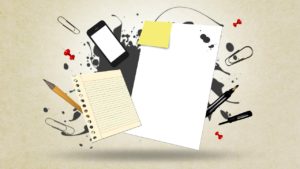 Most likely you have either experienced brainstorming in a business setting or have seen it portrayed on television or film: the ad exec holds up a product and says to the advertising team, “All right, people, let’s pitch ideas to sell this soap!,” and a person standing by a flip chart jots down ideas frantically as employees shout them out.

Brainstorming also involves a second step. Once you’ve exhausted your ideas about the subject, you need to go back to those ideas and review them, crossing some off, linking others that are related, and marking some that seem more important than others. You can group and re-group ideas that you’ve generated, and perhaps decide to pursue some ideas further through more brainstorming or other types of prewriting.

There are many ways in which the writer could work with these ideas. Some of the ideas fall into logical groups (e.g., “chicken,” “vegetable,” and “mediterranean” are types of soup). Other ideas can be developed through more prewriting. For example, the writer could take one of the ideas–soup etiquette–and generate a list of the different, accepted ways of eating soup in various parts of the country (something that might eventually turn into a humorous essay and a commentary on regional cultures). Or the writer could decide that a topic such as medicinal properties of soup merited further research and might ask a series of questions to further narrow that topic and generate a research question. And the writer might cross out some ideas that don’t seem useful for the writing’s purpose (e.g., “soup recipes” may not be appropriate for a college-level analytical research paper). Any of these next steps is appropriate.