Freewriting helps you identify subjects in which you are interested. It assumes that you know your interests subconsciously but may not be able to identify them consciously, and it assumes that you can bring your interests into consciousness by writing about them (as writing equals thinking). Freewriting is like stream-of-consciousness writing in which you write down whatever happens to be in your thoughts at the moment. After you do a number of freewritings, you may find that you have come back to certain subjects again and again. Repeated subjects are good for further development through writing, as they obviously are important in your thoughts. 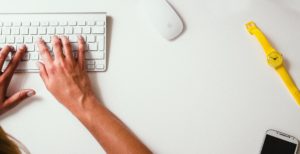 To freewrite, use your computer or get paper and pencil, whatever is more comfortable for you. Get a kitchen timer or a watch. Write down whatever comes into your head during five minutes without concerning yourself with complete thoughts, whole sentences, or correct spelling or punctuation. Don’t even be concerned about making sense in the writing. Just concentrate on recording your thoughts and filling as much space as possible before the five minutes elapse. If you can’t think of anything to write, just write “don’t know don’t know” until you have other thoughts. If you think that this exercise is stupid, then write “this is stupid this is stupid” until you have other thoughts. Remember, the purpose of freewriting is to fill as much space with as many words as possible in the five minutes of writing time. After the first five minutes, rest a minute and read over what you have written, then follow the procedure at least two more times. Stop at this point and do something else. Do another series of five-minute freewritings later in the day. You may be able to discern common threads (repeated ideas) after you do a number of freewritings. The ideas you repeat are good ones for essays as they obviously are ideas that interest you.

Read the following set of three freewritings. Can you find recurrent thoughts that would be interesting for the writer to develop?

freewriting. don’t know. don’t know. this is harder than I thought it would be. worried. what if I don’t have any ideas to bring out. the writer’s perpetual concern–lack of ideas. Cliches. wonder how they got started? had meaning at one time. say “every dog has his day” now and people will jump at you for using sexist language. don’t know. don’t know. don’t know. don’t know. hear the timer ticking. time. so much to do and so little time to do it in. what is time? arbitrary or not? different for different people. so many people pressed for time now. wonder if time went more slowly in grandparents’ day, if they needed 24 hrs. to do what we now do in 12. they had to use washboards, coal heat. greenhouse effect. are we greenhousing? greenhouse should have a nice, flowering plant connotation, not self-destruction. destruction by plants. Little Shop of Horrors. plants going crazy. at least the weeds in the garden do.

do not like bugs in summer. flies and mosquitoes the worst. Read somewhere that June is “kill the filthy fly” month. I agree. hate those large flies that buzz you, usually when you’re trying to eat lunch. read about cluster flies recently. they seem to cluster around your coffee when you go out of the room. then the big question, did they dip into it or not? mosquitoes as bad at night. like divebombers in your ears. don’t know. don’t know. don’t know. there are other annoyances, part of everyday life. call waiting, caller id, especially when you’re on the calling end. telephone solicitors. door-to-door salespeople. rude people in general. the person in the express line at the supermarket with 20 items in the cart. could go on about this one.

One obvious topic for this writer seems to be “time,” or the different ways in which we perceive time (adult vs. children’s perception of time, how time is counted in sporting events, etc.). “Annoyances” may be another topic, as the writer mentions that he/she “could go on about this one.” Actually, any topic mentioned here is a possibility for an essay (“bugs,” “cliches,” “greenhouse effect,” “puns”); the choice depends on the writer’s purpose (research or non-research writing?), interests (for which topic can I most easily generate information?), audience (what will interest my readers?), and parameters (what is the type of writing assigned?).

Freewriting is most often used to develop a topic, but it can also be used if you have a topic and don’t quite know how to approach it, as shown in the following video.  It’s a useful writing strategy.