Chapter 2: The Legal System in the United States

The requirement of proof beyond a reasonable doubt has this vital role in our criminal procedure for cogent reasons. The accused, during a criminal prosecution, has at stake interests of immense importance, both because of the possibility that he may lose his liberty upon conviction and because of the certainty that he would be stigmatized by the conviction.

—In re: Winship, cited in Section 2 “Burden of Proof in a Criminal Prosecution”

The Scope of Federal Law

The government’s power to regulate comes from the US Constitution. The federal government derives its authority to create law from Article I, § 8, which discusses federal Congress’s exclusive or delegated powers. These include the power to regulate currency and coin, establish a post office, promote science and art by regulating the rights to discoveries and writings, declare war and raise armies, conduct foreign affairs, regulate interstate and foreign commerce, and make laws necessary and proper to execute other powers expressly granted in the Constitution. Courts have interpreted the last two powers mentioned in the commerce clause and the necessary and proper clause to be the broadest sources of federal regulatory authority.

To simplify and summarize precedent defining federal regulatory authority, federal laws are meant to regulate in two areas. First, federal laws regulate issues that concern the country, rather than just one city, county, or state. The federal government regulates in the area of foreign affairs, for example, because this affects the United States of America, not just one particular region. Second, federal laws regulate commerce, which is economic activity, that crosses from state to state. Some common examples are television broadcasts, the Internet, and any form of transportation such as the airlines.

The original intent was for the federal government to be a limited government, with the bulk of regulatory authority residing in the states. The only crimes Congress is specifically authorized to punish are piracies and felonies on the high seas, counterfeiting, and treason; however, case precedent has expanded the federal government’s power to enact criminal laws based on the commerce clause and the necessary and proper clause (McCulloch v. Maryland, 2010). Still, there must be some connection to an issue of national character and interstate commerce, or the federal government will overstep its authority. In general, federal criminal laws target conduct that occurs on federal property or conduct involving federal employees, currency, coin, treason, national security, rights secured by the Constitution, or commerce that crosses state lines. Currently, over five hundred crimes are listed in Part I, Title 18 of the United States Code, which codifies criminal laws for the federal government. 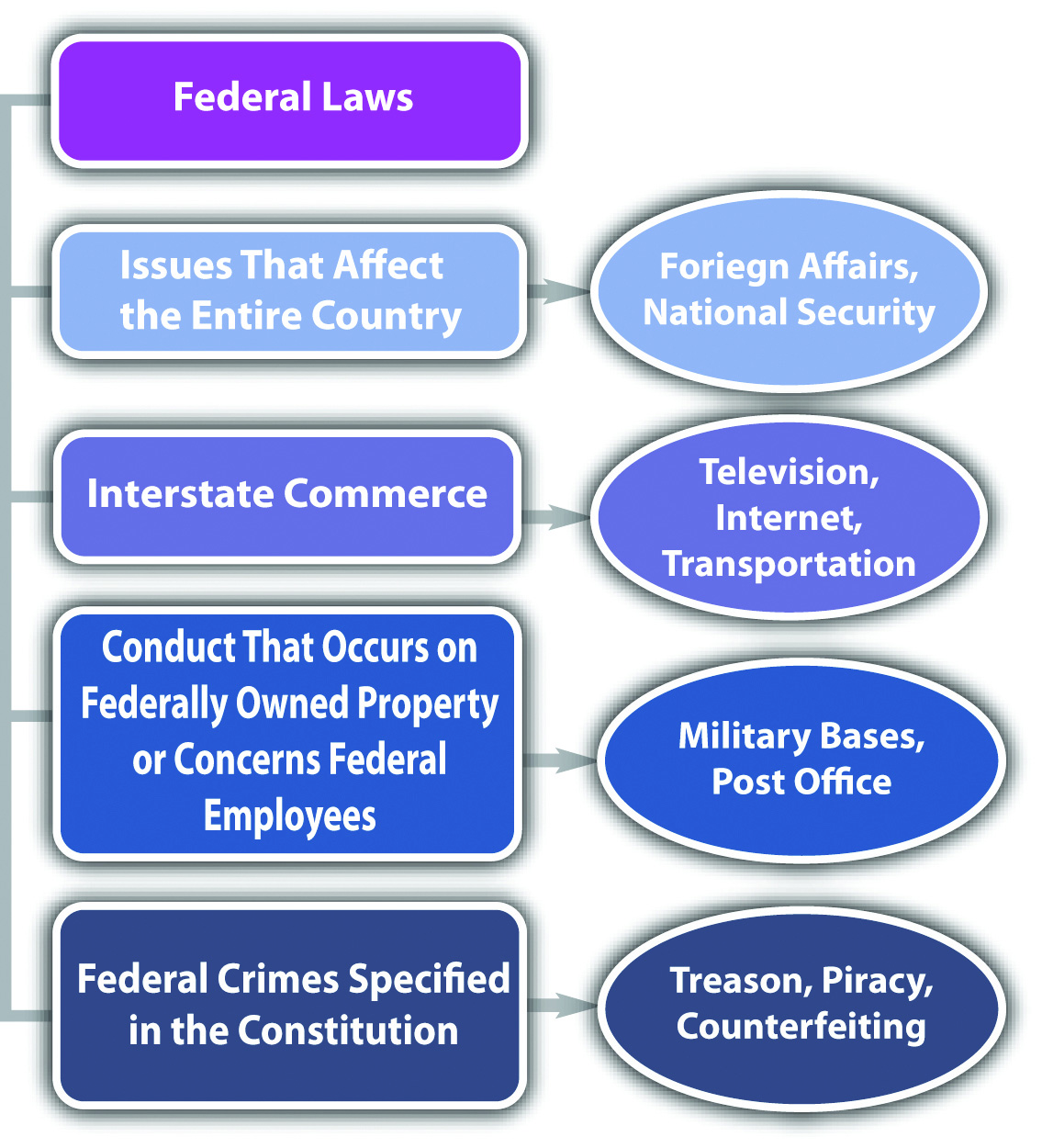 The Scope of State Law

The US Constitution designates the states as the primary regulatory authority. This is clarified in the Tenth Amendment, which reads, “The powers not delegated to the United States by the Constitution, nor prohibited to it by the States, are reserved to the States respectively, or the people.” State laws are also supposed to regulate in two areas. First, state laws regulate issues of a local character or concern. A state may regulate, for example, its water ownership and use because water can be scarce and is not generally provided to other states. Second, state laws regulate issues or things that remain within a state’s border. A state generally regulates, for example, the operation of a small business whose products are only sold locally and not shipped out of the state.

Federal laws are the same in every state, but state laws differ from state to state. Something that is legal in one state may be illegal in another state. This inconsistency makes our system of federalism complicated for students (and lawyers). However, with a country as large and varied as the United States, it is sensible to allow each state to choose for itself which laws will be most suitable.

The power to enact criminal laws belongs almost exclusively to the states. This is because of the Tenth Amendment, which vests in states a police power to provide for the health, safety, and welfare of state citizens. Approximately 90 percent of all criminal laws are state, rather than federal. Often, federal crimes are also state crimes and can be prosecuted and punished by both the state and federal government without violating the principle of double jeopardy.

Example of the Diversity of State Laws 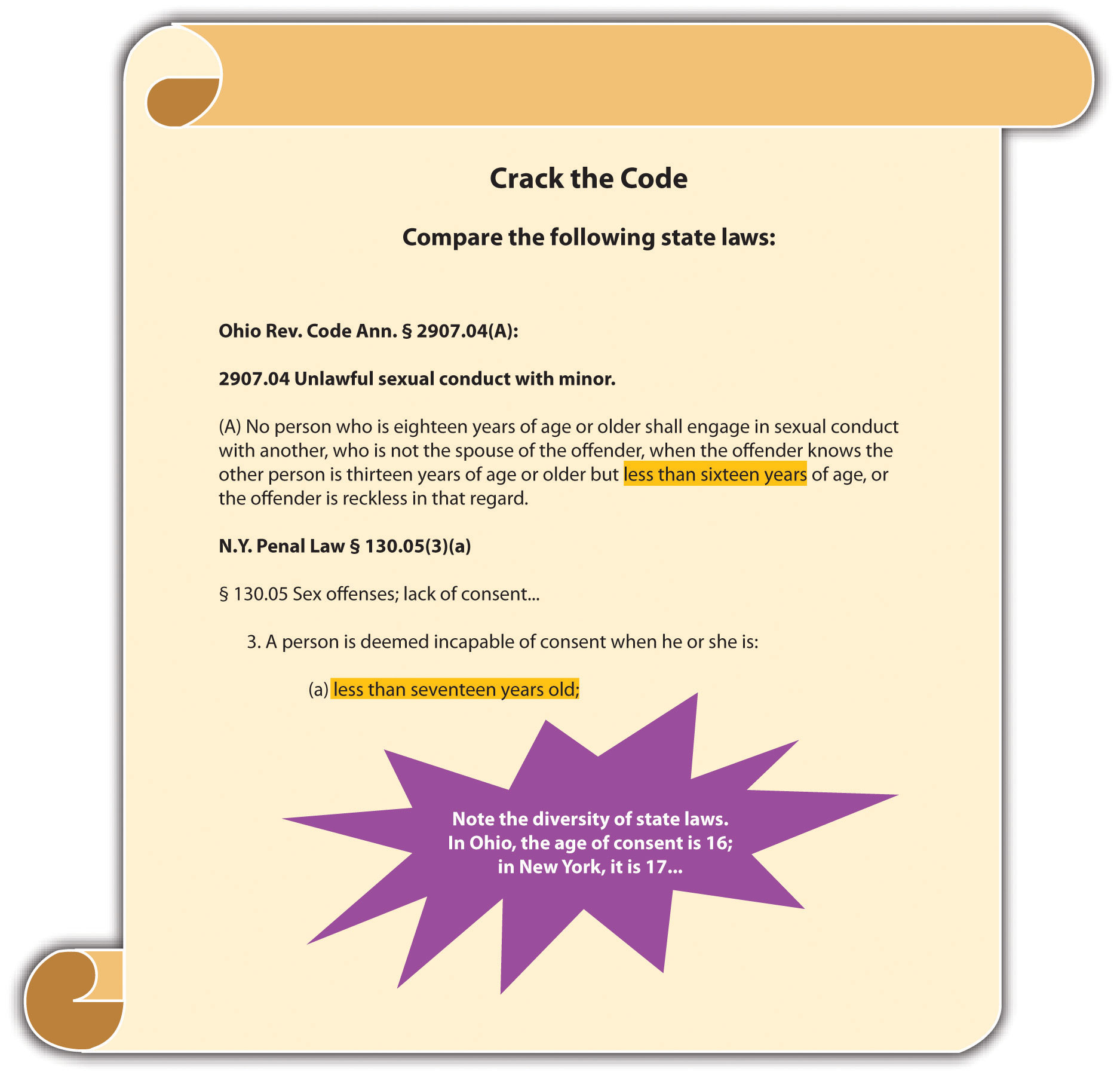 Our legal system is divided up to conform to the principle of federalism, so a potential exists for conflict between federal law and state law. A federal law may make something illegal; a state law may insist that it is legal. Whenever a conflict occurs between federal and state law, courts must follow the federal law. This is called federal supremacy. As the Supremacy Clause of Article VI of the federal Constitution states, “This Constitution, and the Laws of the United States which shall be made in Pursuance thereof; and all Treaties made, or which shall be made, under the Authority of the United States, shall be the supreme Law of the Land; and the Judges in every State shall be bound thereby, any Thing in the Constitution or Laws of any State to the Contrary notwithstanding.”

In Washington and several other states, an individual may possess and use marijuana for medicinal purposes with a prescription (Washington State Medicinal Marijuana Act, 2010; ProCon.org, 2010). Federal law prohibits possession and use of marijuana under any circumstances (21 U.S.C., 2010). Technically, this could be a conflict that violates federal supremacy. Until the courts address the federal supremacy issue, however, medical marijuana statutes can continue to stay in effect. Read about a recent ruling regarding the constitutionality of Michigan’s medicinal marijuana law under the Supremacy Clause: http://www.pressandguide.com/articles/2011/04/09/news/doc4d9f557b8ab37805648033.txt. 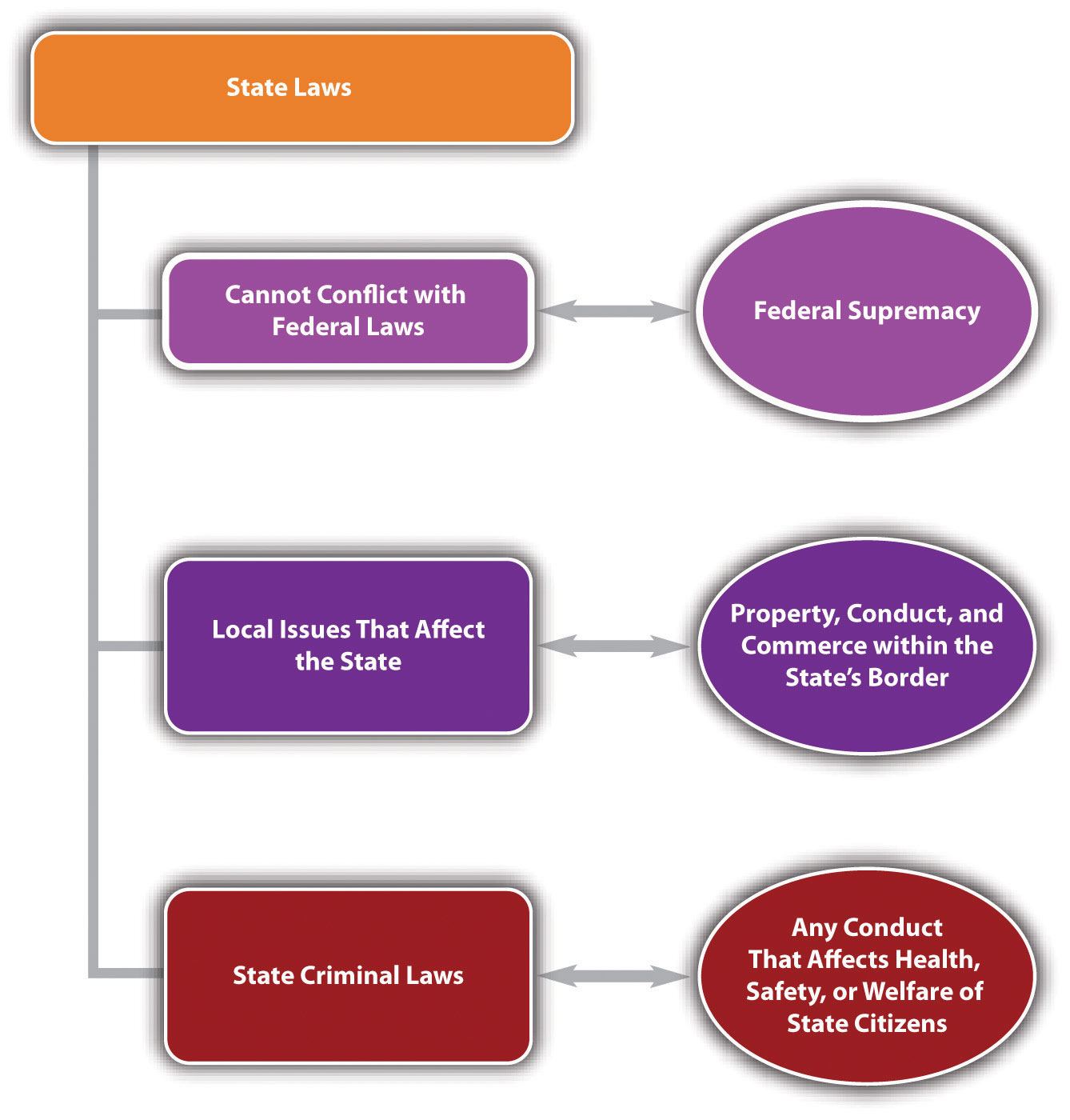 Can a State Regulate Immigration?

Arizona passed a comprehensive immigration law designed to seek out and deport illegal immigrants. This law created a national furor, and its detractors insisted it would lead to unethical racial profiling. The federal government attacked the law in Federal District Court (Archibold, R. C., 2010). Judge Susan Bolton issued a preliminary injunction that stopped enforcement of the sections of the law that required state law enforcement to check an immigrant’s status while enforcing other laws and that required immigrants to prove they were in the country legally or risk state charges (Archibold, R. C., 2010). Read the District Court’s preliminary injunction ruling, which is available at this link: http://graphics8.nytimes.com/packages/pdf/national/20100729_ARIZONA_DOC.pdf.

Read about the most recent ruling on Arizona’s immigration law by the US Court of Appeals for the Ninth Circuit: http://latindispatch.com/2011/05/10/arizonas-jan-brewer-to-appeal-immigration-law-to-u-s-supreme-court/.

This video is the Arizona governor’s appeal of the district court preliminary injunction: