3.2 The Due Process and Equal Protection Clauses

The Bill of Rights was originally written to apply to the federal government. However, US Supreme Court precedent has held that any constitutional amendment that is implicit to due process’s concept of ordered liberty must be incorporated into the Fourteenth Amendment’s protections and applied to the states (Duncan v. Louisiana, 2010). This doctrine is called selective incorporation, and it includes virtually all the constitutional protections in the Bill of Rights. Thus although the original focus of the Bill of Rights may have been limiting the federal government, modern interpretations of the Constitution ensure that its protections also extend to all levels of state and local government.

The Meaning of Due Process of Law

Void for vagueness challenges the wording of a statute under the due process clause. A statute is void for vagueness if it uses words that are indefinite or ambiguous. Statutes that are not precisely drafted do not provide notice to the public of exactly what kind of behavior is criminal. In addition, and more important, they give too much discretion to law enforcement and are unevenly enforced (U.S. v. White, 2010). With a void for vagueness challenge, the statute must be so unclear that “men of common intelligence must guess at its meaning,” (Connally v. General Construction Co., 2010) which is an objective standard.

Example of a Statute That Is Void for Vagueness

Example of an Overbroad Statute

Figure 3.3 The Due Process Clause 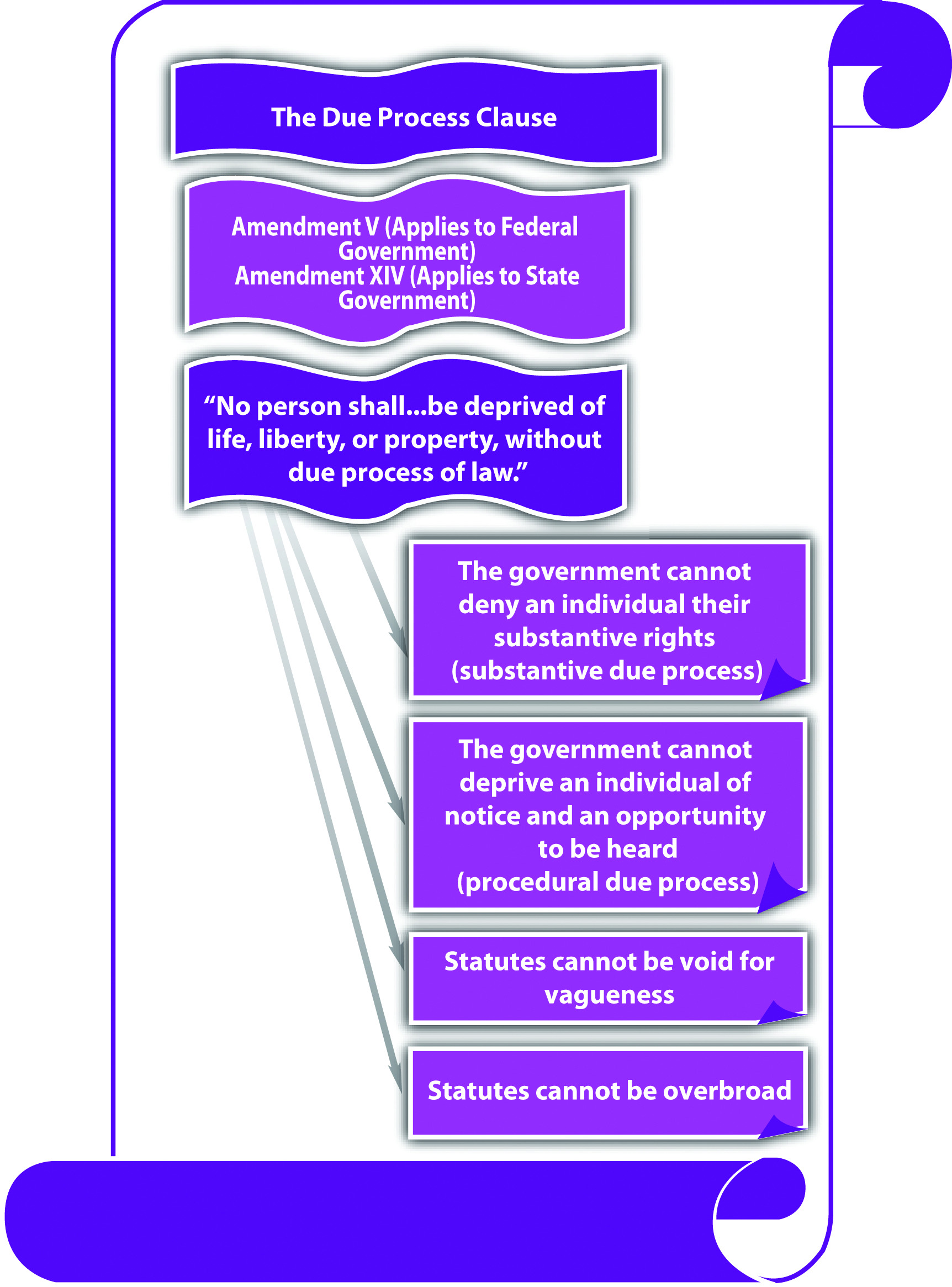 The Fourteenth Amendment states in relevant part, “nor shall any State…deny to any person within its jurisdiction the equal protection of the laws.” The equal protection clause applies to the state government. State constitutions generally have a similar provision (California Constitution, 2010). The equal protection clause prevents the state government from enacting criminal laws that discriminate in an unreasonable and unjustified manner. The Fifth Amendment due process clause prohibits the federal government from discrimination if the discrimination is so unjustifiable that it violates due process of law (Bolling v. Sharpe, 2010).

The prohibition on governmental discrimination is not absolute; it depends on the class of persons targeted for special treatment. In general, court scrutiny is heightened according to a sliding scale when the subject of discrimination is an arbitrary classification. Arbitrary means random and often includes characteristics an individual is born with, such as race or national origin. The most arbitrary classifications demand strict scrutiny, which means the criminal statute must be supported by a compelling government interest. Statutes containing classifications that are not arbitrary must have a rational basis and be supported by a legitimate government interest.

Criminal statutes that have a rational basis for discrimination and are supported by a legitimate government interest can discriminate, and frequently do. Criminal statutes that punish felons more severely when they have a history of criminal behavior, for example, three-strikes statutes, are supported by the legitimate government interests of specific and general deterrence and incapacitation. Note that the basis of the discrimination, a criminal defendant’s status as a convicted felon, is rational, not arbitrary like race. Thus although these statutes discriminate, they are constitutional pursuant to the equal protection clause. 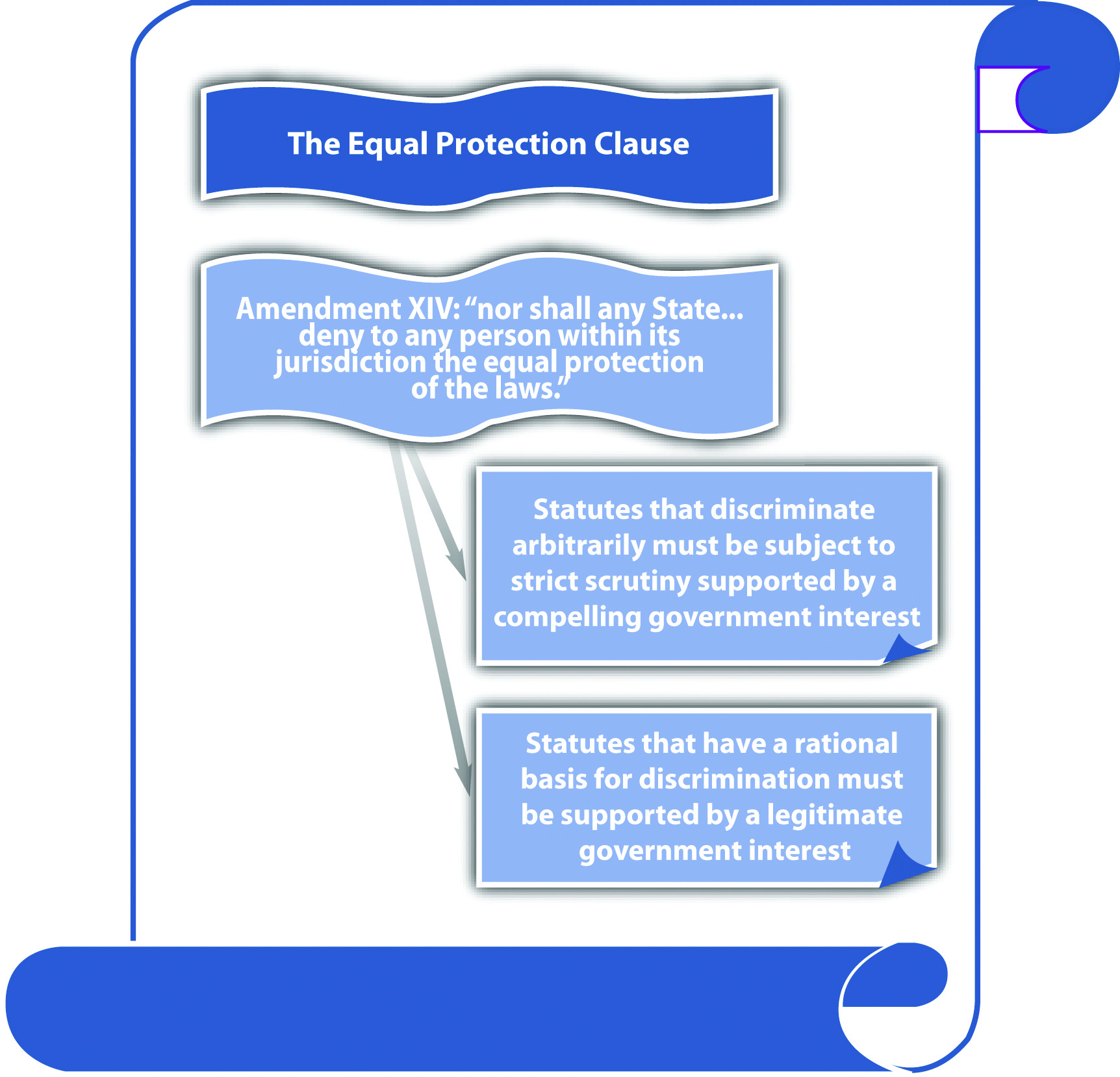