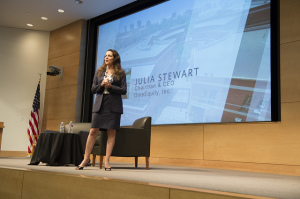 Here is the golden rule: Dress appropriately for the situation. You don’t need to sport a power tie (the predictable red tie politicians wore in the 1980s), but you should be comfortable and confident knowing that you look good.

With the exception of wearing formal black-tie tuxedo to a hockey game, it is good practice to dress a bit more formal than less. Err on the side of formal. Most class speeches would be best in business casual (which can vary from place to place and in time). The culture or standards of the audience should be considered. For men, it is usually a button-down shirt and casual dress pants. For women, it may be skirt or slacks and blouse/shirt.

There are exceptions depending on the speech. A student once arrived in pajamas to deliver his 9 a.m. speech. At first, I thought he got up too late to dress for class. However, his speech was on Sleep Deprivation, and his costume was deliberate. What he wore contributed to his speech.

If you have long hair, be sure it is out of the way so it won’t cover your face. Flipping hair out of your face is very distracting, so it is wise to secure it with clips, gel, or some other method. Be sure you can be seen, especially your eyes and your mouth, even as you glance down to the podium.

Think of it as an interview…just like in an interview, you will want to make a good first impression. The corporate culture of the business will determine the dress. Always dress at the level of the person conducting the interview. For example, a construction foreman (or project manager) will conduct an interview to hire you as a carpenter. Do not dress like a carpenter; dress like the project manager.

Actors know when they audition, the role is won by the time they step into the room. A speaker can launch success by stepping confidently to the podium.

Be tidy and clean. If you appear as though you took time to prepare because your speech is important, then your audience will recognize and respect what you have to say.

Overall movement and specific gestures are integral to a speech. Body stance, gestures and facial expressions can be generally categorized as body language. Movement should be relaxed and natural, and not excessive. How you move takes practice. Actors usually have the advantage of directors helping to make decisions about movement, but a good objective listener or a rehearsal in front of a large mirror can yield productive observations. 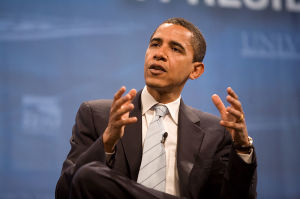 Moving around the performance space can be a very powerful component of a speech; however, it should be rehearsed as part of the presentation. Too much movement can be distracting. This is particularly true if the movement appears to be a result of nervousness. Avoid fidgeting, stroking your hair, and any other nervousness-related movement.

Among the traditional common fears of novice speakers is not knowing what to do with one’s hands. Sometimes the speaker relies on clutching to the podium or keeping hands in pockets. Neither is a good pose. From my own observation, hand gestures are very common in Italy. We Italians can be seen in conversation from across the street, and an observer can often tell what is being said. There is no need to imitate an Italian in delivering a speech, but hand movement and the energy that the movement represents, can help hold attention as well as help express the message.

An actor practices using his whole body for expression, and regularly practices physical exercises to keep the body and hands and arms relaxed and in motion. An actor’s hand gestures are developed in rehearsal. A speaker’s gestures should also be considered during practice.

During the period when elocution was taught, hand gestures were regimented like a sign language. This is nonsense. Like inflections, gestures and movement should be organic and spontaneous, not contrived. If there is a hint of artificiality in your presentation, you will sacrifice your credibility.

Using only your hands, convey the following:

Most readers are very familiar with emoticons like these: 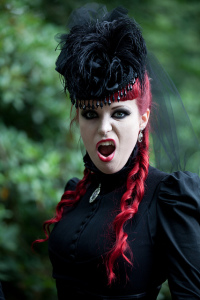 Emoticons were not casual inventions, but graphic depictions of facial expressions that convey various meanings of emotions. They are based on a nearly universal language of expression that we begin learning soon after birth. We smile, we frown, we roll our eyes, and we wink. We open eyes wide with astonishment. We raise our eyebrows…occasionally one at a time, in suspicion; both, in astonishment. Sometimes we pucker our lips, either to offer a kiss or express disapproval, disappointment, or grave concern.

I pretty much try to stay in a constant state of confusion just because of the expression it leaves on my face. – Johnny Depp

Since facial expression is a valid form of communication, it is integral to delivering a speech. The face supports the text, and the speaker’s commitment to the material is validated. The press scrutinizes a politician for every twitch of insincerity. Detectives have created a science of facial communication for interviewing suspects. Like inflections, gestures and movement: facial expressions should be organic and spontaneous, not contrived. If there is a hint of artificiality in your expression, you will sacrifice your credibility.

While looking in a mirror, try to express these thoughts without words:

Next to clearly speaking an organized text, eye contact is another very important element of speaking. An audience must feel interested in the speaker, and know the speaker cares about them.

Whether addressing an audience of 1000 or speaking across a “deuce” (table for two), eye contact solidifies the relationship between the speaker and audience. Good eye contact takes practice. The best practice is to be able to scan the audience making each member believe the speaker is speaking to him or her.

This is a person who bobs his or her head looking down on the notes and up to the audience in an almost rhythmic pattern.

A person who looks over the heads of his or her audience to avoid looking at any individual.

A person who looks at one or two audience members or who only looks in one direction.

The eyes are called the windows to the soul, and the importance of eye contact in communication cannot be overemphasized. Ideally, a speaker should include 80% to 90% of the delivery time with eye contact.

Eye contact is so important that modern teleprompters are designed to allow the speaker to look at the audience while actually reading the speech. The Presidential Teleprompter (two angled pieces of glass functioning like a periscope) is used so the politician can “connect” to the audience without missing a single syllable. Audience members will be much more attentive and responsive if they believe the speech is directed to them.

With good eye contact, the speaker can also observe and gauge the attention and response of the audience. This is actually part of the feedback process of communication. The ideal is that the audience is not overly aware of the speaker using notes.

How do you develop good eye contact? First, practice the speech with a generous amount of eye contact. Second, know the speech well enough to only periodically (and quickly) glance at your notes. Third, prepare your notes so they can be easily read and followed without hesitation.

There are no secrets to success. It is the result of preparation, hard work, and learning from failure. – Colin Powell