Chapter 9 Introductions Matter: How to Begin a Speech Effectively

The Importance of an Introduction

The first major purpose of an introduction is to gain your audience’s attention and make them interested in what you have to say. One of the biggest mistakes that novice speakers make is to assume that people will naturally listen because the speaker is speaking. While many audiences may be polite and not talk while you’re speaking, actually getting them to listen to what you are saying is a completely different challenge. Let’s face it—we’ve all tuned someone out at some point because we weren’t interested in what they had to say. If you do not get the audience’s attention at the outset, it will only become more difficult to do so as you continue speaking. We’ll talk about some strategies for grabbing an audience’s attention later on in this chapter.

State the Purpose of Your Speech

The second major function of an introduction is to reveal the purpose of your speech to your audience. Have you ever sat through a speech wondering what the basic point was? Have you ever come away after a speech and had no idea what the speaker was talking about? An introduction is important because it forces the speaker to be mindfully aware of explaining the topic of the speech to the audience. If the speaker doesn’t know what her or his topic is and cannot convey that topic to the audience, then we’ve got really big problems! Robert Cavett, the founder of the National Speaker’s Association, used the analogy of a preacher giving a sermon when he noted, “When it’s foggy in the pulpit, it’s cloudy in the pews.”

As we discussed in Chapter 6 “Finding a Purpose and Selecting a Topic”, the specific purpose is the one idea you want your audience to remember when you are finished with your speech. Your specific purpose is the rudder that guides your research, organization, and development of main points. The more clearly focused your purpose is, the easier your task will be in developing your speech. In addition, a clear purpose provides the audience with a single, simple idea to remember even if they daydream during the body of your speech. To develop a specific purpose, you should complete the following sentence: “I want my audience to understand that…” Notice that your specific speech purpose is phrased in terms of expected audience responses, not in terms of your own perspective.

One of the most researched areas within the field of communication has been Aristotle’s concept of ethos or credibility. First, and foremost, the concept of credibility must be understood as a perception of receivers. You may be the most competent, caring, and trustworthy speaker in the world on a given topic, but if your audience does not perceive you as credible, then your expertise and passion will not matter. As public speakers, we need to make sure that we explain to our audiences why we are credible speakers on a given topic.

James C. McCroskey and Jason J. Teven have conducted extensive research on credibility and have determined that an individual’s credibility is composed of three factors: competence, trustworthiness, and caring/goodwill.[1] Competence is the degree to which a speaker is perceived to be knowledgeable or expert in a given subject by an audience member. Some individuals are given expert status because of positions they hold in society. For example, Dr. Regina Benjamin, the US Surgeon General, is expected to be competent in matters related to health and wellness as a result of being the United States’ top physician. 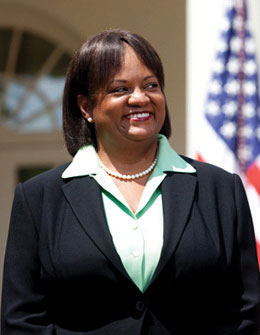 But what if you do not possess a fancy title that lends itself to established competence? You need to explain to the audience why you are competent to speak on your topic. Keep in mind that even well-known speakers are not perceived as universally credible. US Surgeon General Regina Benjamin may be seen as competent on health and wellness issues, but may not be seen as a competent speaker on trends in Latin American music or different ways to cook summer squash. Like well-known speakers, you will need to establish your credibility on each topic you address, so establishing your competence about the energy efficiency of furnace systems during your informative speech does not automatically mean you will be seen as competent on the topic of organ donation for your persuasive speech.

The second factor of credibility noted by McCroskey and Teven is trustworthiness, or the degree to which an audience member perceives a speaker as honest. Nothing will turn an audience against a speaker faster than if the audience believes the speaker is lying. When an audience does not perceive a speaker as trustworthy, the information coming out of the speaker’s mouth is automatically perceived as deceitful. The speaker could be 100 percent honest, but the audience will still find the information suspect. For example, in the summer of 2009, many Democratic members of Congress attempted to hold public town-hall meetings about health care. For a range of reasons, many of the people who attended these town-hall meetings refused to let their elected officials actually speak because the audiences were convinced that the Congressmen and Congresswomen were lying.

In these situations, where a speaker is in front of a very hostile audience, there is little a speaker can do to reestablish that sense of trustworthiness. These public town-hall meetings became screaming matches between the riled-up audiences and the congressional representatives. Some police departments actually ended up having to escort the representatives from the buildings because they feared for their safety. Check out this video from CNN.com to see what some of these events actually looked like. We hope that you will not be in physical danger when you speak to your classmates or in other settings, but these incidents serve to underscore how important speaker trustworthiness is across speaking contexts.

Caring/goodwill is the final factor of credibility noted by McCroskey and Teven. Caring/goodwill refers to the degree to which an audience member perceives a speaker as caring about the audience member. As noted by Wrench, McCroskey, and Richmond, “If a receiver does not believe that a source has the best intentions in mind for the receiver, the receiver will not see the source as credible. Simply put, we are going to listen to people who we think truly care for us and are looking out for our welfare.”[2] As a speaker, then, you need to establish that your information is being presented because you care about your audience and are not just trying to manipulate them. We should note that research has indicated that caring/goodwill is the most important factor of credibility. This means that if an audience believes that a speaker truly cares about the audience’s best interests, the audience may overlook some competence and trust issues.

The fourth major function of an introduction is to establish a connection between the speaker and the audience, and one of the most effective means of establishing a connection with your audience is to provide them with reasons why they should listen to your speech. The idea of establishing a connection is an extension of the notion of caring/goodwill. In the chapters on Language and Speech Delivery, we’ll spend a lot more time talking about how you can establish a good relationship with your audience. However, this relationship starts the moment you step to the front of the room to start speaking.

Instead of assuming the audience will make their own connections to your material, you should explicitly state how your information might be useful to your audience. Tell them directly how they might use your information themselves. It is not enough for you alone to be interested in your topic. You need to build a bridge to the audience by explicitly connecting your topic to their possible needs.

The last major function of an introduction is to preview the main ideas that your speech will discuss. A preview establishes the direction your speech will take. We sometimes call this process signposting because you’re establishing signs for audience members to look for while you’re speaking. In the most basic speech format, speakers generally have three to five major points they plan on making. During the preview, a speaker outlines what these points will be, which demonstrates to the audience that the speaker is organized.

A study by Baker found that individuals who were unorganized while speaking were perceived as less credible than those individuals who were organized.[3] Having a solid preview of the information contained within one’s speech and then following that preview will definitely help a speaker’s credibility. It also helps your audience keep track of where you are if they momentarily daydream or get distracted.