When the concept of seafloor spreading came along, scientists recognized that it was the mechanism to explain how continents could move around Earth’s surface. Scientific data and observation now allows us to merge the ideas of continental drift and seafloor spreading into the theory of plate tectonics.Seafloor and continents move around on Earth’s surface, but what is actually moving? What portion of the Earth makes up the “plates” in plate tectonics? This question was also answered because of technology developed during the Cold War. The plates are made up of the lithosphere. During the 1950s and early 1960s, scientists set up seismograph networks to see if enemy nations were testing atomic bombs. These seismographs also recorded all of the earthquakes around the planet. The seismic records could be used to locate an earthquake’s epicenter, the point on Earth’s surface directly above the place where the earthquake occurs. Earthquake epicenters outline these tectonic plates. Mid-ocean ridges, trenches, and large faults mark the edges of these plates along with where earthquakes occur. 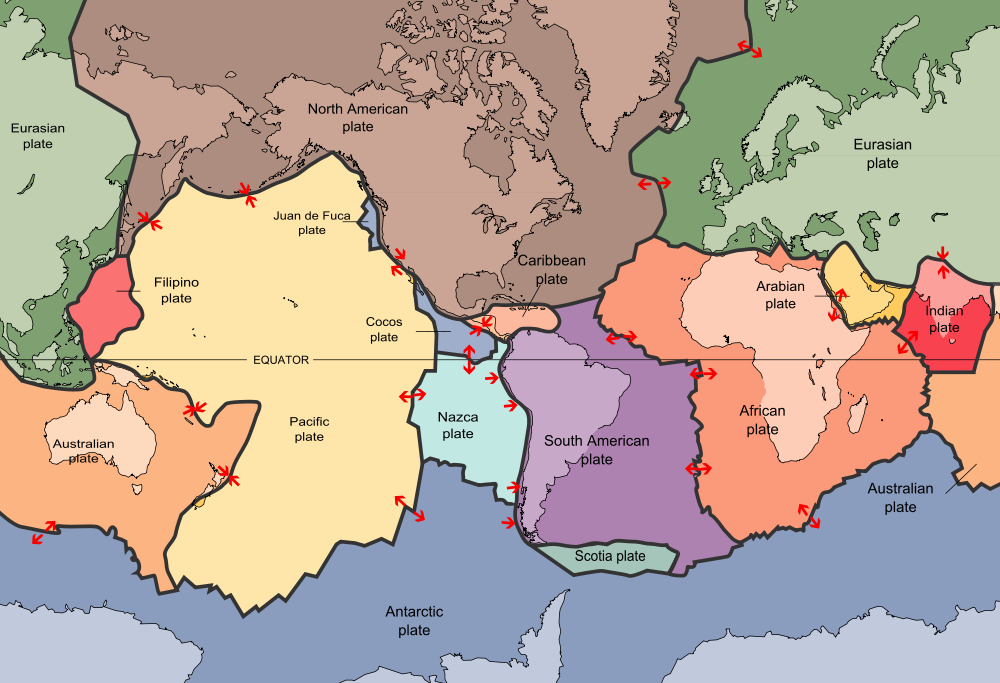 The lithosphere is divided into a dozen major and several minor plates. The plates’ edges can be drawn by connecting the dots that mark earthquakes’ epicenters. A single plate can be made of all oceanic lithosphere or all continental lithosphere, but nearly all plates are made of a combination of both. Movement of the plates over Earth’s surface is termed plate tectonics. Plates move at a rate of a few centimeters a year, about the same rate fingernails grow.

If seafloor spreading drives the plates, what drives seafloor spreading? Picture two convection cells side-by-side in the mantle. Hot mantle from the two adjacent cells rises at the ridge axis, creating new ocean crust. The top limb of the convection cell moves horizontally away from the ridge crest, as does the new seafloor. The outer limbs of the convection cells plunge down into the deeper mantle, dragging oceanic crust as well. This takes place at the deep sea trenches. The material sinks to the core and moves horizontally. The material heats up and reaches the zone where it rises again.