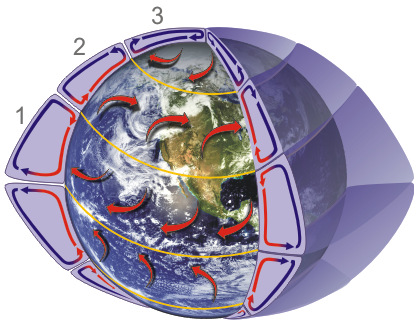 Let’s look at atmospheric circulation in the Northern Hemisphere as a result of the Coriolis Effect. Air rises at the equator, but as it moves toward the pole at the top of the troposphere, it deflects to the right. (Remember that it just appears to deflect to the right because the ground beneath it moves.) At about 30oN latitude, the air from the equator meets air flowing toward the equator from the higher latitudes. This air is cool because it has come from higher latitudes. Both batches of air descend, creating a high pressure zone. Once on the ground, the air returns to the equator. This convection cell is called the Hadley Cell and is found between 0 degrees and 30 degrees N.

There are two more convection cells in the Northern Hemisphere. The Ferrell cell is between 30oN and 50o to 60oN. This cell shares its southern, descending side with the Hadley cell to its south. Its northern rising limb is shared with the Polar cell located between 50 degrees N to 60 degrees N and the North Pole, where cold air descends.

Global winds blow in belts encircling the planet. The global wind belts are enormous and the winds are relatively steady. These winds are the result of air movement at the bottom of the major atmospheric circulation cells, where the air moves horizontally from high to low pressure. Technology today allows anyone to see global wind patterns in real-time, such as Earth Wind Map. Take a look at the Earth Wind Map and determine what patterns you can see occurring in the atmosphere in real-time. Are low pressure systems rotating counter-clockwise in the Northern Hemisphere? Are high pressure systems rotating clockwise in the Northern Hemisphere? Can you see the global wind patterns over the Atlantic and Pacific Oceans? Also notice how the winds flow faster over water than over continents because of land friction.

Let’s look at the global wind belts in the Northern Hemisphere: 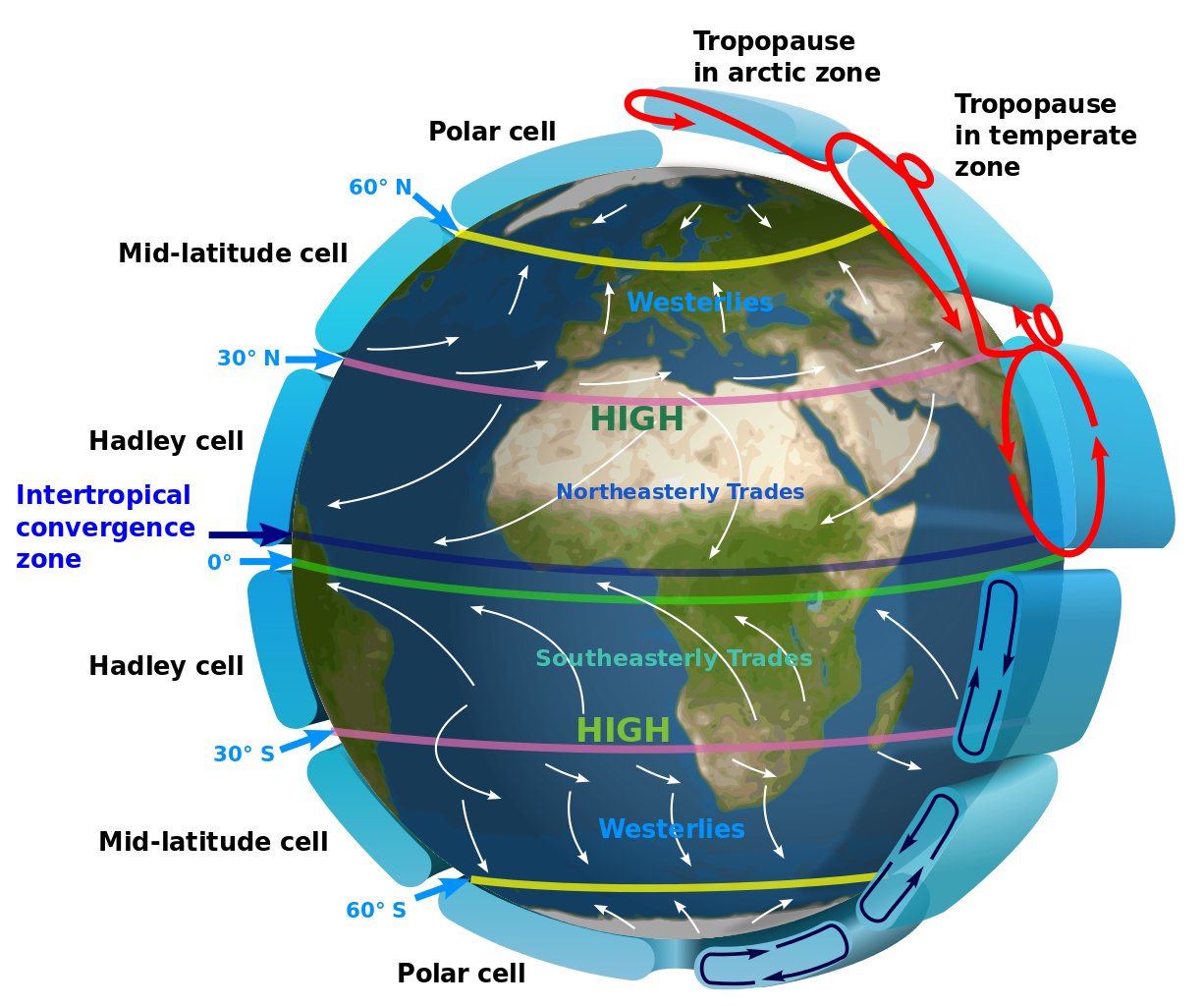 In the Hadley cell air should move north to south, but it is deflected to the right by Coriolis. So the air blows from northeast to the southwest. This belt is the trade winds, so called because at the time of sailing ships they were good for trade.

In the Ferrel cell air should move south to north, but the winds actually blow from the southwest. This belt is the westerly winds or westerlies. Why do you think a flight across the United States from San Francisco to New York City takes less time than the reverse trip?

Finally, in the Polar cell, the winds travel from the northeast and are called the polar easterlies. The wind belts are named for the directions from which the winds come. The westerly winds, for example, blow from west to east. These names hold for the winds in the wind belts of the Southern Hemisphere as well.