As Europe moved closer to war in the late 1930s, the United States Congress continued to demand American neutrality, but President Roosevelt and the American public began to support war with Nazi Germany by 1941.

Describe why the United States initially stayed out of the war

Lend-Lease Act
A program under which the United States supplied Free France, the United Kingdom, the Republic of China, and later the USSR and other Allied nations with food, oil, and materiel between 1941 and August 1945.
Kellogg–Briand Pact
A 1928 international agreement in which signatory states promised not to use war to resolve “disputes or conflicts of whatever nature or of whatever origin they may be, which may arise among them.”

In the wake of the First World War, non-interventionist tendencies of U.S. foreign policy gained ascendancy. The Treaty of Versailles and thus U.S. participation in the League of Nations, even with reservations, was rejected by the Republican-dominated Senate in the final months of Wilson’s presidency. A group of senators known as the Irreconcilables, identifying with both William Borah and Henry Cabot Lodge, had great objections regarding the clauses of the treaty which compelled America to come to the defense of other nations. Lodge, echoing Wilson, issued 14 Reservations regarding the treaty; among them, the second argued that America would sign only with the understanding that:

Nothing compels the United States to ensure border contiguity or political independence of any nation, to interfere in foreign domestic disputes regardless of their status in the League, or to command troops or ships without Congressional declaration of war.

While some of the sentiment was grounded in adherence to Constitutional principles, some bore a reassertion of nativist and inward-looking policy.

Although the U.S. was unwilling to commit to the League of Nations, they continued to engage in international negotiations and treaties. In August 1928, 15 nations signed the Kellogg-Briand Pact, brainchild of American Secretary of State Frank Kellogg and French Foreign Minister Aristide Briand. This pact, said to outlaw war and show the U.S. commitment to international peace, had its semantic flaws. For example, it did not hold the U.S. to the conditions of any existing treaties, still allowed European nations the right to self-defense, and stated that if one nation broke the Pact, it would be up to the other signatories to enforce it. The Kellogg–Briand Pact was more of a sign of good intentions on the part of the U.S. than a legitimate step towards the sustenance of world peace.

The economic depression that ensued after the Crash of 1929 also encouraged non-intervention. The country focused mostly on addressing the problems of the national economy while the rise of aggressive expansionism policies by Fascist Italy and the Empire of Japan led to conflicts such as the Italian conquest of Ethiopia and the Japanese invasion of Manchuria. These events led to ineffectual condemnations by the League of Nations, while official American response was muted. America also did not take sides in the brutal Spanish Civil War.

As Europe moved closer to war in the late 1930s, the U.S. Congress continued to demand American neutrality. Between 1936 and 1937, much to the dismay of President Roosevelt, Congress passed the Neutrality Acts. For example, in the final Neutrality Act, Americans could not sail on ships flying the flag of a belligerent nation or trade arms with warring nations. Such activities played a role in American entrance into World War I.

On September 1, 1939, Germany invaded Poland and Britain and France subsequently declared war on Germany, marking the start of World War II. In an address to the American people two days later, President Roosevelt assured the nation that he would do all he could to keep them out of war. However, his words showed his true goals. “When peace has been broken anywhere, the peace of all countries everywhere is in danger,” Roosevelt said. Even though he was intent on neutrality as the official policy of the U.S., he still echoed the dangers of staying out of the war. He also cautioned the American people to not let their wish to avoid war at all costs supersede the security of the nation.

The war in Europe split the American people into two camps: non-interventionists and interventionists. The sides argued over America’s involvement in this Second World War. The basic principle of the interventionist argument was fear of German invasion. By the summer of 1940, France suffered a stunning defeat by Germans, and Britain was the only democratic enemy of Germany. In a 1940 speech, Roosevelt argued, “Some, indeed, still hold to the now somewhat obvious delusion that we … can safely permit the United States to become a lone island … in a world dominated by the philosophy of force.” A national survey found that in the summer of 1940, 67% of Americans believed that a German-Italian victory would endanger the United States, that if such an event occurred 88% supported “arm[ing] to the teeth at any expense to be prepared for any trouble”, and that 71% favored “the immediate adoption of compulsory military training for all young men.”

Ultimately, the ideological rift between the ideals of the U.S. and the goals of the fascist powers empowered the interventionist argument. Writer Archibald MacLeish asked, “How could we sit back as spectators of a war against ourselves?” In an address to the American people on December 29, 1940, President Roosevelt said, “the Axis not merely admits but proclaims that there can be no ultimate peace between their philosophy of government and our philosophy of government.”

However, there were many who held on to non-interventionism. Although a minority, they were well-organized and had a powerful presence in Congress. Non-interventionists rooted a significant portion of their arguments in historical precedent, citing events such as Washington’s farewell address and the failure of World War I. “If we have strong defenses and understand and believe in what we are defending, we need fear nobody in this world,” Robert Maynard Hutchins, President of the University of Chicago, wrote in a 1940 essay. Isolationists believed that the safety of the nation was more important than any foreign war. 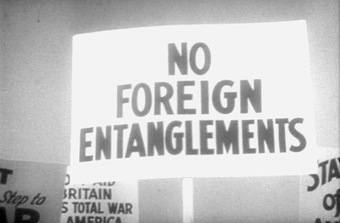 “No Foreign Entanglements”: Protest march to prevent American involvement in World War II before the attack on Pearl Harbor.

As 1940 became 1941, the actions of the Roosevelt administration made it more and more clear that the U.S. was on a course to war. This policy shift, driven by the President, came in two phases. The first came in 1939 with the passage of the Fourth Neutrality Act, which permitted the U.S. to trade arms with belligerent nations as long as these nations came to America to retrieve the arms and paid for them in cash. This policy was quickly dubbed “Cash and Carry. The second phase was the Lend-Lease Act of early 1941, which allowed the President “to lend, lease, sell, or barter arms, ammunition, food, or any ‘defense article’ or any ‘defense information’ to ‘the government of any country whose defense the President deems vital to the defense of the United States.'” American public opinion supported Roosevelt’s actions. As U.S. involvement in the Battle of the Atlantic grew with incidents such as the sinking of the USS Reuben James (DD-245), by late 1941 72% of Americans agreed that “the biggest job facing this country today is to help defeat the Nazi Government,” and 70% thought that defeating Germany was more important than staying out of the war.