The United Kingdom and Appeasement

31.2.3: The United Kingdom and Appeasement

Vivid memories of the horrors and deaths of the World War made Britain and its leaders strongly inclined to pacifism in the interwar era, exemplified by their policy of appeasement toward Nazi Germany, which led to the German annexation of Austria and parts of Czechoslovakia.

Explain why Prime Minister Chamberlain followed the policy of appeasement

Munich Agreement
A settlement permitting Nazi Germany’s annexation of portions of Czechoslovakia along the country’s borders mainly inhabited by German speakers, for which a new territorial designation “Sudetenland” was coined.
appeasement
A diplomatic policy of making political or material concessions to an enemy power in order to avoid conflict.
Anschluss
The Nazi propaganda term for the annexation of Austria into Nazi Germany in March 1938.

World War I was won by Britain and its allies at a terrible human and financial cost, creating a sentiment that wars should be avoided at all costs. The League of Nations was founded with the idea that nations could resolve their differences peacefully. As with many in Europe who had witnessed the horrors of the First World War and its aftermath, United Kingdom Prime Minister Neville Chamberlain was committed to peace. The theory was that dictatorships arose where peoples had grievances, and that by removing the source of these grievances, the dictatorship would become less aggressive. His attempts to deal with Nazi Germany through diplomatic channels and quell any sign of dissent from within, particularly from Churchill, were called by Chamberlain “the general policy of appeasement.”

Chamberlain’s policy of appeasement emerged from the failures of the League of Nations and of collective security. The League of Nations was set up in the aftermath of World War I in the hope that international cooperation and collective resistance to aggression might prevent another war. Members of the League were entitled to assist other members if they came under attack. The policy of collective security ran in parallel with measures to achieve international disarmament and where possible was based on economic sanctions against an aggressor. It appeared ineffectual when confronted by the aggression of dictators, notably Germany’s Remilitarization of the Rhineland and Italian leader Benito Mussolini’s invasion of Abyssinia.

The first European crisis of Chamberlain’s premiership was over the German annexation of Austria. The Nazi regime was already behind the assassination of Austrian Chancellor Engelbert Dollfuss in 1934 and was now pressuring Chancellor Kurt Schuschnigg. Informed of Germany’s objectives, Chamberlain’s government decided it was unable to stop these events and acquiesced to what later became known as the Anschluss of March 1938. Although the victorious Allies of World War I had prohibited the union of Austria and Germany, their reaction to the Anschluss was mild. Even the strongest voices against annexation, those of Fascist Italy, France, and Britain,  were not backed by force. In the House of Commons Chamberlain said that “The hard fact is that nothing could have arrested what has actually happened [in Austria] unless this country and other countries had been prepared to use force.” The American reaction was similar. The international reaction to the events of March 12, 1938 led Hitler to conclude that he could use even more aggressive tactics in his plan to expand the Third Reich. The Anschluss paved the way for Munich in September 1938 because it indicated the likely non-response of Britain and France to future German aggression. 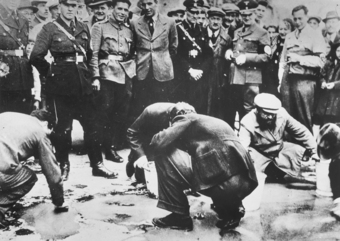 Anschluss: Immediately after the Anschluss, Vienna’s Jews were forced to wash pro-independence slogans from the city’s pavements.

The Sudetenland Crisis and the Munich Agreement

The second crisis came over the Sudetenland area of Czechoslovakia, home to a large ethnic German minority. Under the guise of seeking self-determination for the Sudeten Germans, Hitler planned to launch a war of aggression on October 1, 1938. In an effort to defuse the looming crisis, Chamberlain followed a strategy of pressuring Prague to make concessions to the ethnic Germans while warning Berlin about the dangers of war. The problems of the tight wire act were well-summarized by the Chancellor the Exchequer Sir John Simon in a diary entry during the May Crisis of 1938:

We are endeavoring at one & the same time, to restrain Germany by warning her that she must not assume we could remain neutral if she crossed the frontier; to stimulate Prague to make concessions; and to make sure that France will not take some rash action such as mobilization (when has mobilization been anything but a prelude to war?), under the delusion that we would join her in defense of Czechoslovakia. We won’t and can’t-but an open declaration to this effect would only give encouragement to Germany’s intransigence.

In a letter to his sister, Chamberlain wrote that he would contact Hitler to tell him “The best thing you [Hitler] can do is tell us exactly what you want for your Sudeten Germans. If it is reasonable we will urge the Czechs to accept and if they do, you must give assurances that you will let them alone in the future.”

Out of these attitudes grew what is known as the Munich Agreement, signed on September 30, 1938, a settlement permitting Nazi Germany’s annexation of portions of Czechoslovakia along the country’s borders mainly inhabited by German speakers. The purpose of the conference was to discuss the future of the Sudetenland in the face of ethnic demands made by Adolf Hitler. The agreement was signed by Germany, France, the United Kingdom, and Italy. Sudetenland was of immense strategic importance to Czechoslovakia, as most of its border defenses and banks were situated there along with heavy industrial districts. Because the state of Czechoslovakia was not invited to the conference, it considered itself betrayed and refers to this agreement as the “Munich Betrayal.”

Czechoslovakia was informed by Britain and France that it could either resist Nazi Germany alone or submit to the prescribed annexations. The Czechoslovak government, realizing the hopelessness of fighting the Nazis alone, reluctantly capitulated and agreed to abide by the agreement. The settlement gave Germany the Sudetenland starting October 10 and de facto control over the rest of Czechoslovakia as long as Hitler promised to go no further. On September 30 after some rest, Chamberlain went to Hitler and asked him to sign a peace treaty between the United Kingdom and Germany. After Hitler’s interpreter translated it for him, he happily agreed. 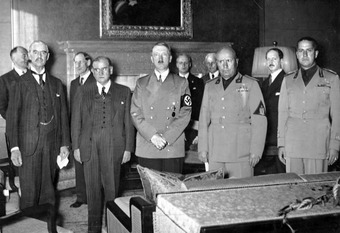 Munich Agreement: From left to right: Chamberlain, Daladier, Hitler, Mussolini, and Ciano pictured before signing the Munich Agreement, which gave the Sudetenland to Germany.