France at the End of the Interwar Period

During the interwar period, war-torn France collected reparations from Germany, in some cases through occupation, suffered social upheaval and the consequent rise of socialism, and promoted defensive foreign policies.

Describe the state of France prior to 1939

Maginot Line
A line of concrete fortifications, obstacles, and weapon installations that France constructed on the French side of its borders with Switzerland, Germany, and Luxembourg during the 1930s.
Treaty of Versailles
One of the peace treaties at the end of World War I, which required “Germany [to] accept the responsibility of Germany and her allies for causing all the loss and damage” during the war.
Weimar Republic
An unofficial designation for the German state between 1919 and 1933.
Popular Front
An alliance of left-wing movements during the interwar period, including the French Communist Party (PCF), the French Section of the Workers’ International (SFIO), and the Radical and Socialist Party.

Losses from WWI, Gains from the Treaty of Versailles

The war brought great losses of manpower and resources. Fought in large part on French soil, it led to approximately 1.4 million French dead including civilians, and four times as many wounded. Peace terms were imposed by the Big Four, meeting in Paris in 1919: David Lloyd George of Britain, Vittorio Orlando of Italy, Georges Clemenceau of France, and Woodrow Wilson of the United States. Clemenceau demanded the harshest terms and won most of them in the Treaty of Versailles in 1919. Germany was forced to admit its guilt for starting the war, and its military was permanently weakened. Germany also had to pay huge sums in war reparations to the Allies (who in turn had large loans from the U.S. to pay off).

France regained Alsace-Lorraine and occupied the German industrial Saar Basin, a coal and steel region. The German African colonies were put under League of Nations mandates to be administered by France and other victors. From the remains of the Ottoman Empire, France acquired the Mandate of Syria and the Mandate of Lebanon.

France was part of the Allied force that occupied the Rhineland following the Armistice. Foch supported Poland in the Greater Poland Uprising and in the Polish–Soviet War, and France also joined Spain during the Rif War. From 1925 until his death in 1932, Aristide Briand, as prime minister during five short intervals, directed French foreign policy, using his diplomatic skills and sense of timing to forge friendly relations with Weimar Germany as the basis of a genuine peace within the framework of the League of Nations. He realized France could neither contain the much larger Germany by itself nor secure effective support from Britain or the League.

As a response to the failure of the Weimar Republic to pay reparations in the aftermath of World War I, France occupied the industrial region of the Ruhr to ensure repayments from Germany. The intervention was a failure, and France accepted the American solution to the reparations issues expressed in the Dawes Plan and the Young Plan. 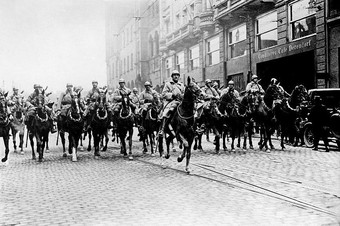 French Enter Essen: French cavalry entering Essen during the Occupation of the Ruhr.

In the 1920s, France established an elaborate system of border defenses called the Maginot Line, designed to fight off any German attack. (Unfortunately, the Maginot Line did not extend into Belgium, where Germany attacked in 1940.) Military alliances were signed with weak powers in 1920–21, called the “Little Entente.”

The worldwide financial crisis affected France a bit later than other countries, hitting around 1931. While the GDP in the 1920s grew at the very strong rate of 4.43% per year, the 1930s rate fell to only 0.63%. The depression was relatively mild: unemployment peaked under 5% and the fall in production was at most 20% below the 1929 output; there was no banking crisis.

In contrast to the mild economic upheaval, though, the political upheaval was enormous. After 1931, rising unemployment and political unrest led to the February 6, 1934, riots. Socialist Leon Blum, leading the Popular Front, brought together Socialists and Radicals to become Prime Minister from 1936 to 1937; he was the first Jew and the first Socialist to lead France. The Communists in the Chamber of Deputies (parliament) voted to keep the government in power and generally supported its economic policies, but rejected its foreign policies. The Popular Front passed numerous labor reforms, which increased wages, cut working hours to 40 hours with overtime illegal, and provided many lesser benefits to the working class, such as mandatory two-week paid vacations. However, renewed inflation canceled the gains in wage rates, unemployment did not fall, and economic recovery was very slow. Historians agree that the Popular Front was a failure in terms of economics, foreign policy, and long-term stability. At first the Popular Front created enormous excitement and expectations on the left—including large-scale sitdown strikes—but in the end it failed to live up to its promise. In the long run, however, later Socialists took inspiration from the attempts of the Popular Front to set up a welfare state.

The government joined Britain in establishing an arms embargo during the Spanish Civil War (1936–39). Blum rejected support for the Spanish Republicans because of his fear that civil war might spread to deeply divided France. Financial support in military cooperation with Poland was also a policy. The government nationalized arms suppliers and dramatically increased its program of rearming the French military in a last-minute catch up with the Germans.

Appeasement of Germany in cooperation with Britain was the policy after 1936, as France sought peace even in the face of Hitler’s escalating demands. Édouard Daladier refused to go to war against Germany and Italy without British support as Neville Chamberlain wanted to save peace at Munich in 1938.