During Stalin’s totalitarian rule of the Soviet Union, he transformed the state through aggressive economic planning, the development of a cult of personality around himself, and the violent repression of so-called “enemies of the working class,” overseeing the murder of millions of Soviet citizens.

Analyze the political atmosphere of the Soviet Union

Bolsheviks
The founding and ruling political party of the Union of Soviet Socialist Republics, a communist party organized on the basis of democratic centralism.
Joseph Stalin
The leader and effective dictator of the Soviet Union from the mid-1920s until his death in 1953.
First Five-Year Plan
A list of economic goals created by General Secretary Joseph Stalin and based on his policy of Socialism in One Country, implemented between 1928 and 1932, that focused on the forced collectivization of agriculture.

The Rise of Stalin

From its creation, the government in the Soviet Union was based on the one-party rule of the Communist Party (Bolsheviks). The stated purpose of the one-party state was to ensure that capitalist exploitation would not return to the Soviet Union and that the principles of democratic centralism would be effective in representing the people’s will in a practical manner. Debate over the future of the economy provided the background for a power struggle in the years after Lenin’s death in 1924. Initially, Lenin was to be replaced by a “troika” (“collective leadership”) consisting of Grigory Zinoviev of the Ukrainian SSR, Lev Kamenev of the Russian SFSR, and Joseph Stalin of the Transcaucasian SFSR.

On April 3, 1922, Stalin was named the General Secretary of the Communist Party of the Soviet Union. Lenin had appointed Stalin the head of the Workers’ and Peasants’ Inspectorate, which gave Stalin considerable power. By gradually consolidating his influence and isolating and outmaneuvering his rivals within the party, Stalin became the undisputed leader of the Soviet Union and by the end of the 1920s had established totalitarian rule. In October 1927, Grigory Zinoviev and Leon Trotsky were expelled from the Central Committee and forced into exile.

In 1928, Stalin introduced the First Five-Year Plan for building a socialist economy. In place of the internationalism expressed by Lenin throughout the Revolution, it aimed to build Socialism in One Country. In industry, the state assumed control over all existing enterprises and undertook an intensive program of industrialization. In agriculture, rather than adhering to the “lead by example” policy advocated by Lenin, forced collectivization of farms was implemented all over the country. This was intended to increase agricultural output from large-scale mechanized farms, bring the peasantry under more direct political control, and make tax collection more efficient. Collectivization brought social change on a scale not seen since the abolition of serfdom in 1861 and alienation from control of the land and its produce. Collectivization also meant a drastic drop in living standards for many peasants, leading to violent reactions.

From collectivization, famines ensued, causing millions of deaths; surviving kulaks were persecuted and many sent to Gulags to do forced labour. Social upheaval continued in the mid-1930s. Stalin’s Great Purge resulted in the execution or detainment of many “Old Bolsheviks” who had participated in the October Revolution with Lenin. During the Great Purge, Lenin undertook a massive campaign of repression of the party, government, armed forces, and intelligentsia, in which millions of so-called “enemies of the working class” were imprisoned, exiled, or executed, often without due process. Major figures in the Communist Party and government, and many Red Army high commanders, were killed after being convicted of treason in show trials. According to declassified Soviet archives, in 1937 and 1938, the NKVD arrested more than 1.5 million people, of whom 681,692 were shot. Over those two years, that averages to over 1,000 executions a day. According to historian Geoffrey Hosking, “…excess deaths during the 1930s as a whole were in the range of 10–11 million.” 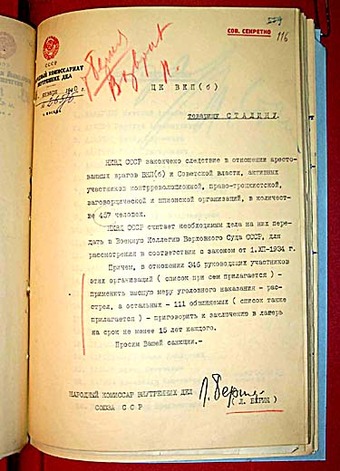 Letter to Stalin: Lavrentiy Beria’s January 1940 letter to Stalin asking permission to execute 346 “enemies of the CPSU and of the Soviet authorities” who conducted “counter-revolutionary, right-Trotskyite plotting and spying activities.”

Cults of personality developed in the Soviet Union around both Stalin and Lenin. Numerous towns, villages and cities were renamed after the Soviet leader and the Stalin Prize and Stalin Peace Prize were named in his honor. He accepted grandiloquent titles (e.g., “Coryphaeus of Science,” “Father of Nations,” “Brilliant Genius of Humanity,” “Great Architect of Communism,” “Gardener of Human Happiness,” and others), and helped rewrite Soviet history to provide himself a more significant role in the revolution of 1917. At the same time, according to Nikita Khrushchev, he insisted that he be remembered for “the extraordinary modesty characteristic of truly great people.” Although statues of Stalin depict him at a height and build approximating the very tall Tsar Alexander III, sources suggest he was approximately 5 feet 4 inches. 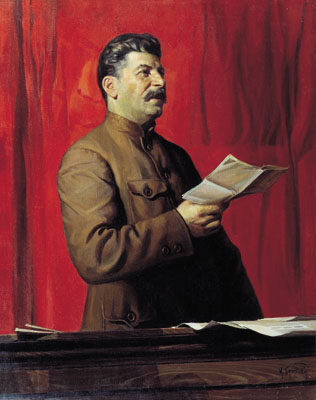 Portrait of Stalin: Stalin depicted in the style of Socialist Realism. Painting by Isaak Brodsky.

The early 1930s saw closer cooperation between the West and the USSR. From 1932 to 1934, the Soviet Union participated in the World Disarmament Conference. In 1933, diplomatic relations between the United States and the USSR were established when in November, newly elected President of the United States Franklin D. Roosevelt chose to formally recognize Stalin’s Communist government and negotiated a new trade agreement between the two nations. In September 1934, the Soviet Union joined the League of Nations. After the Spanish Civil War broke out in 1936, the USSR actively supported the Republican forces against the Nationalists, who were supported by Fascist Italy and Nazi Germany.

In December 1936, Stalin unveiled a new Soviet Constitution. This document was seen as a personal triumph for Stalin, who on this occasion was described by Pravda as a “genius of the new world, the wisest man of the epoch, the great leader of communism.” By contrast, Western historians and historians from former Soviet occupied countries have viewed the constitution as a meaningless propaganda document.

The late 1930s saw a shift towards the Axis powers. In 1939, almost a year after the United Kingdom and France concluded the Munich Agreement with Germany, the USSR dealt with the Nazis both militarily and economically during extensive talks. The two countries concluded the German–Soviet Nonaggression Pact and the German–Soviet Commercial Agreement in August 1939. The nonaggression pact made possible Soviet occupation of Lithuania, Latvia, Estonia, Bessarabia, northern Bukovina, and eastern Poland. In late November of the same year, unable to coerce the Republic of Finland by diplomatic means into moving its border 16 miles back from Leningrad, Joseph Stalin ordered the invasion of Finland.