Pre-WWII Japan was characterized by political totalitarianism, ultranationalism, expansionism, and fascism culminating in Japan’s invasion of China in 1937.

Identify Japanese actions taken in the interest of territorial expansion

Tripartite Pact
An agreement between Germany, Japan, and Italy signed in Berlin on September 27, 1940 that created the alliance known as the Axis Powers of WWII.
Manchurian Incident
A staged event engineered by Japanese military personnel as a pretext for the Japanese invasion in 1931 of northeastern China, known as Manchuria.
Nanking Massacre
An episode of mass murder and rape committed by Japanese troops against the residents of Nanking.

The Shōwa period is the era of Japanese history corresponding to the reign of the Shōwa Emperor, Hirohito, from December 25, 1926, through January 7, 1989. The Shōwa period was longer than the reign of any previous Japanese emperor. During the pre-1945 period, Japan moved into political totalitarianism, ultranationalism, and fascism, as well as a series of expansionist wars culminating in Japan’s invasion of China in 1937. This was part of an overall global period of social upheavals and conflicts such as the Great Depression and the Second World War.

Prior to 1868, most Japanese more readily identified with their feudal domain rather than the idea of “Japan” as a whole. But with the introduction of mass education, conscription, industrialization, centralization, and successful foreign wars, Japanese nationalism became a powerful force in society. Mass education and conscription served as a means to indoctrinate the coming generation with “the idea of Japan” as a nation instead of a series of Daimyo (domains), supplanting loyalty to feudal domains with loyalty to the state. Industrialization and centralization gave the Japanese a strong sense that their country could rival Western powers technologically and socially. Moreover, successful foreign wars gave the populace a sense of martial pride in their nation.

The rise of Japanese nationalism paralleled the growth of nationalism within the West. Certain conservatives such as Gondō Seikei and Asahi Heigo saw the rapid industrialization of Japan as something that had to be tempered. It seemed, for a time, that Japan was becoming too “Westernized” and that if left unimpeded, something intrinsically Japanese would be lost. During the Meiji period, such nationalists railed against the unequal treaties, but in the years following the First World War, Western criticism of Japanese imperial ambitions and restrictions on Japanese immigration changed the focus of the nationalist movement in Japan.

During the first part of the Shōwa era, racial discrimination against other Asians was habitual in Imperial Japan, starting with Japanese colonialism. The Shōwa regime preached racial superiority and racialist theories based on the sacred nature of the Yamato-damashii.

Left-wing groups were subject to violent suppression by the end of the Taishō period, and radical right-wing groups, inspired by fascism and Japanese nationalism, rapidly grew in popularity. The extreme right became influential throughout the Japanese government and society, notably within the Kwantung Army, a Japanese army stationed in China along the Japanese-owned South Manchuria Railroad. During the Manchurian Incident of 1931, radical army officers bombed a small portion of the South Manchuria Railroad and, falsely attributing the attack to the Chinese, invaded Manchuria. The Kwantung Army conquered Manchuria and set up the puppet government of Manchukuo there without permission from the Japanese government. International criticism of Japan following the invasion led to Japan withdrawing from the League of Nations.

Prime Minister Tsuyoshi Inukai of the Seiyūkai Party attempted to restrain the Kwantung Army and was assassinated in 1932 by right-wing extremists. Because of growing opposition within the Japanese military and the extreme right to party politicians, who they saw as corrupt and self-serving, Inukai was the last party politician to govern Japan in the pre-World War II era. In February 1936 young radical officers of the Japanese Army attempted a coup d’état, assassinating many moderate politicians before the coup was suppressed. In its wake, the Japanese military consolidated its control over the political system and most political parties were abolished when the Imperial Rule Assistance Association was founded in 1940.

Japan’s expansionist vision grew increasingly bold. Many of Japan’s political elite aspired to have the country acquire new territory for resource extraction and settlement of surplus population. These ambitions led to the outbreak of the Second Sino-Japanese War in 1937. After their victory in the Chinese capital, the Japanese military committed the infamous Nanking Massacre, also known as the Rape of Nanking, which involved a massive number of civilian deaths including infants and elderly and the large-scale rape of Chinese women. The exact number of casualties is an issue of fierce debate between Chinese and Japanese historians; estimates range from 40,000 to 300,000 people. 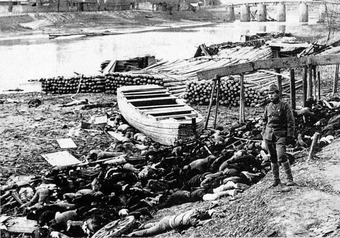 Rape of Nanking: The corpses of massacred victims from the Nanking Massacre on the shore of the Qinhuai River with a Japanese soldier standing nearby.

The Japanese military failed to defeat the Chinese government led by Chiang Kai-shek and the war descended into a bloody stalemate that lasted until 1945. Japan’s stated war aim was to establish the Greater East Asia Co-Prosperity Sphere, a vast pan-Asian union under Japanese domination. Hirohito’s role in Japan’s foreign wars remains a subject of controversy, with various historians portraying him as either a powerless figurehead or an enabler and supporter of Japanese militarism.

The United States opposed Japan’s invasion of China and responded with increasingly stringent economic sanctions intended to deprive Japan of the resources to continue its war in China. Japan reacted by forging an alliance with Germany and Italy in 1940, known as the Tripartite Pact, which worsened its relations with the U.S. In July 1941, the U.S., Great Britain, and the Netherlands froze all Japanese assets when Japan completed its invasion of French Indochina by occupying the southern half of the country, further increasing tension in the Pacific.