Racism, especially antisemitism, was a central feature of the Nazi regime, based on a pseudo-scientific doctrine asserting the superiority of the Aryan “master race.”

“master race”
A pseudo-scientific concept in Nazi ideology in which the Nordic or Aryan races, thought to predominate among Germans and other northern European peoples, were deemed the highest in an assumed racial hierarchy.
stab-in-the-back legend
The notion, widely believed in right-wing circles in Germany after 1918, that the German Army did not lose World War I on the battlefield but was instead betrayed by the civilians on the home front, especially the republicans who overthrew the monarchy in the German Revolution of 1918-19. Advocates denounced the German government leaders who signed the Armistice on November 11, 1918, as the “November Criminals.”
Kristallnacht
A pogrom against Jews throughout Nazi Germany on November 9-10, 1938, carried out by SA paramilitary forces and German civilians. German authorities looked on without intervening. The name comes from the shards of broken glass that littered the streets after the windows of Jewish-owned stores, buildings, and synagogues were smashed.
Nuremberg Laws
Antisemitic laws in Nazi Germany introduced on September 15, 1935, by the Reichstag at a special meeting convened at the annual Nuremberg Rally of the Nazi Party (NSDAP). The two laws were the Law for the Protection of German Blood and German Honour, which forbade marriages and extramarital intercourse between Jews and Germans and the employment of German females under 45 in Jewish households, and the Reich Citizenship Law, which declared that only those of German or related blood were eligible to be Reich citizens; the remainder were classed as state subjects without citizenship rights.

Racism and antisemitism were basic tenets of the NSDAP and the Nazi regime. The Germanic peoples (the Nordic race) were considered by the Nazis to be the purest branch of the Aryan race and therefore viewed as the master race. The Nazis postulated the existence of a racial conflict between the Aryan master race and inferior races, particularly Jews, who were viewed as a mixed race that had infiltrated society and were responsible for the exploitation and repression of the Aryan race.

Nazi policies placed centuries-long residents in German territory who were not ethnic Germans such as Jews (a Semitic people of Levantine origins), Romanis (also known as Gypsies, an Indo-Aryan people of Indian Subcontinent origins), European non-Nordic peoples including Slavs (Poles, Serbs, Russians, etc.), and all other persons of color as inferior non-Aryan subhumans (i.e. non-Nordics, under the Nazi misinterpretation of the term “Aryan”) in a racial hierarchy with the Herrenvolk (“master race”) of the Volksgemeinschaft (“people’s community”) at the top. Jews were at the bottom, considered inhuman and thus unworthy of life.

Using the “stab-in-the-back legend,” the Nazis blamed poverty, hyperinflation in the Weimar Republic, unemployment, and the loss of World War I and surrender by the “November Criminals” all on the Jews and “cultural Bolsheviks,” the latter considered in conspiracy with the Jews. German woes were attributed to the effects of the Treaty of Versailles, also considered a Jewish conspiracy. The Nazi Party used these populist antisemitic views to gain votes.

Discrimination against Jews began immediately after the Nazi seizure of power. Following a month-long series of attacks by members of the SA (Nazi paramilitary) on Jewish businesses, synagogues, and members of the legal profession, on April 1, 1933, Hitler declared a national boycott of Jewish businesses. The Law for the Restoration of the Professional Civil Service, passed on April 7, forced all non-Aryan civil servants to retire from the legal profession and civil service. Similar legislation soon deprived Jewish members of other professions of their right to practice. On April 11, a decree was promulgated that stated anyone with even one Jewish parent or grandparent was considered non-Aryan. As part of the drive to remove Jewish influence from cultural life, members of the National Socialist Student League removed from libraries books considered un-German, and a nationwide book burning was held on May 10.

Violence and economic pressure were used by the regime to encourage Jews to voluntarily leave the country. Jewish businesses were denied access to markets, forbidden to advertise in newspapers, and deprived of access to government contracts. Citizens were harassed and subjected to violent attacks. Many towns posted signs forbidding entry to Jews.

In November 1938, a young Jewish man requested an interview with the German ambassador in Paris. He met with a legation secretary, whom he shot and killed to protest his family’s treatment in Germany. This incident provided the pretext for a pogrom the NSDAP incited against the Jews on November 9, 1938. Members of the SA damaged or destroyed synagogues and Jewish property throughout Germany. At least 91 German Jews were killed during this pogrom, later called Kristallnacht, the “Night of Broken Glass.” Further restrictions were imposed on Jews in the coming months. They were forbidden to own businesses or work in retail shops, drive cars, go to the cinema, visit the library, or own weapons. Jewish pupils were removed from schools. The Jewish community was fined one billion marks to pay for the damage caused by Kristallnacht and told that any money received via insurance claims would be confiscated.

By 1939, around 250,000 of Germany’s 437,000 Jews emigrated to the United States, Argentina, Great Britain, Palestine, and other countries. Many chose to stay in continental Europe. Nonetheless, emigration was problematic, as Jews were required to remit up to 90 percent of their wealth as a tax upon leaving the country. By 1938 it was almost impossible for potential Jewish emigrants to find a country willing to take them. Mass deportation schemes such as the Madagascar Plan proved to be impossible for the Nazis to carry out, and starting in mid-1941, the German government started mass exterminations of the Jews of Europe. 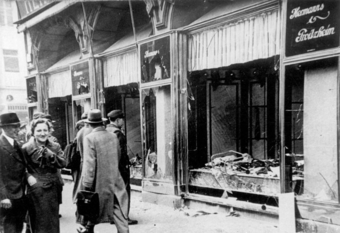 Kristallnacht: Damage caused during Kristallnacht. On November 9-10, 1938, a pogrom against Jews was carried out by SA paramilitary forces and German civilians throughout Nazi Germany.

The Nuremberg Laws were introduced on September 15, 1935, by the Reichstag at a special meeting convened at the annual Nuremberg Rally of the Nazi Party. The two laws were the Law for the Protection of German Blood and German Honour, which forbade marriages and extramarital intercourse between Jews and Germans (seen as “race disgrace”) and the employment of German females under 45 in Jewish households, and the Reich Citizenship Law, which declared that only those of German or related blood were eligible to be Reich citizens; the remainder were classed as state subjects without citizenship rights. A supplementary decree outlining the definition of who was Jewish was passed on November 14, and the Reich Citizenship Law officially came into force on that date. The laws were expanded on November 26, 1935, to include Romani people and Afro-Germans. This supplementary decree defined Gypsies as “enemies of the race-based state,” the same category as Jews.

The Nuremberg laws had a crippling economic and social impact on the Jewish community. Persons convicted of violating the marriage laws were imprisoned, and (subsequent to March 8, 1938) upon completing their sentences were rearrested by the Gestapo and sent to Nazi concentration camps. Non-Jews gradually stopped socializing with Jews or shopping in Jewish-owned stores, many of which closed due to lack of customers. As Jews were no longer permitted to work in the civil service or government-regulated professions such as medicine and education, many middle-class business owners and professionals were forced to take menial employment.