In 1933, the Nazi Party became the largest elected party in the German Reichstag, Hitler was appointed Chancellor, and the Reichstag passed the Enabling Act. This began the transformation of the Weimar Republic into Nazi Germany, a one-party dictatorship based on the totalitarian and autocratic ideology of National Socialism.

Describe the events that led to Hitler becoming chancellor

Enabling Act
A 1933 Weimar Constitution amendment that gave the German Cabinet – in effect, Chancellor Adolf Hitler – the power to enact laws without the involvement of the Reichstag. It passed in both the Reichstag and Reichsrat on March 24, 1933, and was signed by President Paul von Hindenburg later that day.
Night of the Long Knives
A purge that took place in Nazi Germany from June 30 to July 2, 1934, when the Nazi regime carried out a series of political extrajudicial executions intended to consolidate Hitler’s absolute hold on power in Germany. Many of those killed were leaders of the SA (Sturmabteilung), the Nazis’ own paramilitary Brownshirts organization; the best-known victim was Ernst Röhm, the SA’s leader and one of Hitler’s longtime supporters and allies.
Reichstag Fire Decree
This decree was issued by German President Paul von Hindenburg on the advice of Chancellor Adolf Hitler in direct response to the Reichstag fire of February 27, 1933. The decree nullified many of the key civil liberties of German citizens. With Nazis in powerful positions in the German government, the decree was used as the legal basis for the imprisonment of anyone considered an opponent of the Nazis and to suppress publications not considered “friendly” to the Nazi cause. The decree is considered by historians to be one of the key steps in the establishment of a one-party Nazi state in Germany.

The Great Depression provided a political opportunity for Hitler. Germans were ambivalent about the parliamentary republic, which faced challenges from right- and left-wing extremists. The moderate political parties were increasingly unable to stem the tide of extremism, and the German referendum of 1929, which almost passed a law formally renouncing the Treaty of Versailles and making it a criminal offence for German officials to cooperate in the collecting of reparations, helped to elevate Nazi ideology. The elections of September 1930 resulted in the break-up of a grand coalition and its replacement with a minority cabinet. Its leader, chancellor Heinrich Brüning of the Centre Party, governed through emergency decrees from President Paul von Hindenburg. Governance by decree became the new norm and paved the way for authoritarian forms of government. The Nazi Party (NSDAP) rose from obscurity to win 18.3 percent of the vote and 107 parliamentary seats in the 1930 election, becoming the second-largest party in parliament.

Brüning’s austerity measures brought little economic improvement and were extremely unpopular. Hitler exploited this by targeting his political messages specifically at people who had been affected by the inflation of the 1920s and the Depression, such as farmers, war veterans, and the middle class.

Hitler ran against Hindenburg in the 1932 presidential elections. A January 1932 speech to the Industry Club in Düsseldorf won him support from many of Germany’s most powerful industrialists. Hindenburg had support from various nationalist, monarchist, Catholic, and republican parties, as well as some social democrats. Hitler used the campaign slogan “Hitler über Deutschland” (“Hitler over Germany”), a reference to his political ambitions and campaigning by aircraft. He was one of the first politicians to use aircraft travel for political purposes and utilized it effectively. Hitler came in second in both rounds of the election, garnering more than 35 percent of the vote in the final election. Although he lost to Hindenburg, this election established Hitler as a strong force in German politics.

The absence of an effective government prompted two influential politicians, Franz von Papen and Alfred Hugenberg, along with several industrialists and businessmen, to write a letter to Hindenburg. The signers urged Hindenburg to appoint Hitler as leader of a government “independent from parliamentary parties,” which could turn into a movement that would “enrapture millions of people.”

Hindenburg reluctantly agreed to appoint Hitler as chancellor after two further parliamentary elections—in July and November 1932—did not result in the formation of a majority government. Hitler headed a short-lived coalition government formed by the NSDAP and Hugenberg’s party, the German National People’s Party (DNVP). On January 30, 1933, the new cabinet was sworn in during a brief ceremony in Hindenburg’s office. The NSDAP gained three posts: Hitler was named chancellor, Wilhelm Frick Minister of the Interior, and Hermann Göring Minister of the Interior for Prussia. Hitler had insisted on the ministerial positions to gain control over the police in much of Germany. 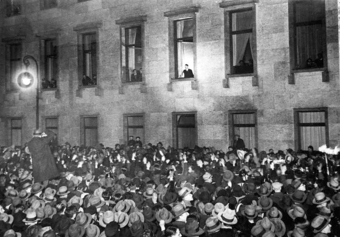 Hitler, Chancellor of Germany: Hitler, at the window of the Reich Chancellery, receives an ovation on the evening of his inauguration as chancellor, January 30, 1933.

As chancellor, Hitler worked against attempts by the NSDAP’s opponents to build a majority government. Because of the political stalemate, he asked Hindenburg to again dissolve the Reichstag, and elections were scheduled for early March. On February 27, 1933, the Reichstag building was set on fire. Göring blamed a communist plot, because Dutch communist Marinus van der Lubbe was found in incriminating circumstances inside the burning building. According to the British historian Sir Ian Kershaw, the consensus of nearly all historians is that van der Lubbe actually set the fire. Others, including William L. Shirer and Alan Bullock, are of the opinion that the NSDAP itself was responsible. At Hitler’s urging, Hindenburg responded with the Reichstag Fire Decree of 28 February, which suspended basic rights and allowed detention without trial. The decree was permitted under Article 48 of the Weimar Constitution, which gave the president the power to take emergency measures to protect public safety and order. Activities of the German Communist Party (KPD) were suppressed, and some 4,000 KPD members were arrested.

In addition to political campaigning, the NSDAP engaged in paramilitary violence and the spread of anti-communist propaganda in the days preceding the election. On election day, March 6, 1933, the NSDAP’s share of the vote increased to 43.9 percent, and the party acquired the largest number of seats in parliament. Hitler’s party failed to secure an absolute majority, necessitating another coalition with the DNVP.

To achieve full political control despite not having an absolute majority in parliament, Hitler’s government brought the Enabling Act to a vote in the newly elected Reichstag. The Act—officially titled the Gesetz zur Behebung der Not von Volk und Reich (“Law to Remedy the Distress of People and Reich”)—gave Hitler’s cabinet the power to enact laws without the consent of the Reichstag for four years. These laws could (with certain exceptions) deviate from the constitution. Since it would affect the constitution, the Enabling Act required a two-thirds majority to pass. Leaving nothing to chance, the Nazis used the provisions of the Reichstag Fire Decree to arrest all 81 Communist deputies (in spite of their virulent campaign against the party, the Nazis allowed the KPD to contest the election) and prevent several Social Democrats from attending.

On March 23, 1933, the Reichstag assembled at the Kroll Opera House under turbulent circumstances. Ranks of SA (Nazi paramilitary) men served as guards inside the building, while large groups outside opposing the proposed legislation shouted slogans and threats toward the arriving members of parliament. The position of the Centre Party, the third largest party in the Reichstag, was decisive. After Hitler verbally promised party leader Ludwig Kaas that Hindenburg would retain his power of veto, Kaas announced the Centre Party would support the Enabling Act. The Act passed by a vote of 441–84, with all parties except the Social Democrats voting in favor. The Enabling Act, along with the Reichstag Fire Decree, transformed Hitler’s government into a de facto legal dictatorship.

Having achieved full control over the legislative and executive branches of government, Hitler and his allies began to suppress the remaining opposition. The Social Democratic Party was banned and its assets seized. While many trade union delegates were in Berlin for May Day activities, SA stormtroopers demolished union offices around the country. On May 2, 1933, all trade unions were forced to dissolve and their leaders were arrested. Some were sent to concentration camps.

By the end of June, the other parties had been intimidated into disbanding. This included the Nazis’ nominal coalition partner, the DNVP; with the SA’s help, Hitler forced its leader, Hugenberg, to resign on June 29. On July 14, the NSDAP was declared the only legal political party in Germany. The demands of the SA for more political and military power caused anxiety among military, industrial, and political leaders. In response, Hitler purged the entire SA leadership in the Night of the Long Knives, which took place from June 30 to July 2, 1934. Hitler targeted Ernst Röhm and other SA leaders who, along with a number of Hitler’s political adversaries (such as Gregor Strasser and former chancellor Kurt von Schleicher), were rounded up, arrested, and shot. While the international community and some Germans were shocked by the murders, many in Germany believed Hitler was restoring order.

On August 2, 1934, Hindenburg died. The previous day, the cabinet had enacted the “Law Concerning the Highest State Office of the Reich.” This law stated that upon Hindenburg’s death, the office of president would be abolished and its powers merged with those of the chancellor. Hitler thus became head of state as well as head of government and was formally named as Führer und Reichskanzler (leader and chancellor). With this action, Hitler eliminated the last legal avenue by which he could be removed from office.

As head of state, Hitler became supreme commander of the armed forces. The traditional loyalty oath of servicemen was altered to affirm loyalty to Hitler personally, by name, rather than to the office of supreme commander or the state. On August 19, the merger of the presidency with the chancellorship was approved by 90 percent of the electorate voting in a plebiscite.

In early 1938, Hitler used blackmail to consolidate his hold over the military by instigating the Blomberg-Fritsch Affair. Hitler forced his War Minister, Field Marshal Werner von Blomberg, to resign by using a police dossier that showed that Blomberg’s new wife had a record for prostitution. Army commander Colonel-General Werner von Fritsch was removed after the Schutzstaffel (SS paramilitary) produced allegations that he had engaged in a homosexual relationship. Both men fell into disfavor because they objected to Hitler’s demand to make the Wehrmacht (German armed forces) ready for war as early as 1938. Hitler assumed Blomberg’s title of Commander-in-Chief, thus taking personal command of the armed forces. On the same day, sixteen generals were stripped of their commands and 44 more were transferred; all were suspected of not being sufficiently pro-Nazi. By early February 1938, 12 more generals had been removed.

Hitler took care to give his dictatorship the appearance of legality. Many of his decrees were explicitly based on the Reichstag Fire Decree and hence on Article 48 of the Weimar Constitution. The Reichstag renewed the Enabling Act twice, each time for a four-year period. While elections to the Reichstag were still held (in 1933, 1936, and 1938), voters were presented with a single list of Nazis and pro-Nazi “guests” which carried with well over 90 percent of the vote. These elections were held in far-from-secret conditions; the Nazis threatened severe reprisals against anyone who didn’t vote or dared to vote no.