The Nazi Party, which rose to prominence in Germany in the late 1920s and early 1930s, was a right-wing political party that sought to improve the stock of the Germanic people through racial purity and eugenics, broad social welfare programs, and a collective subordination of individual rights, sacrificed for the good of the state and the “Aryan master race.”

Analyze the reasons for the success of the Nazi Party

Aryan
A racial grouping term used in the period of the late 19th century to the mid-20th century to describe multiple peoples. It has been variously used to describe all Indo-Europeans in general (spanning from India to Europe), the original Aryan people specifically in Persia, and most controversially through Nazi misinterpretation, the Nordic or Germanic peoples. The term derives from the Aryan people from Persia, who spoke a language similar to those found in Europe.
Hitler Youth
The youth organization of the Nazi Party in Germany, which originated in 1922. From 1933 until 1945, it was the sole official youth organization in Germany and was partially a paramilitary organization.
eugenics
A set of beliefs and practices that aims at improving the genetic quality of the human population.
Nuremberg Rally
The annual rally of the Nazi Party in Germany, held from 1923 to 1938. They were large Nazi propaganda events, especially after Hitler’s rise to power in 1933.

The National Socialist German Workers’ Party (German: Nationalsozialistische Deutsche Arbeiterpartei, abbreviated NSDAP), commonly referred to in English as the Nazi Party, was a political party in Germany that was active between 1920 and 1945 and practiced the ideology of Nazism. Its precursor, the German Workers’ Party (Deutsche Arbeiterpartei; DAP), existed from 1919 to 1920.

The party emerged from the German nationalist, racist, and populist paramilitary culture, which fought against the communist uprisings in post-World War I Germany. The party was created to draw workers away from communism and into populist (German: völkisch) nationalism. Initially, Nazi political strategy focused on anti-big business, anti-bourgeois, and anti-capitalist rhetoric, although such aspects were later downplayed to gain the support of industrial entities. In the 1930s the party’s focus shifted to anti-Semitic and anti-Marxist themes.

Pseudo-scientific racism theories were central to Nazism. The Nazis propagated the idea of a “people’s community.” Their aim was to unite “racially desirable” Germans as national comrades, while excluding those deemed either to be political dissidents, physically or intellectually inferior, or of a foreign race. The Nazis sought to improve the stock of the Germanic people through racial purity and eugenics, broad social welfare programs, and a collective subordination of individual rights, sacrificed for the good of the state and the “Aryan master race.” To maintain the supposed purity and strength of the Aryan race, the Nazis sought to exterminate Jews, Romani, and the physically and mentally handicapped. They imposed exclusionary segregation on homosexuals, Africans, Jehovah’s Witnesses, and political opponents. The persecution reached its climax when the party-controlled German state organized the systematic murder of approximately six million Jews and five million people from the other targeted groups in what has become known as the Holocaust.

The party’s leader since 1921, Adolf Hitler, was appointed Chancellor of Germany by President Paul von Hindenburg on January 30, 1933. Hitler rapidly established a totalitarian regime known as the Third Reich. Following the defeat of the Third Reich at the conclusion of World War II in Europe, the party was “declared to be illegal” by the Allied powers, who carried out denazification in the years after the war.

The party grew out of smaller political groups with nationalist orientation that formed in the last years of World War I. In 1918, a league called the Freien Arbeiterausschuss für einen guten Frieden (Free Workers’ Committee for a good Peace) was created in Bremen, Germany. On March 7, 1918, Anton Drexler, an avid German nationalist, formed a branch of this league in Munich. Drexler was a local locksmith who had been a member of the militarist Fatherland Party during World War I and was bitterly opposed to the armistice of November 1918 and the revolutionary upheavals that followed. Drexler followed the typical views of militant nationalists of the day, such as opposing the Treaty of Versailles, having antisemitic, anti-monarchist and anti-Marxist views, and believing in the superiority of Germans, whom nationalists claimed to be part of the Aryan “master race.” He also accused international capitalism of being a Jewish-dominated movement and denounced capitalists for war profiteering in World War I. Drexler saw the situation of political violence and instability in Germany as the result of the new Weimar Republic being out-of-touch with the masses, especially the lower classes.

Though very small, Drexler’s movement did receive attention and support from some influential figures. Supporter Dietrich Eckhart brought military figure Count Felix Graf von Bothmer, a prominent supporter of the concept of “national socialism,” to address the movement. On January 5, 1919, Drexler created a new political party, the German Workers’ Party (Deutsche Arbeiterpartei, DAP). To ease concerns among potential middle-class supporters, Drexler made clear that unlike Marxists, the party supported the middle-class, and that the party’s socialist policy was meant to give social welfare to German citizens deemed part of the Aryan race. The DAP was a comparatively small group with fewer than 60 members. Nevertheless, it attracted the attention of the German authorities, who were suspicious of any organization that appeared to have subversive tendencies.

Adolf Hitler joined the DAP in 1919 and quickly became the party’s most active orator, appearing in public as a speaker 31 times within the first year. Hitler’s considerable oratory and propaganda skills were appreciated by the party leadership as crowds began to flock to hear his speeches.

To increase its appeal to larger segments of the population, on February 24, 1920, the same day as the biggest Hitler’s speech to date, the DAP changed its name to the Nationalsozialistische Deutsche Arbeiterpartei (National Socialist German Workers Party). That year, the Nazi Party officially announced that only persons of “pure Aryan descent” could become party members; if the person had a spouse, the spouse also had to be a “racially pure” Aryan. Party members could not be related either directly or indirectly to a so-called “non-Aryan.”

The SA (“storm troopers”, also known as “Brownshirts”) were founded as a party militia in 1921 and began violent attacks on other parties.

During 1921 and 1922, the Nazi Party grew significantly, partly through Hitler’s oratorical skills, partly through the SA’s appeal to unemployed young men, and partly because there was a backlash against socialist and liberal politics in Bavaria as Germany’s economic problems deepened and the weakness of the Weimar regime became apparent. The party recruited former World War I soldiers, to whom Hitler as a decorated frontline veteran particularly appealed, as well as small businessmen and disaffected former members of rival parties. Nazi rallies were often held in beer halls, where downtrodden men could get free beer. The Hitler Youth was formed for the children of party members, although it remained small until the late 1920s.

After a failed coup (Beer Hall Putsch) in 1923, Hitler was arrested and the Nazi Party was largely disbanded.

Adolf Hitler was released from prison on December 20, 1924. In the following year he re-founded and reorganized the Nazi Party with himself as its undisputed leader. The new Nazi Party was no longer a paramilitary organization and disavowed any intention of taking power by force. In any case, the economic and political situation had stabilized and the extremist upsurge of 1923 had faded, so there was no prospect of further revolutionary adventures.

In the 1920s the Nazi Party expanded beyond its Bavarian base. The areas of strongest Nazi support were in rural Protestant areas such as Schleswig-Holstein, Mecklenburg, Pomerania, and East Prussia. Depressed working-class areas such as Thuringia also produced a strong Nazi vote, while the workers of the Ruhr and Hamburg largely remained loyal to the Social Democrats, the Communist Party of Germany, or the Catholic Centre Party. Nuremberg remained a Nazi Party stronghold, and the first Nuremberg Rally, a large annual propaganda rally, was held there in 1927. These rallies soon became massive displays of Nazi paramilitary power and attracted many recruits. The Nazis’ strongest appeal was to the lower middle-classes – farmers, public servants, teachers, small businessmen – who had suffered most from the inflation of the 1920s and thus feared Bolshevism more than anything else. The small business class was receptive to Hitler’s antisemitism, since it blamed Jewish big business for its economic problems. University students, disappointed at being too young to have served in the War of 1914–1918 and attracted by the Nazis’ radical rhetoric, also became a strong Nazi constituency. By 1929, the party had 130,000 members.

Despite its growth in popularity, the Nazi Party might never have come to power if not for the Great Depression and its effects on Germany. By 1930 the German economy was beset with mass unemployment and widespread business failures. The Social Democrats and Communists were bitterly divided and unable to formulate an effective solution. This gave the Nazis their opportunity; Hitler’s message, blaming the crisis on the Jewish financiers and the Bolsheviks, resonated with wide sections of the electorate. At the September 1930 Reichstag elections, the Nazis won 18.3% of the votes and became the second-largest party in the Reichstag after the SPD. Hitler proved a highly effective campaigner, pioneering the use of radio and aircraft for this purpose. His dismissal of Strasser and appointment of Goebbels as the party’s propaganda chief were major factors. While Strasser used his position to promote his own leftish version of national socialism, Goebbels was totally loyal to Hitler and worked only to improve Hitler’s image. Over the next several years, Hitler’s Nazi Party would continue to gain power and influence. 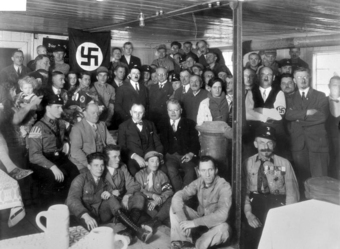