Hitler and the Third Reich

Adolf Hitler was born and raised in Austria-Hungary, was decorated during his service in the German Army in World War I, and began to rise to prominence in German politics with his vitriolic speeches promoting German nationalism, anti-semitism, and anti-communism.

Mein Kampf
A 1925 autobiographical book by Nazi Party leader Adolf Hitler. The work outlines Hitler’s political ideology and future plans for Germany. In it, Hitler used the main thesis of “the Jewish peril,” which posits a Jewish conspiracy to gain world leadership. The narrative describes the process by which he became increasingly antisemitic and militaristic, especially during his years in Vienna. He speaks of not having met a Jew until he arrived in Vienna, and that at first his attitude was liberal and tolerant. When he first encountered the anti-semitic press, he says, he dismissed it as unworthy of serious consideration. Later he accepted the same anti-semitic views, which became crucial in his program of national reconstruction of Germany.
Beer Hall Putsch
A failed coup attempt by the Nazi Party leader Adolf Hitler — along with Erich Ludendorff and others — to seize power in Munich, Bavaria, during November 8-9, 1923. About two thousand men marched to the center of Munich where they confronted the police, which resulted in the death of 16 Nazis and four policemen.
National Socialist German Workers Party
A political party in Germany that was active between 1920 and 1945 and practiced the ideology of Nazism. Its precursor, the German Workers’ Party (Deutsche Arbeiterpartei; DAP), existed from 1919 to 1920. The party emerged from the German nationalist, racist, and populist Freikorps paramilitary culture, which fought against the communist uprisings in post-World War I Germany. The party was created to draw workers away from communism and into völkisch nationalism.

Adolf Hitler (April 20, 1889 – April 30, 1945) was a German politician who was the leader of the Nazi Party (Nationalsozialistische Deutsche Arbeiterpartei; NSDAP), Chancellor of Germany from 1933 to 1945, and Führer (“Leader”) of Nazi Germany from 1934 to 1945. As dictator of the German Reich, he initiated World War II in Europe with the invasion of Poland in September 1939 and was central to the Holocaust.

By 1933, the Nazi Party was the largest elected party in the German Reichstag, which led to Hitler’s appointment as Chancellor on January 30, 1933. Following fresh elections won by his coalition, the Reichstag passed the Enabling Act, which began the process of transforming the Weimar Republic into Nazi Germany, a one-party dictatorship based on the totalitarian and autocratic ideology of National Socialism. Hitler aimed to eliminate Jews from Germany and establish a New Order to counter what he saw as the injustice of the post-World War I international order dominated by Britain and France. His first six years in power resulted in rapid economic recovery from the Great Depression, the effective abandonment of restrictions imposed on Germany after World War I, and the annexation of territories that were home to millions of ethnic Germans — actions that gave him significant popular support.

Hitler sought Lebensraum (“living space”) for the German people in Eastern Europe. His aggressive foreign policy is considered to be the primary cause of the outbreak of World War II in Europe. He directed large-scale rearmament and on September 1, 1939, invaded Poland, resulting in British and French declarations of war on Germany. In June 1941, Hitler ordered an invasion of the Soviet Union. By the end of 1941 German forces and the European Axis powers occupied most of Europe and North Africa. Failure to defeat the Soviets and the entry of the United States into the war forced Germany onto the defensive, and it suffered a series of escalating defeats. In the final days of the war, during the Battle of Berlin in 1945, Hitler married his long-time lover, Eva Braun. On April 30, 1945, less than two days later, the two killed themselves to avoid capture by the Red Army, and their corpses were burned.

Adolf Hitler was born on April 20, 1889 in Braunau am Inn, a town in Austria-Hungary (in present-day Austria), close to the border with the German Empire. He was one of six children born to Alois Hitler and Klara Pölzl. Three of Hitler’s siblings—Gustav, Ida, and Otto—died in infancy. When Hitler was three, the family moved to Passau, Germany. There he acquired the distinctive lower Bavarian dialect rather than Austrian German, which marked his speech throughout his life. The family returned to Austria and settled in Leonding in 1894, and in June 1895 Alois retired to Hafeld, near Lambach, where he farmed and kept bees. Hitler attended Volksschule (a state-owned school) in nearby Fischlham.

The move to Hafeld coincided with the onset of intense father-son conflicts caused by Hitler’s refusal to conform to the strict discipline of his school. Alois Hitler’s farming efforts at Hafeld ended in failure, and in 1897 the family moved to Lambach. The eight-year-old Hitler took singing lessons, sang in the church choir, and even considered becoming a priest. In 1898 the family returned permanently to Leonding. Hitler was deeply affected by the death of his younger brother Edmund, who died in 1900 from measles. Hitler changed from a confident, outgoing, conscientious student to a morose, detached boy who constantly fought with his father and teachers.

After Alois’s sudden death on January 3, 1903, Hitler’s performance at school deteriorated and his mother allowed him to leave. He enrolled at the Realschule in Steyr in September 1904, where his behavior and performance improved. In 1905, after passing a repeat of the final exam, Hitler left the school without any ambitions for further education or clear plans for a career.

From 1905, Hitler lived a bohemian life in Vienna, financed by orphan’s benefits and support from his mother. He worked as a casual laborer and eventually as a painter, selling watercolors of Vienna’s sights. The Academy of Fine Arts Vienna rejected him in 1907 and again in 1908, citing “unfitness for painting.” The director recommended that Hitler study architecture, which was another of his interests, but he lacked academic credentials as he had not finished secondary school. On December 21, 1907, his mother died of breast cancer at the age of 47. Hitler ran out of money and was forced to live in homeless shelters and men’s hostels.

At the time Hitler lived there, Vienna was a hotbed of religious prejudice and racism. Fears of being overrun by immigrants from the East were widespread, and the populist mayor Karl Lueger exploited the rhetoric of virulent anti-Semitism for political effect. German nationalism had a widespread following in the Mariahilf district where Hitler lived. German nationalist Georg Ritter von Schönerer, who advocated Pan-Germanism, anti-Semitism, anti-Slavism, and anti-Catholicism, was one influence on Hitler. Hitler read local newspapers such as the Deutsches Volksblatt that fanned prejudice and played on Christian fears of being swamped by an influx of Eastern European Jews.

In 1914, at the outbreak of World War I, Hitler was living in Munich and voluntarily enlisted in the Bavarian Army. Posted to the Bavarian Reserve Infantry Regiment 16, he served as a dispatch runner on the Western Front in France and Belgium, spending nearly half his time at the regimental headquarters in Fournes-en-Weppes, well behind the front lines. He was present at the First Battle of Ypres, the Battle of the Somme, the Battle of Arras, and the Battle of Passchendaele, and was wounded at the Somme. He was decorated for bravery, receiving the Iron Cross, Second Class, in 1914. 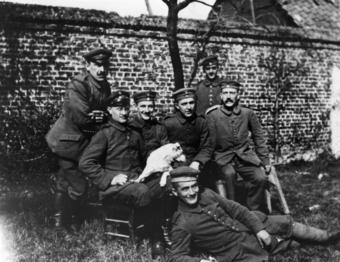 Hitler in World War I: Hitler (far right, seated) with his army comrades of the Bavarian Reserve Infantry Regiment 16 (c. 1914–18)

After World War I, Hitler returned to Munich. With no formal education or career prospects, he remained in the army. In July 1919 he was appointed an intelligence agent, assigned to influence other soldiers and infiltrate the German Workers’ Party (DAP).

At the DAP, Hitler met Dietrich Eckart, one of the party’s founders and a member of the occult Thule Society. Eckart became Hitler’s mentor, exchanging ideas with him and introducing him to a wide range of Munich society. To increase its appeal, the DAP changed its name to the Nationalsozialistische Deutsche Arbeiterpartei (National Socialist German Workers Party; NSDAP). Hitler designed the party’s banner of a swastika in a white circle on a red background.

Hitler was discharged from the army on March 31, 1920, and began working full-time for the NSDAP. The party headquarters was in Munich, a hotbed of anti-government German nationalists determined to crush Marxism and undermine the Weimar Republic. In February 1921 — already highly effective at speaking to large audiences — he addressed a crowd of over 6,000. To publicize the meeting, two truckloads of party supporters drove around Munich waving swastika flags and distributing leaflets. Hitler soon gained notoriety for his rowdy polemic speeches against the Treaty of Versailles, rival politicians, and especially Marxists and Jews.

Hitler’s vitriolic beer hall speeches began attracting regular audiences. He became adept at using populist themes, including the use of scapegoats, who were blamed for his listeners’ economic hardships. Hitler used personal magnetism and an understanding of crowd psychology to his advantage while engaged in public speaking. Historians have noted the hypnotic effect of his rhetoric on large audiences, and of his eyes in small groups. Alfons Heck, a former member of the Hitler Youth, later recalled:

We erupted into a frenzy of nationalistic pride that bordered on hysteria. For minutes on end, we shouted at the top of our lungs, with tears streaming down our faces: Sieg Heil, Sieg Heil, Sieg Heil! From that moment on, I belonged to Adolf Hitler body and soul.

In 1923 Hitler enlisted the help of World War I General Erich Ludendorff for an attempted coup known as the “Beer Hall Putsch.” The NSDAP used Italian Fascism as a model for their appearance and policies. Hitler wanted to emulate Benito Mussolini’s “March on Rome” of 1922 by staging his own coup in Bavaria, to be followed by a challenge to the government in Berlin.

On November 8, 1923, Hitler and the SA stormed a public meeting of 3,000 people organized by Gustav Ritter von Kahr (Bavaria’s de facto ruler) in the Bürgerbräukeller, a beer hall in Munich. Interrupting Kahr’s speech, he announced that the national revolution had begun and declared the formation of a new government with Ludendorff.

Hitler’s forces initially succeeded in occupying the local Reichswehr and police headquarters, but Kahr and his cohorts quickly withdrew their support. Neither the army nor the state police joined forces with Hitler. The next day, Hitler and his followers marched from the beer hall to the Bavarian War Ministry to overthrow the Bavarian government, but police dispersed them. Sixteen NSDAP members and four police officers were killed in the failed coup.

Hitler fled to the home of Ernst Hanfstaengl and by some accounts contemplated suicide. He was depressed but calm when arrested on November 11, 1923 for high treason. On April 1, Hitler was sentenced to five years’ imprisonment at Landsberg Prison.

While at Landsberg, Hitler dictated most of the first volume of Mein Kampf (My Struggle; originally entitled Four and a Half Years of Struggle against Lies, Stupidity, and Cowardice) to his deputy, Rudolf Hess. The book, dedicated to Thule Society member Dietrich Eckart, was an autobiography and exposition of his ideology. The book laid out Hitler’s plans for transforming German society into one based on race. Some passages implied genocide. Published in two volumes in 1925 and 1926, it sold 228,000 copies between 1925 and 1932. One million copies were sold in 1933, Hitler’s first year in office. 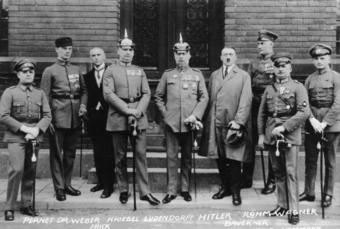