The Decline of European Democracy

30.4.5: The Decline of European Democracy

The conditions of economic hardship caused by the Great Depression brought about significant social unrest around the world, leading to a major surge of fascism and in many cases, the collapse of democratic governments.

modernity
A term used in the humanities and social sciences to designate both a historical period as well as the ensemble of particular socio-cultural norms, attitudes, and practices that arose in post-medieval Europe and have developed since, in various ways and at various times, around the world. As a historical category, it refers to a period marked by a questioning or rejection of tradition; the prioritization of individualism, freedom, and formal equality; faith in inevitable social, scientific, and technological progress and human perfectibility; rationalization and professionalization; a movement from feudalism (or agrarianism) toward capitalism and the market economy; industrialization, urbanization, and secularization; and the development of the nation-state and its constituent institutions (e.g. representative democracy, public education, modern bureaucracy).
Iron Guard
The name most commonly given to a far-right movement and political party in Romania in the period from 1927 into the early part of World War II. It was ultra-nationalist, antisemitic, anti-communist, anti-capitalist, and promoted the Orthodox Christian faith. Its members were called “Greenshirts” because of the predominantly green uniforms they wore.
Beer Hall Putsch
A failed coup attempt by the Nazi Party leader Adolf Hitler to seize power in Munich, Bavaria, during November 8-9, 1923. About two thousand men marched to the center of Munich where they confronted the police, resulting in the death of 16 Nazis and four policemen.

The March on Rome, through which Mussolini became Prime Minister of Italy, brought Fascism international attention. One early admirer of the Italian Fascists was Adolf Hitler, who, less than a month after the March, had begun to model himself and the Nazi Party upon Mussolini and the Fascists. The Nazis, led by Hitler and the German war hero Erich Ludendorff, attempted a “March on Berlin” modeled upon the March on Rome, which resulted in the failed Beer Hall Putsch in Munich in November 1923. The Nazis briefly captured Bavarian Minister President Gustav Ritter von Kahr and announced the creation of a new German government to be led by a triumvirate of von Kahr, Hitler, and Ludendorff. The Beer Hall Putsch was crushed by Bavarian police, and Hitler and other leading Nazis were arrested and detained until 1925.

Another early admirer of Italian Fascism was Gyula Gömbös, leader of the Hungarian National Defence Association (known by its acronym MOVE) and a self-defined “national socialist” who in 1919 spoke of the need for major changes in property and in 1923 stated the need of a “march on Budapest.” Yugoslavia briefly had a significant fascist movement, the Organization of Yugoslav Nationalists (ORJUNA), that supported Yugoslavism, supported the creation of a corporatist economy, opposed democracy, and took part in violent attacks on communists, though it was opposed to the Italian government due to Yugoslav border disputes with Italy. ORJUNA was dissolved in 1929 when the King of Yugoslavia banned political parties and created a royal dictatorship, though ORJUNA supported the King’s decision.

Amid a political crisis in Spain involving increased strike activity and rising support for anarchism, Spanish army commander Miguel Primo de Rivera engaged in a successful coup against the Spanish government in 1923 and installed himself as a dictator as head of a conservative military junta that dismantled the established party system of government. Upon achieving power, Primo de Rivera sought to resolve the economic crisis by presenting himself as a compromise arbitrator figure between workers and bosses, and his regime created a corporatist economic system based on the Italian Fascist model. In Lithuania in 1926, Antanas Smetona rose to power and founded a fascist regime under his Lithuanian Nationalist Union. 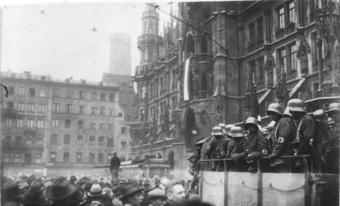 Beer Hall Putsch:  Nazis in Munich during the Beer Hall Putsch, a failed coup attempt by the Nazi Party leader Adolf Hitler to seize power in Munich, Bavaria, during November 8-9, 1923. About two thousand men marched to the center of Munich where they confronted the police, resulting in the death of 16 Nazis and four policemen.

The Great Depression and the Spread of Fascism

The events of the Great Depression resulted in an international surge of fascism and the creation of several fascist regimes and regimes that adopted fascist policies. According to historian Philip Morgan, “the onset of the Great Depression…was the greatest stimulus yet to the diffusion and expansion of fascism outside Italy.” Fascist propaganda blamed the problems of the long depression of the 1930s on minorities and scapegoats: “Judeo-Masonic-bolshevik” conspiracies, left-wing internationalism, and the presence of immigrants.

In Germany, it contributed to the rise of the National Socialist German Workers’ Party, which resulted in the demise of the Weimar Republic and the establishment of the fascist regime, Nazi Germany, under the leadership of Adolf Hitler. With the rise of Hitler and the Nazis to power in 1933, liberal democracy was dissolved in Germany, and the Nazis mobilized the country for war, with expansionist territorial aims against several countries. In the 1930s the Nazis implemented racial laws that deliberately discriminated against, disenfranchised, and persecuted Jews and other racial and minority groups.

Fascist movements grew stronger elsewhere in Europe. Hungarian fascist Gyula Gömbös rose to power as Prime Minister of Hungary in 1932 and attempted to entrench his Party of National Unity throughout the country; he created an eight-hour work day and a 48-hour work week in industry, sought to entrench a corporatist economy, and pursued irredentist claims on Hungary’s neighbors.

The fascist Iron Guard movement in Romania soared in political support after 1933, gaining representation in the Romanian government, and an Iron Guard member assassinated Romanian prime minister Ion Duca. During the February 6, 1934 crisis, France faced the greatest domestic political turmoil since the Dreyfus Affair when the fascist Francist Movement and multiple far-right movements rioted en masse in Paris against the French government resulting in major political violence. A variety of para-fascist governments that borrowed elements from fascism were formed during the Great Depression, including those of Greece, Lithuania, Poland, and Yugoslavia.

Fascism also expanded its influence outside Europe, especially in East Asia, the Middle East, and South America. In China, Wang Jingwei’s Kai-tsu p’ai (Reorganization) faction of the Kuomintang (Nationalist Party of China) supported Nazism in the late 1930s. In Japan, a Nazi movement called the Tōhōkai was formed by Seigō Nakano. The Al-Muthanna Club of Iraq was a pan-Arab movement that supported Nazism and exercised its influence in the Iraqi government through cabinet minister Saib Shawkat, who formed a paramilitary youth movement.

Several, mostly short-lived fascist governments and prominent fascist movements were formed in South America during this period. Argentine President General José Félix Uriburu proposed that Argentina be reorganized along corporatist and fascist lines. Peruvian president Luis Miguel Sánchez Cerro founded the Revolutionary Union in 1931 as the state party for his dictatorship. It was later taken over by Raúl Ferrero Rebagliati who sought to mobilize mass support for the group’s nationalism in a manner akin to fascism. He even started a paramilitary Blackshirts arm as a copy of the Italian group, although the Union lost heavily in the 1936 elections and faded into obscurity. In Paraguay in 1940, Paraguayan President General Higinio Morínigo began his rule as a dictator with the support of pro-fascist military officers, appealed to the masses, exiled opposition leaders, and only abandoned his pro-fascist policies after the end of World War II. The Brazilian Integralists, led by Plínio Salgado, claimed as many as 200,000 members, although following coup attempts it faced a crackdown from the Estado Novo of Getúlio Vargas in 1937. In the 1930s, the National Socialist Movement of Chile gained seats in Chile’s parliament and attempted a coup d’état that resulted in the Seguro Obrero massacre of 1938.

Fascism in its Epoch

Fascism in its Epoch is a 1963 book by historian and philosopher Ernst Nolte, widely regarded as his magnum opus and a seminal work on the history of fascism. The book, translated into English in 1965 as The Three Faces of Fascism, argues that fascism arose as a form of resistance to and a reaction against modernity. Nolte subjected German Nazism, Italian Fascism, and the French Action Française movements to a comparative analysis. Nolte’s conclusion was that fascism was the great anti-movement: it was anti-liberal, anti-communist, anti-capitalist, and anti-bourgeois. In Nolte’s view, fascism was the rejection of everything the modern world had to offer and was an essentially negative phenomenon. Nolte argued that fascism functioned at three levels: in the world of politics as a form of opposition to Marxism, at the sociological level in opposition to bourgeois values, and in the “metapolitical” world as “resistance to transcendence” (“transcendence” in German can be translated as the “spirit of modernity”). In regard to the Holocaust, Nolte contended that because Adolf Hitler identified Jews with modernity, the basic thrust of Nazi policies towards Jews had always aimed at genocide: “Auschwitz was contained in the principles of Nazi racist theory like the seed in the fruit.” Nolte believed that for Hitler, Jews represented “the historical process itself.”