Several historians believe that during the Spanish Civil War, General Francisco Franco’s goal was to turn Spain into a totalitarian state like Nazi Germany and Fascist Italy, which he largely succeeded in doing.

Summarize the rise of the Franco regime in Spain

Francisco Franco
A Spanish general who ruled over Spain as a dictator for 36 years from 1939 until his death. He took control of Spain from the government of the Second Spanish Republic after winning the Civil War, and was in power 1978, when the Spanish Constitution of 1978 went into effect.
personality cult
When an individual uses mass media, propaganda, or other methods to create an idealized, heroic, and at times worshipful image, often through unquestioned flattery and praise.
Spanish Civil War
A war from 1936 to 1939 between the Republicans, who were loyal to the democratic, left-leaning and relatively urban Second Spanish Republic in an alliance of convenience with the Anarchists, and the Nationalists, a falangist, Carlist, and a largely aristocratic conservative group led by General Francisco Franco.
Falangism
A Fascist movement founded in Spain in 1933 and the one legal party in Spain under the regime of Franco.

As a conservative and a monarchist, he opposed the abolition of the monarchy and the establishment of a republic in 1931. With the 1936 elections, the conservative Spanish Confederation of Autonomous Right-wing Groups lost by a narrow margin and the leftist Popular Front came to power. Intending to overthrow the republic, Franco followed other generals in attempting a failed coup that precipitated the Spanish Civil War. With the death of the other generals, Franco quickly became his faction’s only leader. In 1947, he declared Spain a monarchy with himself as regent.

Franco gained military support from various regimes and groups, especially Nazi Germany and the Kingdom of Italy, while the Republican side was supported by Spanish communists and anarchists as well as the Soviet Union, Mexico, and the International Brigades. Leaving half a million dead, the war was eventually won by Franco in 1939. He established a military dictatorship, which he defined as a totalitarian state. Franco proclaimed himself Head of State and Government under the title El Caudillo, a term similar to Il Duce (Italian) for Benito Mussolini and Der Führer (German) for Adolf Hitler. Under Franco, Spain became a one-party state, as the various conservative and royalist factions were merged into the fascist party and other political parties were outlawed.

Franco’s regime committed a series of violent human rights abuses against the Spanish people, which included the establishment of concentration camps and the use of forced labor and executions, mostly against political and ideological enemies, causing an estimated 200,000 to 400,000 deaths in more than 190 concentration camps. Spain’s entry into the war on the Axis side was prevented largely by, as was much later revealed, British Secret Intelligence Service (MI-6) efforts that included up to $200 million in bribes for Spanish officials to keep the regime from getting involved. Franco was also able to take advantage of the resources of the Axis Powers and chose to avoid becoming heavily involved in the Second World War. 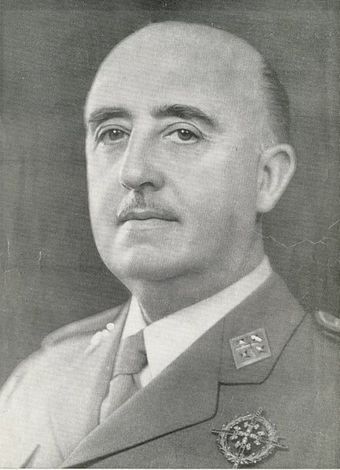 Francisco Franco: A photo of Francisco Franco in 1964. Franco strove to establish a fascist dictatorship similar to that of Germany and Italy, but in the end did not join the Axis in WWII.

The consistent points in Francoism included authoritarianism, nationalism, national Catholicism, militarism, conservatism, anti-communism, and anti-liberalism. The Spanish State was authoritarian: non-government trade unions and all political opponents across the political spectrum were either suppressed or controlled by all means, including police repression. Most country towns and rural areas were patrolled by pairs of Guardia Civil, a military police for civilians, which functioned as a chief means of social control. Larger cities and capitals were mostly under the heavily armed Policía Armada, commonly called grises due to their grey uniforms. Franco was also the focus of a personality cult which taught that he had been sent by Divine Providence to save the country from chaos and poverty.

Franco’s Spanish nationalism promoted a unitary national identity by repressing Spain’s cultural diversity. Bullfighting and flamenco were promoted as national traditions, while those traditions not considered Spanish were suppressed. Franco’s view of Spanish tradition was somewhat artificial and arbitrary: while some regional traditions were suppressed, Flamenco, an Andalusian tradition, was considered part of a larger, national identity. All cultural activities were subject to censorship, and many were forbidden entirely, often in an erratic manner.

Francoism professed a strong devotion to militarism, hypermasculinity, and the traditional role of women in society. A woman was to be loving to her parents and brothers and faithful to her husband, and reside with her family. Official propaganda confined women’s roles to family care and motherhood. Most progressive laws passed by the Second Republic were declared void. Women could not become judges, testify in trial, or become university professors.

The Civil War had ravaged the Spanish economy. Infrastructure had been damaged, workers killed, and daily business severely hampered. For more than a decade after Franco’s victory, the economy improved little. Franco initially pursued a policy of autarky, cutting off almost all international trade. The policy had devastating effects, and the economy stagnated. Only black marketeers could enjoy an evident affluence. Up to 200,000 people died of starvation during the early years of Francoism, a period known as Los Años de Hambre (the Years of Hunger).

Falangism was the political ideology of the Falange Española de las JONS and, afterwards, of the Falange Española Tradicionalista y de las Juntas de Ofensiva Nacional Sindicalista (both known simply as the “Falange”), as well as derivatives of it in other countries. Falangism is widely considered a fascist ideology. Under the leadership of Francisco Franco, many of the radical elements of Falangism considered fascist were diluted, and it largely became an authoritarian, conservative ideology connected with Francoist Spain. Opponents of Franco’s changes to the party include former Falange leader Manuel Hedilla. Falangism places a strong emphasis on Catholic religious identity, though it held some secular views on the Church’s direct influence in society as it believed that the state should have the supreme authority over the nation. Falangism emphasized the need for authority, hierarchy, and order in society. Falangism is anti-communist, anti-capitalist, anti-democratic, and anti-liberal, although under Franco, the Falange abandoned its original anti-capitalist tendencies, declaring the ideology to be fully compatible with capitalism.

The Falange’s original manifesto, the “Twenty-Seven Points,” declared Falangism to support the unity of Spain and the elimination of regional separatism; established a dictatorship led by the Falange; used violence to regenerate Spain; promoted the revival and development of the Spanish Empire; and championed a social revolution to create a national syndicalist economy to mutually organize and control economic activity, agrarian reform, industrial expansion, and respect for private property with the exception of nationalizing credit facilities to prevent capitalist usury. It supports criminalization of strikes by employees and lockouts by employers as illegal acts. Falangism supports the state to have jurisdiction of setting wages. The Franco-era Falange supported the development of cooperatives such as the Mondragon Corporation, because it bolstered the Francoist claim of the nonexistence of social classes in Spain during his rule.