During the 1930s, Japan moved into political totalitarianism, ultranationalism, and fascism, culminating in its invasion of China in 1937.

Examine how fascism manifested itself in Japan

Meiji Restoration
An event that restored practical imperial rule to Japan in 1868 under Emperor Meiji, leading to enormous changes in Japan’s political and social structure and spanning both the late Edo period (often called the Late Tokugawa shogunate) and the beginning of the Meiji period. The period spanned from 1868 to 1912 and was responsible for the emergence of Japan as a modernized nation in the early 20th century, and its rapid rise to great power status in the international system.
Shinto
A Japanese ethnic religion that focuses on ritual practices carried out diligently to establish a connection between present-day Japan and its ancient past. Its practices were first recorded and codified in the written historical records of the Kojiki and Nihon Shoki in the 8th century. This term applies to the religion of public shrines devoted to the worship of a multitude of gods (kami), suited to various purposes such as war memorials and harvest festivals.
Shōwa period
The period of Japanese history corresponding to the reign of the Shōwa Emperor, Hirohito, from December 25, 1926, through January 7, 1989. This period was longer than the reign of any previous Japanese emperor. During the pre-1945 period, Japan moved into political totalitarianism, ultranationalism, and fascism culminating in Japan’s invasion of China in 1937. This was part of an overall global period of social upheavals and conflicts, such as the Great Depression and World War II. Defeat in World War II brought radical change to Japan.
statism
The belief that the state should control either economic or social policy or both, sometimes taking the form of totalitarianism, but not necessarily. It is effectively the opposite of anarchism.

Statism in Shōwa Japan was a right-wing political ideology developed over a period of time from the Meiji Restoration of the 1860s. It is sometimes also referred to as Shōwa nationalism or Japanese fascism.

This statist movement dominated Japanese politics during the first part of the Shōwa period (reign of Hirohito). It was a mixture of ideas such as Japanese nationalism and militarism and “state capitalism” proposed by contemporary political philosophers and thinkers.

The 1919 Treaty of Versailles that ended World War I did not recognize the Empire of Japan’s territorial claims, and international naval treaties between Western powers and the Empire of Japan (Washington Naval Treaty and London Naval Treaty) imposed limitations on naval shipbuilding that limited the size of the Imperial Japanese Navy. These measures were considered by many in Japan as refusal by the Occidental powers to consider Japan an equal partner.

On the basis of national security, these events released a surge of Japanese nationalism and resulted in the end of collaboration diplomacy that supported peaceful economic expansion. The implementation of a military dictatorship and territorial expansionism were considered the best ways to protect Japan.

In the early 1930s, the Ministry of Home Affairs began arresting left-wing political dissidents, generally to exact a confession and renouncement of anti-state leanings. Over 30,000 such arrests were made between 1930 and 1933. In response, a large group of writers founded a Japanese branch of the International Popular Front Against Fascism and published articles in major literary journals warning of the dangers of statism.

Ikki Kita was an early 20th-century political theorist who advocated a hybrid of state socialism with “Asian nationalism,” which blended the early ultranationalist movement with Japanese militarism. Kita proposed a military coup d’état to replace the existing political structure of Japan with a military dictatorship. The new military leadership would rescind the Meiji Constitution, ban political parties, replace the Diet of Japan with an assembly free of corruption, and nationalize major industries. Kita also envisioned strict limits to private ownership of property and land reform to improve the lot of tenant farmers. Thus strengthened internally, Japan could then embark on a crusade to free all of Asia from Western imperialism.

Although his works were banned by the government almost immediately after publication, circulation was widespread, and his thesis proved popular not only with the younger officer class excited at the prospects of military rule and Japanese expansionism, but with the populist movement for its appeal to the agrarian classes and to the left wing of the socialist movement.

In the 1920s and 1930s, the supporters of Japanese statism used the slogan Showa Restoration, which implied that a new resolution was needed to replace the existing political order dominated by corrupt politicians and capitalists, with one which (in their eyes), would fulfill the original goals of the Meiji Restoration of direct Imperial rule via military proxies.

Early Shōwa statism is sometimes given the retrospective label “fascism,” but this was not a self-appellation and it is not entirely clear that the comparison is accurate. When authoritarian tools of the state such as the Kempeitai were put into use in the early Shōwa period, they were employed to protect the rule of law under the Meiji Constitution from perceived enemies on both the left and the right.

Nationalist Politics During the Shōwa Period

Emperor Hirohito’s 63-year reign from 1926 to 1989 is the longest in recorded Japanese history. The first 20 years were characterized by the rise of extreme nationalism and a series of expansionist wars. After suffering defeat in World War II, Japan was occupied by foreign powers for the first time in its history, then re-emerged as a major world economic power.

Left-wing groups had been subject to violent suppression by the end of the Taishō period, and radical right-wing groups, inspired by fascism and Japanese nationalism, rapidly grew in popularity. The extreme right became influential throughout the Japanese government and society, notably within the Kwantung Army, a Japanese army stationed in China along the Japanese-owned South Manchuria Railroad. During the Manchurian Incident of 1931, radical army officers bombed a small portion of the South Manchuria Railroad and, falsely attributing the attack to the Chinese, invaded Manchuria. The Kwantung Army conquered Manchuria and set up the puppet government of Manchukuo there without permission from the Japanese government. International criticism of Japan following the invasion led to Japan withdrawing from the League of Nations.

The withdrawal from the League of Nations meant that Japan was politically isolated. Japan had no strong allies and its actions had been internationally condemned, while internally popular nationalism was booming. Local leaders such as mayors, teachers, and Shinto priests were recruited by the various movements to indoctrinate the populace with ultra-nationalist ideals. They had little time for the pragmatic ideas of the business elite and party politicians. Their loyalty lay to the Emperor and the military. In March 1932 the “League of Blood” assassination plot and the chaos surrounding the trial of its conspirators further eroded the rule of democratic law in Shōwa Japan. In May of the same year, a group of right-wing Army and Navy officers succeeded in assassinating the Prime Minister Inukai Tsuyoshi. The plot fell short of staging a complete coup d’état, but effectively ended rule by political parties in Japan.

Japan’s expansionist vision grew increasingly bold. Many of Japan’s political elite aspired to have Japan acquire new territory for resource extraction and settlement of surplus population. These ambitions led to the outbreak of the Second Sino-Japanese War in 1937. After their victory in the Chinese capital, the Japanese military committed the infamous Nanking Massacre. The Japanese military failed to defeat the Chinese government led by Chiang Kai-shek and the war descended into a bloody stalemate that lasted until 1945. Japan’s stated war aim was to establish the Greater East Asia Co-Prosperity Sphere, a vast pan-Asian union under Japanese domination. Hirohito’s role in Japan’s foreign wars remains a subject of controversy, with various historians portraying him as either a powerless figurehead or an enabler and supporter of Japanese militarism.

The United States opposed Japan’s invasion of China and responded with increasingly stringent economic sanctions intended to deprive Japan of the resources to continue its war in China. Japan reacted by forging an alliance with Germany and Italy in 1940, known as the Tripartite Pact, which worsened its relations with the U.S. In July 1941, the United States, Great Britain, and the Netherlands froze all Japanese assets when Japan completed its invasion of French Indochina by occupying the southern half of the country, further increasing tension in the Pacific. 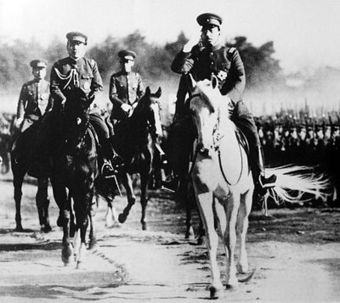 Statism in Japan: Emperor Shōwa riding his stallion Shirayuki during an Army inspection, August 1938. By the 1930’s, Japan had essentially become a military dictatorship with increasingly bold expansionist aims.