Fascism is a form of radical authoritarian nationalism that came to prominence in early 20th-century Europe, characterized by one-party totalitarian regimes run by charismatic dictators, glorification of violence, and racist ideology.

Social Darwinism
A name given to various ideologies emerging in the second half of the 19th century, trying to apply biological concepts of natural selection and survival of the fittest in human society. It was largely developed by Herbert Spencer, who compared society to a living organism and argued that just as biological organisms evolve through natural selection, society evolves and increases in complexity through analogous processes.
fascism
A form of radical authoritarian nationalism that came to prominence in early 20th-century Europe. It holds that liberal democracy is obsolete and that the complete mobilization of society under a totalitarian one-party state is necessary to prepare a nation for armed conflict and to respond effectively to economic difficulties.
fin-de-siècle
French for end of the century, a term which typically encompasses both the meaning of the similar English idiom turn of the century and also makes reference to the closing of one era and onset of another. The term is typically used to refer to the end of the 19th century. This was widely thought to be a period of degeneration, but at the same time one of hope for a new beginning. It often refers to the cultural hallmarks that were recognized as prominent in the 1880s and 1890s, including ennui, cynicism, pessimism, and “…a widespread belief that civilization leads to decadence.”

Fascism is a form of radical authoritarian nationalism that came to prominence in early 20th-century Europe. The first fascist movements emerged in Italy during World War I, then spread to other European countries. Opposed to liberalism, Marxism, and anarchism, fascism is usually placed on the far-right within the traditional left–right spectrum.

Fascists saw World War I as a revolution that brought massive changes to the nature of war, society, the state, and technology. The advent of total war and the total mass mobilization of society had broken down the distinction between civilians and combatants. A “military citizenship” arose in which all citizens were involved with the military in some manner during the war. The war resulted in the rise of a powerful state capable of mobilizing millions of people to serve on the front lines and providing economic production and logistics to support them, as well as having unprecedented authority to intervene in the lives of citizens.

Fascists believe that liberal democracy is obsolete, and they regard the complete mobilization of society under a totalitarian one-party state as necessary to prepare a nation for armed conflict and respond effectively to economic difficulties. Such a state is led by a strong leader—such as a dictator and a martial government composed of the members of the governing fascist party—to forge national unity and maintain a stable and orderly society. Fascism rejects assertions that violence is automatically negative in nature, and views political violence, war, and imperialism as means that can achieve national rejuvenation. Fascists advocate a mixed economy with the principal goal of achieving autarky (self-sufficiency) through protectionist and interventionist economic policies.

Historian Robert Paxton says that fascism is “a form of political behavior marked by obsessive preoccupation with community decline, humiliation, or victimhood and by compensatory cults of unity, energy, and purity, in which a mass-based party of committed nationalist militants, working in uneasy but effective collaboration with traditional elites, abandons democratic liberties and pursues with redemptive violence and without ethical or legal restraints goals of internal cleansing and external expansion.”

Since the end of World War II in 1945, few parties have openly described themselves as fascist, and the term is instead now usually used pejoratively by political opponents. The terms neo-fascist or post-fascist are sometimes applied more formally to describe parties of the far right with ideologies similar to or rooted in 20th century fascist movements.

The term fascist comes from the Italian word fascismo, derived from fascio meaning a bundle of rods, ultimately from the Latin word fasces. This was the name given to political organizations in Italy known as fasci, groups similar to guilds or syndicates. At first, it was applied mainly to organizations on the political left. In 1919, Benito Mussolini founded the Fasci Italiani di Combattimento in Milan, which became the Partito Nazionale Fascista (National Fascist Party) two years later. The Fascists came to associate the term with the ancient Roman fasces or fascio littorio—a bundle of rods tied around an axe, an ancient Roman symbol of the authority of the civic magistrate carried by his lictors, which could be used for corporal and capital punishment at his command. The symbolism of the fasces suggested strength through unity: a single rod is easily broken, while the bundle is difficult to break.

The historian Zeev Sternhell has traced the ideological roots of fascism back to the 1880s, and in particular to the fin-de-siècle (French for “end of the century”) theme of that time. This ideology was based on a revolt against materialism, rationalism, positivism, bourgeois society, and democracy. The fin-de-siècle generation supported emotionalism, irrationalism, subjectivism, and vitalism. The fin-de-siècle mindset saw civilization as being in a crisis that required a massive and total solution. Its intellectual school considered the individual only one part of the larger collectivity, which should not be viewed as an atomized numerical sum of individuals. They condemned the rationalistic individualism of liberal society and the dissolution of social links in bourgeois society.

Social Darwinism, which gained widespread acceptance, made no distinction between physical and social life, and viewed the human condition as being an unceasing struggle to achieve the survival of the fittest. Social Darwinism challenged positivism’s claim of deliberate and rational choice as the determining behavior of humans, focusing on heredity, race, and environment. Its emphasis on biogroup identity and the role of organic relations within societies fostered legitimacy and appeal for nationalism. New theories of social and political psychology also rejected the notion of human behavior being governed by rational choice, and instead claimed that emotion was more influential in political issues than reason.

At the outbreak of World War I in August 1914, the Italian political left became severely split over its position on the war. The Italian Socialist Party (PSI) opposed the war but a number of Italian revolutionary syndicalists supported war against Germany and Austria-Hungary on the grounds that their reactionary regimes had to be defeated to ensure the success of socialism. Angelo Oliviero Olivetti formed a pro-interventionist fascio called the Fasci of International Action in October 1914. Benito Mussolini, upon expulsion from his position as chief editor of the PSI’s newspaper Avanti! for his anti-German stance, joined the interventionist cause in a separate fascio. The term “Fascism” was first used in 1915 by members of Mussolini’s movement, the Fasci of Revolutionary Action.

The first meeting of the Fasci of Revolutionary Action was held in January 1915 when Mussolini declared that it was necessary for Europe to resolve its national problems—including national borders—of Italy and elsewhere “for the ideals of justice and liberty for which oppressed peoples must acquire the right to belong to those national communities from which they descended.” Attempts to hold mass meetings were ineffective, and the organization was regularly harassed by government authorities and socialists.

Similar political ideas arose in Germany after the outbreak of the war. German sociologist Johann Plenge spoke of the rise of a “National Socialism” in Germany within what he termed the “ideas of 1914” that were a declaration of war against the “ideas of 1789” (the French Revolution). According to Plenge, the “ideas of 1789” that included rights of man, democracy, individualism and liberalism were being rejected in favor of “the ideas of 1914” that included “German values” of duty, discipline, law, and order. Plenge believed that racial solidarity (Volksgemeinschaft) would replace class division and that “racial comrades” would unite to create a socialist society in the struggle of “proletarian” Germany against “capitalist” Britain. He believed that the “Spirit of 1914” manifested itself in the concept of the “People’s League of National Socialism.”

After the end of the World War I, fascism rose out of relative obscurity into international prominence, with fascist regimes forming most notably in Italy, Germany, and Japan, the three of which would be allied in World War II. Fascist Benito Mussolini seized power in Italy in 1922 and Adolf Hitler had successfully consolidated his power in Germany by 1933. 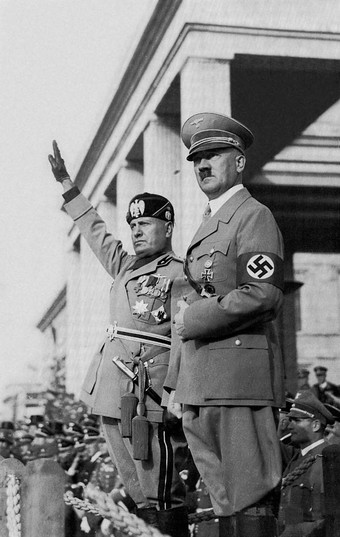 Hitler and Mussolini: Adolf Hitler and Benito Mussolini were the two most prominent fascist dictators, rising to power in the decades after World War I.