The Rise of Fascism

After aligning itself with Italian conservatives, the fascist party rose to prominence using violence and intimidation, eventually seizing power in Rome in 1922 under the leadership of Benito Mussolini.

Evaluate why Mussolini was able to seize power in Italy

Italian Fascism, also known simply as Fascism, is the original fascist ideology as developed in Italy. The ideology is associated with the Fascist Revolutionary Party (PFR), founded in 1915; the succeeding National Fascist Party (PNF) in 1921, which under Benito Mussolini ruled the Kingdom of Italy from 1922 until 1943; the Republican Fascist Party that ruled the Italian Social Republic from 1943 to 1945; and the post-war Italian Social Movement and subsequent Italian neo-fascist movements.

Italian Fascism was rooted in Italian nationalism and the desire to restore and expand Italian territories, deemed necessary for a nation to assert its superiority and strength and avoid succumbing to decay. Italian Fascists claimed that modern Italy is the heir to ancient Rome and its legacy, and historically supported the creation of an Italian Empire to provide spazio vitale (“living space”) for colonization by Italian settlers and to establish control over the Mediterranean Sea.

Italian Fascism promoted a corporatist economic system whereby employer and employee syndicates were linked together in associations to collectively represent the nation’s economic producers and work alongside the state to set national economic policy. This economic system intended to resolve class conflict through collaboration between the classes

The Rise of Fascism in Italy

The first meeting of the Fasci of Revolutionary Action was held on January 24, 1915, led by Benito Mussolini. In the next few years, the relatively small group was various political actions. In 1920, militant strike activity by industrial workers reached its peak in Italy. Mussolini and the Fascists took advantage of the situation by allying with industrial businesses and attacking workers and peasants in the name of preserving order and internal peace in Italy.

Fascists identified their primary opponents as the majority of socialists on the left who had opposed intervention in World War I. The Fascists and the Italian political right held common ground: both held Marxism in contempt, discounted class consciousness, and believed in the rule of elites. Fascism began to accommodate Italian conservatives by making major alterations to its political agenda—abandoning its previous populism, republicanism, and anticlericalism, adopting policies in support of free enterprise, and accepting the Roman Catholic Church and the monarchy as institutions in Italy.

To appeal to Italian conservatives, Fascism adopted policies such as promoting family values, including policies designed to reduce the number of women in the workforce by limiting the woman’s role to that of a mother. The fascists banned literature on birth control and increased penalties for abortion in 1926, declaring both crimes against the state. Though Fascism adopted a number of positions designed to appeal to reactionaries, the Fascists sought to maintain Fascism’s revolutionary character, with Angelo Oliviero Olivetti saying “Fascism would like to be conservative, but it will [be] by being revolutionary.” The Fascists supported revolutionary action and committed to secure law and order to appeal to both conservatives and syndicalists.

Beginning in 1922, Fascist paramilitaries escalated their strategy from attacking socialist offices and homes of socialist leadership figures to violent occupation of cities. The Fascists met little serious resistance from authorities and proceeded to take over several northern Italian cities. The Fascists attacked the headquarters of socialist and Catholic labor unions in Cremona and imposed forced Italianization upon the German-speaking population of Trent and Bolzano. After seizing these cities, the Fascists made plans to take Rome.

On October 24, 1922, the Fascist party held its annual congress in Naples, where Mussolini ordered Blackshirts to take control of public buildings and trains and converge on three points around Rome. The Fascists managed to seize control of several post offices and trains in northern Italy while the Italian government, led by a left-wing coalition, was internally divided and unable to respond to the Fascist advances. King Victor Emmanuel III of Italy thought the risk of bloodshed in Rome to disperse the Fascists was too high. Victor Emmanuel III decided to appoint Mussolini as Prime Minister of Italy, and Mussolini arrived in Rome on October 30 to accept the appointment. Fascist propaganda aggrandized this event, known as “March on Rome,” as a “seizure” of power because of Fascists’ heroic exploits. 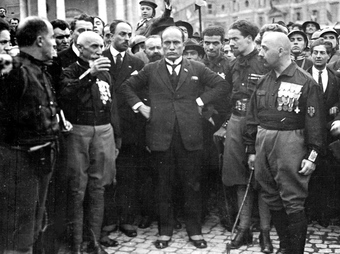 March on Rome: Benito Mussolini with three of the four quadrumvirs during the March on Rome: from left to right: unknown, de Bono, Mussolini, Balbo and de Vecchi.

Upon becoming Prime Minister of Italy, Mussolini had to form a coalition government, because the Fascists did not have control over the Italian parliament. Mussolini’s coalition government initially pursued economically liberal policies under the direction of liberal finance minister Alberto De Stefani, a member of the Center Party, including balancing the budget through deep cuts to the civil service. Initially, little drastic change in government policy occurred and repressive police actions were limited.

The Fascists began their attempt to entrench Fascism in Italy with the Acerbo Law, which guaranteed a plurality of the seats in parliament to any party or coalition list in an election that received 25% or more of the vote. Through considerable Fascist violence and intimidation, the list won a majority of the vote, allowing many seats to go to the Fascists. In the aftermath of the election, a crisis and political scandal erupted after Socialist Party deputy Giacomo Matteoti was kidnapped and murdered by a Fascist. The liberals and the leftist minority in parliament walked out in protest in what became known as the Aventine Secession.

On January 3, 1925, Mussolini addressed the Fascist-dominated Italian parliament and declared that he was personally responsible for what happened, but insisted that he had done nothing wrong. He proclaimed himself dictator of Italy, assuming full responsibility over the government and announcing the dismissal of parliament. From 1925 to 1929, Fascism steadily became entrenched in power; opposition deputies were denied access to parliament, censorship was introduced, and a December 1925 decree made Mussolini solely responsible to the King.

In the 1920s, Fascist Italy pursued an aggressive foreign policy that included an attack on the Greek island of Corfu, aims to expand Italian territory in the Balkans, plans to wage war against Turkey and Yugoslavia, attempts to bring Yugoslavia into civil war by supporting Croat and Macedonian separatists to legitimize Italian intervention, and making Albania a de facto protectorate of Italy, achieved through diplomatic means by 1927. In response to revolt in the Italian colony of Libya, Fascist Italy abandoned previous liberal-era colonial policy of cooperation with local leaders. Instead, claiming that Italians were superior to African races and thereby had the right to colonize the “inferior” Africans, it sought to settle 10 to 15 million Italians in Libya. This resulted in an aggressive military campaign known as the Pacification of Libya against natives in Libya, including mass killings, the use of concentration camps, and the forced starvation of thousands of people. Italian authorities committed ethnic cleansing by forcibly expelling 100,000 Bedouin Cyrenaicans, half the population of Cyrenaica in Libya, from their settlements, slated to be given to Italian settlers.