On June 28, 1914, Archduke Franz Ferdinand of Austria was shot dead in Sarajevo by Gavrilo Princip, one of a group of six assassins coordinated by Danilo Ilić, a Bosnian Serb and a member of the Black Hand secret society. This event led to a diplomatic crisis and the outbreak of World War I.

Black Hand
A secret military society formed on May 9, 1911, by officers in the Army of the Kingdom of Serbia, originating in the conspiracy group that assassinated the Serbian royal couple (1903) led by captain Dragutin Dimitrijević “Apis.”
irredentism
Any political or popular movement intended to reclaim and reoccupy a “lost” or “unredeemed” area; territorial claims are justified on the basis of real or imagined national and historic (an area formerly part of that state) or ethnic (an area inhabited by that nation or ethnic group) affiliations. It is often advocated by nationalist and pan-nationalist movements and has been a feature of identity politics and cultural and political geography.
July Crisis
A diplomatic crisis among the major powers of Europe in the summer of 1914 that led to World War I. Immediately after Gavrilo Princip, a Yugoslav nationalist, assassinated Archduke Franz Ferdinand, heir presumptive to the Austro-Hungarian throne, in Sarajevo, a series of diplomatic maneuverings led to an ultimatum from Austria-Hungary to the Kingdom of Serbia and eventually to war.
Young Bosnia
A revolutionary movement active in the Condominium of Bosnia and Herzegovina before World War I. The members were predominantly school students, primarily Serbs but also Bosniaks and Croats. There were two key ideologies promoted among the members of the group: the Yugoslavist (unification into a Yugoslavia) and the Pan-Serb (unification into Serbia).

Franz Ferdinand was an Archduke of Austria-Este, Austro-Hungarian and Royal Prince of Hungary and of Bohemia and, from 1896 until his death, heir presumptive to the Austro-Hungarian throne. His assassination in Sarajevo precipitated Austria-Hungary’s declaration of war against Serbia. This caused the Central Powers (including Germany and Austria-Hungary) and Serbia’s allies to declare war on each other, starting World War I.

Franz Ferdinand was born in Graz, Austria, the eldest son of Archduke Karl Ludwig of Austria (younger brother of Franz Joseph and Maximilian) and his second wife, Princess Maria Annunciata of Bourbon-Two Sicilies. In 1875, when he was only 11 years old, his cousin Duke Francis V of Modena died, naming Franz Ferdinand his heir on condition that he add the name Este to his own. Franz Ferdinand thus became one of the wealthiest men in Austria.

In 1889, Franz Ferdinand’s life changed dramatically. His cousin Crown Prince Rudolf committed suicide at his hunting lodge in Mayerling. This left Franz Ferdinand’s father, Karl Ludwig, first in line to the throne. Ludwig died of typhoid fever in 1896. Henceforth, Franz Ferdinand was groomed to succeed him.

The assassination of Archduke Franz Ferdinand of Austria, heir presumptive to the Austro-Hungarian throne, and his wife Sophie, Duchess of Hohenberg, occurred on June 28, 1914, in Sarajevo when they were shot dead by Gavrilo Princip. Princip was one of a group of six assassins (five Serbs and one Bosniak) coordinated by Danilo Ilić, a Bosnian Serb and a member of the Black Hand secret society. The political objective of the assassination was to break off Austria-Hungary’s South Slav provinces so they could be combined into Yugoslavia. The Black Hand, formally Unification or Death, was a secret military society formed on May 9, 1911, by officers in the Army of the Kingdom of Serbia. with the aim of uniting all of the territories with a South Slavic majority not ruled by either Serbia or Montenegro. Its inspiration was primarily the unification of Italy in 1859–70, but also that of Germany in 1871.

The assassins’ motives were consistent with Young Bosnia, a revolutionary movement active in the Condominium of Bosnia and Herzegovina (ruled by Austria-Hungary) before World War I. The members were predominantly school students, primarily Serbs but also Bosniaks and Croats. There were two key ideologies promoted among the members of the group: the Yugoslavist (unification into a Yugoslavia), and the Pan-Serb (unification into Serbia). Young Bosnia was inspired from a variety of ideas, movements, and events, such as German romanticism, anarchism, Russian revolutionary socialism, Fyodor Dostoyevsky, Friedrich Nietzsche, and the Battle of Kosovo.

In 1913, Emperor Franz Joseph commanded Archduke Franz Ferdinand to observe the military maneuvers in Bosnia scheduled for June 1914. Following the maneuvers, Ferdinand and his wife planned to visit Sarajevo to open the state museum in its new premises there. Duchess Sophie, according to their oldest son, Duke Maximilian, accompanied her husband out of fear for his safety.

Franz Ferdinand was an advocate of increased federalism and widely believed to favor trialism, under which Austria-Hungary would be reorganized by combining the Slavic lands within the Austro-Hungarian empire into a third crown. A Slavic kingdom could have been a bulwark against Serb irredentism, and Ferdinand was therefore perceived as a threat by those same irredentists. Princip later stated to the court that preventing Ferdinand’s planned reforms was one of his motivations.

The day of the assassination, June 28, is the feast of St. Vitus. In Serbia, it is called Vidovdan and commemorates the 1389 Battle of Kosovo against the Ottomans, at which the Sultan was assassinated in his tent by a Serb.

The assassination of Ferdinand led directly to the First World War when Austria-Hungary subsequently issued an ultimatum to the Kingdom of Serbia, which was partially rejected. Austria-Hungary then declared war.

The assassins, the key members of the clandestine network, and the key Serbian military conspirators who were still alive were arrested, tried, convicted, and punished. Those who were arrested in Bosnia were tried in Sarajevo in October 1914. The other conspirators were arrested and tried before a Serbian court on the French-controlled Salonika Front in 1916–1917 on unrelated false charges; Serbia executed three of the top military conspirators. Much of what is known about the assassinations comes from these two trials and related records. 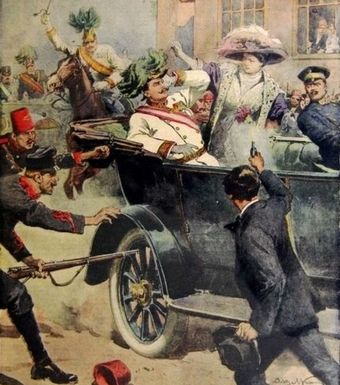 Assassination of Archduke Ferdinand: The first page of the edition of the Domenica del Corriere, an Italian paper, with a drawing by Achille Beltrame depicting Gavrilo Princip killing Archduke Franz Ferdinand of Austria in Sarajevo.

The murder of the heir to the Austro-Hungarian Empire and his wife produced widespread shock across Europe, and there was initially much sympathy for the Austrian position. Within two days of the assassination, Austria-Hungary and Germany advised Serbia that it should open an investigation, but Secretary General to the Serbian Ministry of Foreign Affairs Slavko Gruic, replied “Nothing had been done so far and the matter did not concern the Serbian Government.” An angry exchange followed between the Austrian Chargé d’Affaires at Belgrade and Gruic.

After conducting a criminal investigation, verifying that Germany would honor its military alliance, and persuading the skeptical Hungarian Count Tisza, Austria-Hungary issued a formal letter to the government of Serbia. The letter reminded Serbia of its commitment to respect the Great Powers’ decision regarding Bosnia-Herzegovina and maintain good relations with Austria-Hungary. The letter contained specific demands aimed at preventing the publication of propaganda advocating the violent destruction of Austria-Hungary, removing the people behind this propaganda from the Serbian Military, arresting the people on Serbian soil who were involved in the assassination plot, and preventing the clandestine shipment of arms and explosives from Serbia to Austria-Hungary.

This letter became known as the July Ultimatum, and Austria-Hungary stated that if Serbia did not accept all of the demands in total within 48 hours, it would recall its ambassador from Serbia. After receiving a telegram of support from Russia, Serbia mobilized its army and responded to the letter by completely accepting point #8 demanding an end to the smuggling of weapons and punishment of the frontier officers who had assisted the assassins, and completely accepting point #10 which demanded Serbia report the execution of the required measures as they were completed. Serbia partially accepted, finessed, disingenuously answered, or politely rejected elements of the preamble and enumerated demands #1–7 and #9. The shortcomings of Serbia’s response were published by Austria-Hungary. Austria-Hungary responded by breaking diplomatic relations. This diplomatic crisis is known as the July Crisis.

The next day, Serbian reservists transported on tramp steamers on the Danube crossed onto the Austro-Hungarian side of the river at Temes-Kubin and Austro-Hungarian soldiers fired into the air to warn them off. The report of this incident was initially sketchy and reported to Emperor Franz-Joseph as “a considerable skirmish.” Austria-Hungary then declared war and mobilized the portion of its army that would face the (already mobilized) Serbian Army on July 28, 1914. Under the Secret Treaty of 1892 Russia and France were obliged to mobilize their armies if any of the Triple Alliance mobilized. Russia’s mobilization set off full Austro-Hungarian and German mobilizations. Soon all the Great Powers except Italy had chosen sides and gone to war. 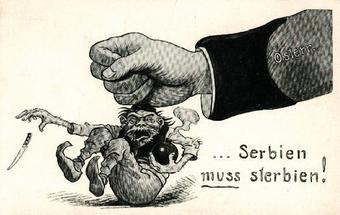