The continuing collapse of the Ottoman Empire coincided with the rise of nationalism in the Balkans, which led to increased tensions and conflicts in the region. This “powder keg” was thus a major catalyst for the outbreak of World War I.

irredentism
Any political or popular movement intended to reclaim and reoccupy a “lost” or “unredeemed” area; territorial claims are justified on the basis of real or imagined national and historic (an area formerly part of that state) or ethnic (an area inhabited by that nation or ethnic group) affiliations. It is often advocated by nationalist and pan-nationalist movements and has been a feature of identity politics and cultural and political geography.
Balkans
A peninsula and a cultural area in Southeastern Europe with various and disputed borders. The region takes its name from the Balkan Mountains that stretch from the Serbia-Bulgaria border to the Black Sea. Conflicts here were a major contributing factor to the outbreak of WWI.
Pan-Slavism
A movement which crystallized in the mid-19th century concerned with the advancement of integrity and unity for the Slavic people. Its main impact occurred in the Balkans, where non-Slavic empires—the Byzantine Empire, Austria-Hungary, the Ottoman Empire, and Venice—had ruled the South Slavs for centuries.

The “Balkan powder keg,” also termed the “powder keg of Europe,” refers to the Balkans in the early part of the 20th century preceding World War I. There were a number of overlapping claims to territories and spheres of influence between the major European powers, such as the Russian Empire, the Austro-Hungarian Empire, the German Empire and, to a lesser degree, the Ottoman Empire, the United Kingdom, and Kingdom of Italy.

In addition to the imperialistic ambitions and interests in this region, there was a growth in nationalism among the indigenous peoples, leading to the formation of the independent states of Greece, Serbia, Montenegro, Bulgaria, Romania, and Albania.

Within these nations, there were movements to create “greater” nations: to enlarge the boundaries of the state beyond those areas where the national ethnic group was in the majority (termed irredentism). This led to conflict between the newly independent nations and the empire from which they split, the Ottoman Empire. Additionally, it led to differences between the Balkan nations who wished to gain territory at the expense of their neighbors. Both the conflict with the Ottoman Empire and between the Balkan nations led to the Balkan Wars, discussed below.

In a different vein, the ideology of Pan-Slavism in Balkans gained popularity; the movement built around it in the region sought to unite all of the Slavs of the Balkans into one nation, Yugoslavia. This, however, would require the union of several Balkan states and territory that was part of Austria-Hungary. For this reason, Pan-Slavism was strongly opposed by Austria-Hungary, while it was supported by Russia which viewed itself as leader of all Slavic nations.

To complicate matters, in the years preceding World War I, there existed a tangle of Great Power alliances, both formal and informal, public and secret. Following the Napoleonic Wars, there existed a “balance of power” to prevent major wars. This theory held that opposing combinations of powers in Europe would be evenly matched, entailing that any general war would be far too costly to risk entering. This system began to fall apart as the Ottoman Empire, seen as a check on Russian power, began to crumble, and as Germany, a loose confederation of minor states, was united into a major power. Not only did these changes lead to a realignment of power, but of interests as well.

All these factors and many others conspired to bring about the First World War. As is insinuated by the name “the powder keg of Europe,” the Balkans were not the major issue at stake in the war, but were the catalyst that led to the conflagration. The Chancellor of Germany in the late 19th century, Otto von Bismarck, correctly predicted it would be the source of major conflict in Europe.

The powder keg “exploded” causing the First World War, which began with a conflict between imperial Austria-Hungary and Pan-Slavic Serbia. 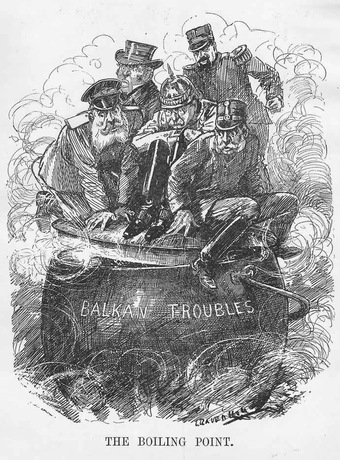 Balkan Troubles: Germany, France, Russia, Austria-Hungary, and Britain attempting to keep the lid on the simmering cauldron of imperialist and nationalist tensions in the Balkans to prevent a general European war. They were successful in 1912 and 1913 but did not succeed in 1914, resulting in the outbreak of World War I.

The continuing collapse of the Ottoman Empire led to two wars in the Balkans, in 1912 and 1913, which was a prelude to world war. By 1900 nation states had formed in Bulgaria, Greece, Montenegro and Serbia. Nevertheless, many of their ethnic compatriots lived under the control of the Ottoman Empire. In 1912, these countries formed the Balkan League. There were three main causes of the First Balkan War. The Ottoman Empire was unable to reform itself, govern satisfactorily, or deal with the rising ethnic nationalism of its diverse peoples. Secondly, the Great Powers quarreled among themselves and failed to ensure that the Ottomans would carry out the needed reforms. This led the Balkan states to impose their own solution. Most importantly, the members of the Balkan League were confident that it could defeat the Turks, which would prove to be the case.

The First Balkan War broke out when the League attacked the Ottoman Empire on October 8, 1912, and was ended seven months later by the Treaty of London. After five centuries, the Ottoman Empire lost virtually all of its possessions in the Balkans. The Treaty had been imposed by the Great Powers, dissatisfying the victorious Balkan states. Bulgaria was dissatisfied over the division of the spoils in Macedonia, made in secret by its former allies, Serbia and Greece, and attacked to force them out of Macedonia, starting the Second Balkan War. The Serbian and Greek armies repulsed the Bulgarian offensive and counter-attacked into Bulgaria, while Romania and the Ottoman Empire also attacked Bulgaria and gained (or regained) territory. In the resulting Treaty of Bucharest, Bulgaria lost most of the territories it had gained in the First Balkan War.

The long-term result was heightened tension in the Balkans. Relations between Austria and Serbia became increasingly bitter. Russia felt humiliated after Austria and Germany prevented it from helping Serbia. Bulgaria and Turkey were also dissatisfied, and eventually joined Austria and Germany in the First World War.