During the 1870s and 1880s, all major powers were preparing for a large-scale war by increasing the sizes of their armies and navies. This led to increased political tensions that many historians consider a major factor in the outbreak of World War I.

Assess the rise of militarism in the years preceding WWI

militarism
The belief or the desire of a government or people that a country should maintain a strong military capability and be prepared to use it aggressively to defend or promote national interests. It may also imply the glorification of the military, the ideals of a professional military class, and the “predominance of the armed forces in the administration or policy of the state.”
conscription
The compulsory enlistment of people in a national service, most often military service. The practice dates back to antiquity and continues in some countries to the present day under various names. The modern system dates to the French Revolution in the 1790s, where it became the basis of a very large and powerful military. Most European nations later copied the system in peacetime so that men at a certain age would serve one to eight years on active duty and then transfer to the reserve force.
jingoism
A form of nationalism characterized by aggressive foreign policy. It refers to a country’s advocacy for the use of threats or actual force as opposed to peaceful relations to safeguard what it perceives as its national interests.

Rise of Militarism Prior to World War I

The main causes of World War I, which broke out unexpectedly in central Europe in summer 1914, comprised all the conflicts and hostility of the four decades leading up to the war. Militarism, alliances, imperialism, and ethnic nationalism played major roles.

During the 1870s and 1880s, all major world powers were preparing for a large-scale war, although none expected one. Britain focused on building up its Royal Navy, already stronger than the next two navies combined. Germany, France, Austria, Italy, Russia, and some smaller countries set up conscription systems whereby young men would serve from one to three years in the army, then spend the next 20 years or so in the reserves with annual summer training. Men from higher social classes became officers. Each country devised a mobilization system so the reserves could be called up quickly and sent to key points by rail. Every year the plans were updated and expanded in terms of complexity. Each country stockpiled arms and supplies for an army that ran into the millions.

Germany in 1874 had a regular professional army of 420,000 with an additional 1.3 million reserves. By 1897 the regular army was 545,000 strong and the reserves 3.4 million. The French in 1897 had 3.4 million reservists, Austria 2.6 million, and Russia 4.0 million. The various national war plans had been perfected by 1914, albeit with Russia and Austria trailing in effectiveness. Recent wars (since 1865) had typically been short—a matter of months. All the war plans called for a decisive opening and assumed victory would come after a short war; no one planned for or was ready for the food and munitions needs of a long stalemate as actually happened in 1914–18.

As David Stevenson has put it, “A self-reinforcing cycle of heightened military preparedness … was an essential element in the conjuncture that led to disaster … The armaments race … was a necessary precondition for the outbreak of hostilities.” If Archduke Franz Ferdinand had been assassinated in 1904 or even in 1911, Herrmann speculates, there might have been no war. It was “… the armaments race … and the speculation about imminent or preventive wars” that made his death in 1914 the trigger for war.

This increase in militarism coincided with the rise of jingoism, a term for nationalism in the form of aggressive foreign policy. Jingoism also refers to a country’s advocacy for the use of threats or actual force, as opposed to peaceful relations, to safeguard what it perceives as its national interests. Colloquially, it refers to excessive bias in judging one’s own country as superior to others—an extreme type of nationalism. The term originated in reference to the United Kingdom’s pugnacious attitude toward Russia in the 1870s, and appeared in the American press by 1893.

Probably the first uses of the term in the U.S. press occurred in connection with the proposed annexation of Hawaii in 1893. A coup led by foreign residents, mostly Americans, and assisted by the U.S. Minister in Hawaii, overthrew the Hawaiian constitutional monarchy and declared a Republic. Republican president Benjamin Harrison and Republicans in the Senate were frequently accused of jingoism in the Democratic press for supporting annexation.

The term was also used in connection with the foreign policy of Theodore Roosevelt. In an October 1895 New York Times article, Roosevelt stated, “There is much talk about ‘jingoism’. If by ‘jingoism’ they mean a policy in pursuance of which Americans will with resolution and common sense insist upon our rights being respected by foreign powers, then we are ‘jingoes’.”

One of the aims of the First Hague Conference of 1899, held at the suggestion of Emperor Nicholas II, was to discuss disarmament. The Second Hague Conference was held in 1907. All signatories except for Germany supported disarmament. Germany also did not want to agree to binding arbitration and mediation. The Kaiser was concerned that the United States would propose disarmament measures, which he opposed. All parties tried to revise international law to their own advantage.

Historians have debated the role of the German naval build-up as the principal cause of deteriorating Anglo-German relations. In any case, Germany never came close to catching up with Britain.

Supported by Wilhelm II’s enthusiasm for an expanded German navy, Grand Admiral Alfred von Tirpitz championed four Fleet Acts from 1898 to 1912, and from 1902 to 1910, the Royal Navy embarked on its own massive expansion to keep ahead of the Germans. This competition came to focus on the revolutionary new ships based on the Dreadnought, launched in 1906, awhich gave Britain a battleship that far outclassed any other in Europe.

The overwhelming British response proved to Germany that its efforts were unlikely to equal those of the Royal Navy. In 1900, the British had a 3.7:1 tonnage advantage over Germany; in 1910 the ratio was 2.3:1 and in 1914, 2.1:1. Ferguson argues that, “So decisive was the British victory in the naval arms race that it is hard to regard it as in any meaningful sense a cause of the First World War.” This ignores the fact that the Kaiserliche Marine had narrowed the gap by nearly half, and that the Royal Navy had long intended to be stronger than any two potential opponents; the United States Navy was in a period of growth, making the German gains very ominous.

In Britain in 1913, there was intense internal debate about new ships due to the growing influence of John Fisher’s ideas and increasing financial constraints. In early to mid-1914 Germany adopted a policy of building submarines instead of new dreadnoughts and destroyers, effectively abandoning the race, but kept this new policy secret to delay other powers following suit.

The Germans abandoned the naval race before the war broke out. The extent to which the naval race was one of the chief factors in Britain’s decision to join the Triple Entente remains a key controversy. Historians such as Christopher Clark believe it was not significant, with Margaret Moran taking the opposite view 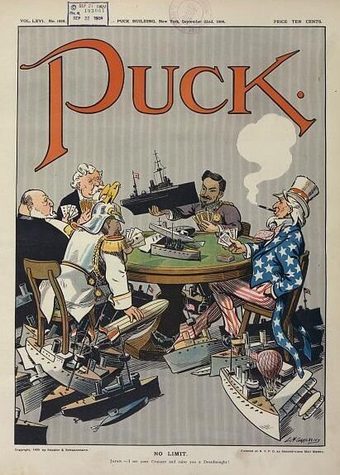