The Coming of War

The “Eastern Question” refers to the strategic competition and political considerations of the European Great Powers in light of the political and economic instability of the Ottoman Empire, named the “Sick Man of Europe.”

Concert of Europe
Also known as the Congress System or the Vienna System after the Congress of Vienna, a system of dispute resolution adopted by the major conservative powers of Europe to maintain their power, oppose revolutionary movements, weaken the forces of nationalism, and uphold the balance of power. It is suggested that it operated in Europe from the end of the Napoleonic Wars (1815) to the early 1820s, while some see it as lasting until the outbreak of the Crimean War, 1853-1856.
sick man of Europe
A label given to a European country experiencing a time of economic difficulty or impoverishment. The term was first used in the mid-19th century to describe the Ottoman Empire, but has since been applied at one time or another to nearly every other major country in Europe.
Eastern Question
In diplomatic history, this refers to the strategic competition and political considerations of the European Great Powers in light of the political and economic instability in the Ottoman Empire from the late 18th to early 20th centuries.

In diplomatic history, the “Eastern Question” refers to the strategic competition and political considerations of the European Great Powers in light of the political and economic instability in the Ottoman Empire from the late 18th to early 20th centuries. Characterized as the “sick man of Europe,” the relative weakening of the empire’s military strength in the second half of the 18th century threatened to undermine the fragile balance of power system largely shaped by the Concert of Europe. The Eastern Question encompassed myriad interrelated elements: Ottoman military defeats, Ottoman institutional insolvency, the ongoing Ottoman political and economic modernization programs, the rise of ethno-religious nationalism in its provinces, and Great Power rivalries.

The Eastern Question is normally dated to 1774, when the Russo-Turkish War (1768–74) ended in defeat for the Ottomans. As the dissolution of the Ottoman Empire was believed to be imminent, the European powers engaged in a power struggle to safeguard their military, strategic, and commercial interests in the Ottoman domains. Imperial Russia stood to benefit from the decline of the Ottoman Empire; on the other hand, Austria-Hungary and Great Britain deemed the preservation of the Empire to be in their best interests. The Eastern Question was put to rest after World War I, one of the outcomes of which was the collapse and division of the Ottoman holdings.

A book by Harold Temperley quotes Nicholas I of Russia as saying in 1853, “Turkey seems to be falling to pieces, the fall will be a great misfortune. It is very important that England and Russia should come to a perfectly good understanding… and that neither should take any decisive step of which the other is not apprized…We have a sick man on our hands, a man gravely ill, it will be a great misfortune if one of these days he slips through our hands, especially before the necessary arrangements are made.”

In the 1870s the “Eastern Question” focused on the mistreatment of Christians in the Balkans by the Ottoman Empire and what the European great powers ought to do about it.

In 1876 Serbia and Montenegro declared war on Turkey and were badly defeated, notably at the battle of Alexinatz (Sept. 1, 1876). Gladstone published an angry pamphlet on “The Bulgarian Horrors and the Question of the East,” which aroused enormous agitation in Britain against Turkish misrule and complicated the Disraeli government’s policy of supporting Turkey against Russia. Russia, which supported Serbia, threatened war against Turkey. In August 1877, Russia declared war on Turkey and steadily defeated its armies. In early January 1878 Turkey asked for an armistice, but the British fleet arrived at Constantinople too late. Russia and Turkey on March 3 signed the Treaty of San Stefano, which was highly advantageous to Russia, Serbia, and Montenegro as well as Romania and Bulgaria.

Britain, France, and Austria opposed the Treaty of San Stefano because it gave Russia too much influence in the Balkans, where insurrections were frequent. War threatened. After numerous attempts, a grand diplomatic settlement was reached at the Congress of Berlin (June–July 1878). The new Treaty of Berlin revised the earlier treaty. Germany’s Otto von Bismarck (1815–98) presided over the congress and brokered the compromises. One result was that Austria took control of the provinces of Bosnia and Herzegovina, intending to eventually merge them into the Austro-Hungarian Empire. When they finally tried to do that in 1914, local Serbs assassinated Austria’s Archduke and the result was the First World War. 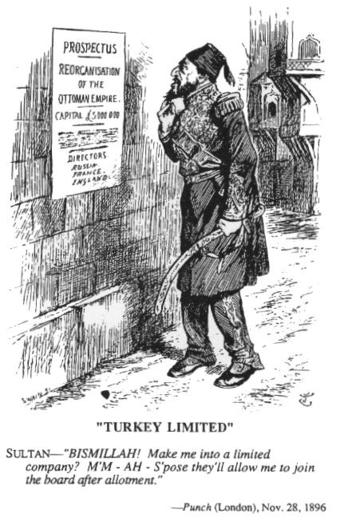 “Sick Man of Europe”: Caricature from Punch magazine dated November 28, 1896. It shows Sultan Abdul Hamid II in front of a poster that announces the reorganization of the Ottoman Empire. The empire’s value is estimated at 5 million pounds. Russia, France, and England are listed as the directors of the reorganization. The caricature refers to the Ottoman Empire, which was increasingly falling under the financial control of the European powers and had lost territory.

Ottoman Decline Up to World War I

Beginning from the late 18th century, the Ottoman Empire faced challenges defending itself against foreign invasion and occupation. In response to foreign threats, the empire initiated a period of tremendous internal reform that came to be known as the Tanzimat, which succeeded in significantly strengthening the Ottoman central state despite the empire’s precarious international position. Over the course of the 19th century, the Ottoman state became increasingly powerful and rationalized, exercising a greater degree of influence over its population than in any previous era.

As the Ottoman state attempted to modernize its infrastructure and army in response to threats from the outside, it also opened itself up to a different kind of threat: that of creditors. Indeed, as the historian Eugene Rogan has written, “the single greatest threat to the independence of the Middle East” in the 19th century “was not the armies of Europe but its banks.” The Ottoman state, which had begun taking on debt with the Crimean War, was forced to declare bankruptcy in 1875. By 1881, the Ottoman Empire agreed to have its debt controlled by an institution known as the Ottoman Public Debt Administration, a council of European men with presidency alternating between France and Britain. The body controlled swaths of the Ottoman economy and used its position to insure that European capital continued to penetrate the empire, often to the detriment of local Ottoman interests.

Instead, this period became the story of the twilight struggle of the Empire. A proliferation of conflicting political parties created discord and confusion. Profiting from the civil strife, Austria-Hungary officially annexed Bosnia and Herzegovina in 1908. Ottoman military reforms resulted in a modern army which engaged in the Italo-Turkish War (1911) that ended in the loss of the North African territories and the Dodecanese, the Balkan Wars (1912–1913) that ended in the loss of almost all of the Empire’s European territories. In addition, the Empire faced continuous civil and political unrest with several military coups leading up to World War I.