World fairs during the late 19th century and early 20th centuries showcased the technological, industrial, and cultural achievements of nations around the world, sometimes displaying cultural superiority over colonized nations through human exhibits.

The Great Exhibition
An international exhibition that took place in Hyde Park, London, from May 1 to October 11, 1851. It was the first in a series of world fairs, exhibitions of culture and industry that became popular in the 19th century, and was a much anticipated event. It was organized by Henry Cole and Prince Albert, husband of the reigning monarch Queen Victoria. It was attended by numerous notable figures of the time, including Charles Darwin, Samuel Colt, members of the Orléanist Royal Family, and the writers Charlotte Brontë, Charles Dickens, Lewis Carroll, George Eliot, and Alfred Tennyson.
human zoos
Public exhibitions of humans, usually in a so-called natural or primitive state. The displays often emphasized the cultural differences between Europeans of Western civilization and non-European peoples or other Europeans with a lifestyle deemed primitive. Some placed indigenous Africans in a continuum somewhere between the great apes and the white man.

A world’s fair, world fair, world exposition, or universal exposition (sometimes expo for short), is a large international exhibition designed to showcase achievements of nations. These exhibitions vary in character and are held in various parts of the world.

The best-known “first World Expo” was held in The Crystal Palace in Hyde Park, London, United Kingdom, in 1851, under the title “Great Exhibition of the Works of Industry of All Nations.” The Great Exhibition, as it is often called, was an idea of Prince Albert, Queen Victoria’s husband, and is usually considered to be the first international exhibition of manufactured products. It was arguably a response to the highly successful French Industrial Exposition of 1844; indeed, its prime motive was for Britain to display itself as an industrial leader. It influenced the development of several aspects of society, including art-and-design education, international trade and relations, and tourism. This expo was the most obvious precedent for the many international exhibitions considered world fairs.

Since their inception in 1851, the character of world expositions has evolved. Three eras can be distinguished: industrialization, cultural exchange, and nation branding.

The first era could be called the era of “industrialization” and covered roughly the period from 1800 to 1938. In these days, world expositions were especially focused on trade and were famous for the display of technological inventions and advancements. World expositions were the platforms where the state-of-the-art in science and technology from around the world were brought together. The world expositions of 1851 London, 1853 New York, 1862 London, 1876 Philadelphia, 1889 Paris, 1893 Chicago, 1897 Brussels, 1900 Paris, 1901 Buffalo, 1904 St. Louis, 1915 San Francisco, and 1933–34 Chicago were landmarks in this respect. Inventions such as the telephone were first presented during this era.

The 1939–40 New York World’s Fair diverged from the original focus of the world fair expositions. From then on, world fairs adopted specific cultural themes forecasting a better future for society. Technological innovations were no longer the primary exhibits at fairs.

From Expo ’88 in Brisbane onward, countries such as Finland, Japan, Canada, France, and Spain started to use world expositions as platforms to improve their national images.

Human zoos, also called ethnological expositions, were 19th-, 20th-, and 21st-century public exhibitions of humans, usually in a so-called natural or primitive state. The displays often emphasized the cultural differences between Europeans of Western civilization and non-European peoples or other Europeans with a lifestyle deemed primitive. Some of them placed indigenous Africans in a continuum somewhere between the great apes and the white man. Ethnological expositions have since been criticized as highly degrading and racist.

The notion of human curiosity and exhibition has a history at least as long as colonialism. In the 1870s, exhibitions of exotic populations became popular in various countries. Human zoos could be found in Paris, Hamburg, Antwerp, Barcelona, London, Milan, and New York City. Carl Hagenbeck, a merchant in wild animals and future entrepreneur of many European zoos, decided in 1874 to exhibit Samoan and Sami people as “purely natural” populations. In 1876, he sent a collaborator to the Egyptian Sudan to bring back some wild beasts and Nubians. The Nubian exhibit was very successful in Europe and toured Paris, London, and Berlin.

Both the 1878 and the 1889 Parisian World’s Fair presented a Negro Village (village nègre). Visited by 28 million people, the 1889 World’s Fair displayed 400 indigenous people as the major attraction. The 1900 World’s Fair presented the famous diorama living in Madagascar, while the Colonial Exhibitions in Marseilles (1906 and 1922) and in Paris (1907 and 1931) also displayed humans in cages, often nude or semi-nude. The 1931 exhibition in Paris was so successful that 34 million people attended it in six months, while a smaller counter-exhibition entitled The Truth on the Colonies, organized by the Communist Party, attracted very few visitors—in the first room, it recalled Albert Londres and André Gide’s critiques of forced labor in the colonies. Nomadic Senegalese Villages were also presented.

In 1904, Apaches and Igorots (from the Philippines) were displayed at the Saint Louis World Fair in association with the 1904 Summer Olympics. The U.S. had just acquired, following the Spanish–American War, new territories such as Guam, the Philippines, and Puerto Rico, allowing them to “display” some of the native inhabitants. According to the Rev. Sequoyah Ade:

To further illustrate the indignities heaped upon the Philippine people following their eventual loss to the Americans, the United States made the Philippine campaign the centrepoint of the 1904 World’s Fair held that year in St. Louis, MI [sic]. In what was enthusiastically termed a “parade of evolutionary progress,” visitors could inspect the “primitives” that represented the counterbalance to “Civilisation” justifying Kipling’s poem “The White Man’s Burden.” Pygmies from New Guinea and Africa, who were later displayed in the Primate section of the Bronx Zoo, were paraded next to American Indians such as Apache warrior Geronimo, who sold his autograph. But the main draw was the Philippine exhibition complete with full size replicas of Indigenous living quarters erected to exhibit the inherent backwardness of the Philippine people. The purpose was to highlight both the “civilising” influence of American rule and the economic potential of the island chains’ natural resources on the heels of the Philippine–American War. It was, reportedly, the largest specific Aboriginal exhibition displayed in the exposition. As one pleased visitor commented, the human zoo exhibition displayed “the race narrative of odd peoples who mark time while the world advances, and of savages made, by American methods, into civilized workers.” 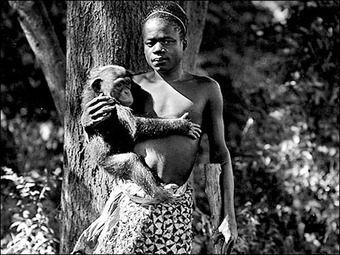