Some 75 million people died in World War II, including about 20 million military personnel and 40 million civilians, many of whom died because of deliberate genocide, massacres, mass-bombings, disease, and starvation.

Assess the losses and damages of World War II

“unworthy of life”
In German, “Lebensunwertes Leben,” this term was a Nazi designation for the segments of the populace which, according to the Nazi regime of the time, had no right to live.
Executive Order 9066
A United States presidential executive order signed and issued during World War II by the United States President Franklin D. Roosevelt on February 19, 1942, authorizing the Secretary of War to prescribe certain areas as military zones, clearing the way for the deportation of Japanese Americans and Italian-Americans to internment camps.
gulag
The government agency that administered the main Soviet forced labour camp systems during the Stalin era, from the 1930s until the 1950s.

Estimates for the total number of casualties in the war vary because many deaths went unrecorded. Most suggest that some 75 million people died in the war, including about 20 million military personnel and 40 million civilians. Many civilians died because of deliberate genocide, massacres, mass-bombings, disease, and starvation.

The Soviet Union lost around 27 million people during the war, including 8.7 million military and 19 million civilian deaths. The largest portion of military dead were 5.7 million ethnic Russians, followed by 1.3 million ethnic Ukrainians. A quarter of the people in the Soviet Union were wounded or killed. Germany sustained 5.3 million military losses, mostly on the Eastern Front and during the final battles in Germany.

Of the total number of deaths in World War II, approximately 85 percent—mostly Soviet and Chinese—were on the Allied side and 15 percent on the Axis side. Many deaths were caused by war crimes committed by German and Japanese forces in occupied territories. An estimated 11 to 17 million civilians died either as a direct or as an indirect result of Nazi ideological policies, including the systematic genocide of around 6 million Jews during the Holocaust and an additional 5 to 6 million ethnic Poles and other Slavs (including Ukrainians and Belarusians), Roma, homosexuals, and other ethnic and minority groups. Hundreds of thousands of ethnic Serbs, along with gypsies and Jews, were murdered by the Axis-aligned Croatian Ustaše in Yugoslavia, and retribution-related killings were committed just after the war ended.

In Asia and the Pacific, between 3 million and more than 10 million civilians, mostly Chinese (estimated at 7.5 million), were killed by the Japanese occupation forces. The best-known Japanese atrocity was the Nanking Massacre, in which 50 to 300 thousand Chinese civilians were raped and murdered. Mitsuyoshi Himeta reported that 2.7 million casualties occurred during the Sankō Sakusen. General Yasuji Okamura implemented the policy in Heipei and Shantung.

Axis forces employed biological and chemical weapons. The Imperial Japanese Army used a variety of such weapons during its invasion and occupation of China and in early conflicts against the Soviets. Both the Germans and Japanese tested such weapons against civilians and sometimes on prisoners of war.

The Soviet Union was responsible for the Katyn massacre of 22,000 Polish officers and the imprisonment or execution of thousands of political prisoners by the NKVD in the Baltic states and eastern Poland annexed by the Red Army.

The mass-bombing of civilian areas, notably the cities of Warsaw, Rotterdam and London, included the aerial targeting of hospitals and fleeing refugees by the German Luftwaffe, along with the bombings of Tokyo and the German cities of Dresden, Hamburg, and Cologne by the Western Allies. These bombings may be considered war crimes. The latter resulted in the destruction of more than 160 cities and the death of more than 600,000 German civilians. However, no positive or specific customary international humanitarian law with respect to aerial warfare existed before or during World War II. 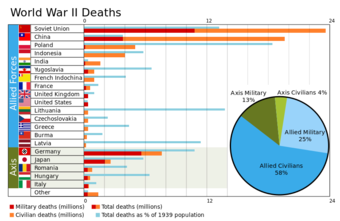 The German government led by Adolf Hitler and the Nazi Party was responsible for the Holocaust, the killing of approximately 6 million Jews, 2.7 million ethnic Poles, and 4 million others who were deemed “unworthy of life” (including the disabled and mentally ill, Soviet prisoners of war, homosexuals, Freemasons, Jehovah’s Witnesses, and Romani) as part of a program of deliberate extermination. About 12 million, mostly Eastern Europeans, were employed in the German war economy as forced laborers.

In addition to Nazi concentration camps, the Soviet gulags (labor camps) led to the death of citizens of occupied countries such as Poland, Lithuania, Latvia, and Estonia, as well as German prisoners of war (POWs) and Soviet citizens who were thought to be Nazi supporters. Of the 5.7 million Soviet POWs of the Germans, 57 percent died or were killed during the war, a total of 3.6 million. Soviet ex-POWs and repatriated civilians were treated with great suspicion as potential Nazi collaborators, and some were sent to the Gulag upon being checked by the NKVD.

Japanese POW camps, many of which were used as labor camps, also had high death rates. The International Military Tribunal for the Far East found the death rate of Western prisoners was 27.1 percent (for American POWs, 37 percent), seven times that of POWs under the Germans and Italians. While 37,583 prisoners from the UK, 28,500 from the Netherlands, and 14,473 from the United States were released after the surrender of Japan, the number of Chinese released was only 56.

According to historian Zhifen Ju, at least five million Chinese civilians from northern China and Manchukuo were enslaved between 1935 and 1941 by the East Asia Development Board, or Kōain, for work in mines and war industries. After 1942, the number reached 10 million. The US Library of Congress estimates that in Java, between 4 and 10 million rōmusha (Japanese: “manual laborers”), were forced to work by the Japanese military. About 270,000 of these Javanese laborers were sent to other Japanese-held areas in South East Asia, and only 52,000 were repatriated to Java.

On February 19, 1942, Roosevelt signed Executive Order 9066, interning about 100,000 Japanese living on the West Coast. Canada had a similar program. In addition, 14,000 German and Italian citizens who had been assessed as being security risks were also interned.

In accordance with the Allied agreement made at the Yalta Conference, millions of POWs and civilians were used as forced labor by the Soviet Union. Hungarians were forced to work for the Soviet Union until 1955. 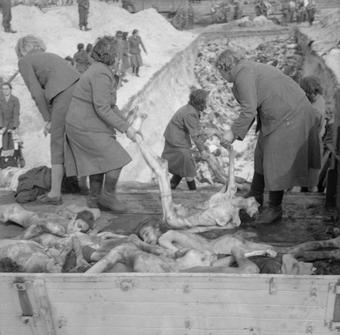 The Liberation of Bergen-Belsen Concentration: SS female camp guards remove prisoners’ bodies from lorries and carry them to a mass grave, inside the German Bergen-Belsen concentration camp, 1945