The unconditional surrender of Germany on May 8, 1945, and Japan on September 2, 1945, brought World War II to an end. Various documents and treaties placed stringent terms on Axis powers to prevent future hostilities.

Describe the terms under which Germany, Japan, and Italy surrendered

Paris Peace Treaties
A series of document wherein victorious wartime Allied powers negotiated the details of peace treaties with minor Axis powers, namely Italy (though it was considered a major Axis Power), Romania, Hungary, Bulgaria, and Finland, following the end of World War II in 1945.
German Instrument of Surrender
The legal document that established the unconditional surrender of Germany in World War II.
unconditional surrender
A surrender in which no guarantees are given to the surrendering party.
Potsdam Declaration
A statement that called for the surrender of all Japanese armed forces during World War II.

The German Instrument of Surrender ended World War II in Europe. The definitive text was signed in Karlshorst, Berlin on the night of May 8, 1945 by representatives of the three armed services of the Oberkommando der Wehrmacht (OKW) and the Allied Expeditionary Force together with the Supreme High Command of the Red Army, with further French and U.S. representatives signing as witnesses. An earlier version of the text was signed in a ceremony in Reims in the early hours of May 7, 1945, but the Soviets rejected that version as it underplayed their role in the defeat of Germany in Berlin. In the West, May 8 is known as Victory in Europe Day, whereas in post-Soviet states the Victory Day is celebrated on May 9 since the definitive signing occurred after midnight Moscow time.

Preparations of the text of the instrument of surrender began by representatives of the then three Allied Powers, the U.S., the Soviet Union, and the United Kingdom, at the European Advisory Commission (EAC) throughout 1944. By January 3, 1944, the Working Security Committee in the EAC proposed, “that the capitulation of Germany should be recorded in a single document of unconditional surrender.”

The agreed text was in three parts. The first consisted of a brief preamble “The German Government and German High Command, recognizing and acknowledging the complete defeat of the German armed forces on land, at sea and in the air, hereby announce Germany’s unconditional surrender.”

The instrument of surrender itself followed in fourteen articles. The second part, articles 1-5, related to the military surrender by the German High Command of all forces on land, at sea, and in the air, to the surrender of their weapons, to their evacuation from any territory outside German boundaries by December 31, 1937, and to their liability to captivity as prisoners of war. The third part, articles 6 to 12, related to the surrender by the German Government to Allied Representatives of almost all its powers and authority, the release and repatriation of prisoners and forced laborers, the cessation of radio broadcasts, the provision of intelligence and information, the non-destruction of weapons and infrastructure, the yielding of Nazi leaders for war-crime trials, and the power of Allied Representatives to issue proclamations, orders, ordinances, and instructions covering “additional political, administrative, economic, financial, military and other requirements arising from the complete defeat of Germany.” The key article in the third part was article 12, providing that the German Government and German High command would comply fully with any proclamations, orders, ordinances, and instructions of the accredited Allied Representatives; this was understood by the Allies as allowing unlimited scope to impose arrangements for the restitution and reparation of war damages. Articles 13 and 14 specified the date of surrender and the languages of the definitive texts.

The Yalta Conference in February 1945 led to a further development of the terms of surrender, as it was agreed that administration of post-war Germany would be split into four occupation zones for Britain, France, the United States, and the Soviet Union respectively. In addition, but separately, it was agreed at Yalta that an additional clause 12a would be added to the July 1944 surrender text: that the Allied Representatives “will take such steps, including the complete disarmament, demilitarisation and dismemberment of Germany as they deem requisite for future peace and security.”

In the event of the German signings of Instruments of Surrender at Reims and Berlin, the EAC text was not used; a simplified, military-only version, based largely on the wording of the partial surrender instrument of German forces in Italy signed at Caserta, was applied instead. The reasons for the change are disputed, but it may reflect awareness of reservations as to the capability of the German signatories to agree the provisions of the full text.

With the Potsdam Agreement, signed on August 12, 1945, the Allied leaders planned the new post-war German government, resettled war territory boundaries, de facto annexed a quarter of prewar Germany situated east of the Oder-Neisse line, and mandated and organized the expulsion of the millions of Germans who remained in the annexed territories and elsewhere in the east. They also ordered German demilitarization, denazification, industrial disarmament, and settlements of war reparations. 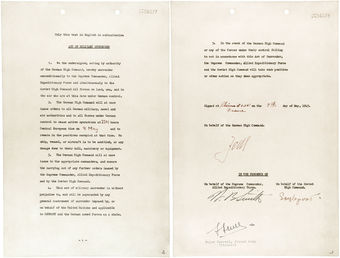 German Instrument of Surrender: The first instrument of surrender signed at Reims on May 7, 1945.

The surrender of Japan was announced by Imperial Japan on August 15 and formally signed on September 2, 1945, bringing the hostilities of World War II to a close. By the end of July 1945, the Imperial Japanese Navy was incapable of conducting major operations, and an Allied invasion of Japan was imminent. Together with the United Kingdom and China, the United States called for the unconditional surrender of the Japanese armed forces in the Potsdam Declaration on July 26, 1945—the alternative being “prompt and utter destruction.”

On August 6, 1945, at 8:15 a.m. local time, the U.S. detonated an atomic bomb over the Japanese city of Hiroshima. Sixteen hours later, American President Harry S. Truman called again for Japan’s surrender, warning them to “expect a rain of ruin from the air, the like of which has never been seen on this earth.” Late in the evening of August 8, 1945, in accordance with the Yalta agreements but in violation of the Soviet-Japanese Neutrality Pact, the Soviet Union declared war on Japan, and soon after midnight on August 9, 1945, invaded the Imperial Japanese puppet state of Manchukuo. Later in the day, the U.S. dropped a second atomic bomb, this time on the Japanese city of Nagasaki. Following these events, Emperor Hirohito intervened and ordered the Supreme Council for the Direction of the War to accept the terms the Allies had set down in the Potsdam Declaration for ending the war. After several more days of behind-the-scenes negotiations and a failed coup d’état, Emperor Hirohito gave a recorded radio address across the Empire on August 15. In the radio address, called the Jewel Voice Broadcast, he announced the surrender of Japan to the Allies.

On August 28, the occupation of Japan by the Supreme Commander for the Allied Powers began. The surrender ceremony was held on September 2 aboard the United States Navy battleship USS Missouri, at which officials from the Japanese government signed the Japanese Instrument of Surrender, thereby ending the hostilities.

The Treaty of Peace with Italy (one of the Paris Peace Treaties) was signed on February 10, 1947 between Italy and the victorious powers of World War II, formally ending hostilities. It came into general effect on September 15, 1947.

Articles 47 and 48 called for the demolition of all permanent fortifications along the Franco-Italian and Yugoslav-Italian frontier. Italy was banned from possessing, building, or experimenting with atomic weapons, guided missiles, guns with a range of over 30 km, non-contact naval mines and torpedoes as well as manned torpedoes (article 51).

Article 17 of the treaty banned Fascist organizations (“whether political, military, or semi-military”) in Italy.