The Bombing of Hiroshima and Nagasaki

31.7.6: The Bombing of Hiroshima and Nagasaki

Analyze the decision to drop the atomic bombs

Manhattan Project
A research and development project that produced the first nuclear weapons during World War II.
atomic bomb
A nuclear weapon that derives its explosive energy from nuclear fission reactions.
Operation Downfall
The code name for the Allied plan for the invasion of Japan near the end of World War II.

The United States, with the consent of the United Kingdom as laid down in the Quebec Agreement, dropped nuclear weapons on the Japanese cities of Hiroshima and Nagasaki on August 6 and 9, 1945, during the final stage of World War II. The two bombings, which killed at least 129,000 people, remain the only use of nuclear weapons for warfare in history.

In the final year of the war, the Allies prepared for what was anticipated to be a very costly invasion of the Japanese mainland. This was preceded by a U.S. firebombing campaign that destroyed 67 Japanese cities. The war in Europe concluded when Nazi Germany signed its instrument of surrender on May 8, 1945. The Japanese, facing the same fate, refused to accept the Allies’ demands for unconditional surrender and the Pacific War continued. Together with the United Kingdom and China, the United States called for the unconditional surrender of the Japanese armed forces in the Potsdam Declaration on July 26, 1945—the alternative being “prompt and utter destruction.” The Japanese responded to this ultimatum by ignoring it.

On July 16, 1945, the Allied Manhattan Project successfully detonated an atomic bomb in the New Mexico desert and by August had produced atomic weapons based on two alternate designs. The 509th Composite Group of the United States Army Air Forces (USAAF) was equipped with the specialized Silverplate version of the Boeing B-29 Superfortress, that could deliver them from Tinian in the Mariana Islands.

On August 6, the U.S. dropped a uranium gun-type atomic bomb (Little Boy) on Hiroshima. Six planes of the 509th Composite Group participated in this mission: one to carry the bomb (Enola Gay), one to take scientific measurements of the blast (The Great Artiste), the third to take photographs (Necessary Evil), while the others flew approximately an hour ahead to act as weather scouts. Bad weather would disqualify a target as the scientists insisted on visual delivery. American President Harry S. Truman called for Japan’s surrender 16 hours later, warning them to “expect a rain of ruin from the air, the like of which has never been seen on this earth.” Three days later, on August 9, the U.S. dropped a plutonium implosion-type bomb (Fat Man) on Nagasaki. Within the first two to four months of the bombings, the acute effects of the atomic bombings killed 90,000–146,000 people in Hiroshima and 39,000–80,000 in Nagasaki; roughly half of the deaths in each city occurred on the first day. During the following months, large numbers died from the effect of burns, radiation sickness, and other injuries, compounded by illness and malnutrition. In both cities, most of the dead were civilians, although Hiroshima had a sizable military garrison.

On August 15, six days after the bombing of Nagasaki and the Soviet Union’s declaration of war, Japan announced its surrender to the Allies. On September 2, it signed the instrument of surrender, effectively ending World War II. The bombings’ role in Japan’s surrender and their ethical justification are still debated. 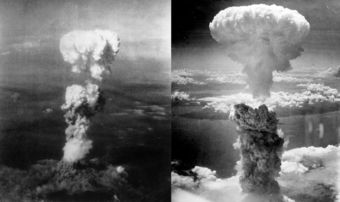 In 1945, the Pacific War between the Empire of Japan and the Allies entered its fourth year. The Japanese fought fiercely, ensuring that U.S. victory would come at an enormous cost. Of the 1.25 million battle casualties incurred by the United States in World War II, including both military personnel killed in action and wounded in action, nearly one million occurred from June 1944 to June 1945.

Even before the surrender of Nazi Germany on May 8, 1945, plans were underway for the largest operation of the Pacific War, Operation Downfall, the invasion of Japan. The operation had two parts: Operation Olympic and Operation Coronet. Set to begin in October 1945, Olympic involved a series of landings by the U.S. Sixth Army intended to capture the southern third of the southernmost main Japanese island, Kyūshū. Operation Olympic was to be followed in March 1946 by Operation Coronet, the capture of the Kantō Plain near Tokyo on the main Japanese island of Honshū by the U.S. First, Eighth, and Tenth Armies, as well as a Commonwealth Corps made up of Australian, British, and Canadian divisions.

Japan’s geography made this invasion plan obvious to the Japanese; they were able to predict the Allied invasion plans accurately and adjust their defensive plan, Operation Ketsugō, accordingly. The Japanese planned an all-out defense of Kyūshū, with little left in reserve for any subsequent defense operations. Four veteran divisions were withdrawn from the Kwantung Army in Manchuria in March 1945 to strengthen the forces in Japan, and 45 new divisions were activated between February and May 1945.

The Americans were alarmed by the Japanese buildup, which was accurately tracked through Ultra intelligence. Secretary of War Henry L. Stimson was sufficiently concerned about high American estimates of probable casualties to commission his own study by Quincy Wright and William Shockley. Wright and Shockley spoke with Colonels James McCormack and Dean Rusk and examined casualty forecasts by Michael E. DeBakey and Gilbert Beebe. Wright and Shockley estimated the invading Allies would suffer between 1.7 and 4 million casualties in such a scenario, of whom between 400,000 and 800,000 would be dead, while Japanese fatalities would have been around 5 to 10 million.

The discovery of nuclear fission by German chemists Otto Hahn and Fritz Strassmann in 1938, and its theoretical explanation by Lise Meitner and Otto Frisch, made the development of an atomic bomb a theoretical possibility. Fears that a German atomic bomb project would develop atomic weapons first, especially among scientists who were refugees from Nazi Germany and other fascist countries, were expressed in the Einstein-Szilard letter. This prompted preliminary research in the United States in late 1939, supported by President Roosevelt. Progress was slow until the arrival of the British MAUD Committee report in late 1941, which indicated that only 5–10 kilograms of isotopically enriched uranium-235 was needed for a bomb instead of tons of unenriched uranium and a neutron moderator (e.g. heavy water).

Working in collaboration with the United Kingdom and Canada, with their respective projects Tube Alloys and Chalk River Laboratories, the Manhattan Project, under the direction of Major General Leslie R. Groves, Jr., of the U.S. Army Corps of Engineers, designed and built the first atomic bombs. Groves appointed J. Robert Oppenheimer to organize and head the project’s Los Alamos Laboratory in New Mexico, where bomb design work was carried out. Two types of bombs were eventually developed. Little Boy was a gun-type fission weapon that used uranium-235, a rare isotope of uranium separated at the Clinton Engineer Works at Oak Ridge, Tennessee. The other, known as a Fat Man, was a more powerful and efficient, but more complicated, implosion-type nuclear weapon that used plutonium created in nuclear reactors at Hanford, Washington. A test implosion weapon, the gadget, was detonated at Trinity Site, on July 16, 1945, near Alamogordo, New Mexico.

Decision to Drop the Second Bomb

After the Hiroshima bombing, Truman issued a statement announcing the use of the new weapon. He stated, “We may be grateful to Providence” that the German atomic bomb project had failed, and that the United States and its allies had “spent two billion dollars on the greatest scientific gamble in history—and won.” Truman then warned Japan: “If they do not now accept our terms, they may expect a rain of ruin from the air, the like of which has never been seen on this earth. Behind this air attack will follow sea and land forces in such numbers and power as they have not yet seen and with the fighting skill of which they are already well aware.”

The Japanese government did not react. On August 7, a day after Hiroshima was destroyed, Dr. Yoshio Nishina and other atomic physicists arrived at the city and carefully examined the damage. They returned to Tokyo and told the cabinet that Hiroshima was indeed destroyed by an atomic bomb. Admiral Soemu Toyoda, the Chief of the Naval General Staff, estimated that no more than one or two additional bombs could be readied, so they decided to endure the remaining attacks, acknowledging “there would be more destruction but the war would go on.” American Magic codebreakers intercepted the cabinet’s messages.

Purnell, Parsons, Tibbets, Spaatz, and LeMay met on Guam that same day to discuss what should be done next. Since there was no indication of Japan surrendering, they decided to proceed with dropping another bomb. Parsons said that Project Alberta would have it ready by August 11, but Tibbets pointed to weather reports indicating poor flying conditions on that day due to a storm, and asked if the bomb could be readied by August 9. Parsons agreed to try to do so.

The role of the bombings in Japan’s surrender and the U.S.’s ethical justification for them has been the subject of scholarly and popular debate for decades. J. Samuel Walker wrote in an April 2005 overview of recent historiography on the issue, “the controversy over the use of the bomb seems certain to continue.” He wrote that “the fundamental issue that has divided scholars over a period of nearly four decades is whether the use of the bomb was necessary to achieve victory in the war in the Pacific on terms satisfactory to the United States.”

Supporters of the bombings generally assert that they caused the Japanese surrender, preventing casualties on both sides during Operation Downfall. One figure of speech, “One hundred million [subjects of the Japanese Empire] will die for the Emperor and Nation,” served as a unifying slogan. In Truman’s 1955 Memoirs, “he states that the atomic bomb probably saved half a million U.S. lives—anticipated casualties in an Allied invasion of Japan planned for November. Stimson subsequently talked of saving one million U.S. casualties, and Churchill of saving one million American and half that number of British lives.” Scholars have pointed out various alternatives that could have ended the war without an invasion, but these could have resulted in the deaths of many more Japanese. Supporters also point to an order given by the Japanese War Ministry on August 1, 1944, ordering the execution of Allied prisoners of war when the POW camp was in the combat zone.

Those who oppose the bombings cite a number of reasons, including the belief that atomic bombing is fundamentally immoral, that the bombings counted as war crimes, that they were militarily unnecessary, that they constituted state terrorism, and that they involved racism against and the dehumanization of the Japanese people. Another popular view among critics of the bombings, originating with Gar Alperovitz in 1965 and becoming the default position in Japanese school history textbooks, is the idea of atomic diplomacy: that the United States used nuclear weapons r to intimidate the Soviet Union in the early stages of the Cold War. The bombings were part of an already fierce conventional bombing campaign. This, together with the sea blockade and the collapse of Germany (with its implications regarding redeployment), could also have led to a Japanese surrender. At the time the United States dropped its atomic bomb on Nagasaki on August 9, 1945, the Soviet Union launched a surprise attack with 1.6 million troops against the Kwantung Army in Manchuria. “The Soviet entry into the war,” argued Japanese historian Tsuyoshi Hasegawa, “played a much greater role than the atomic bombs in inducing Japan to surrender because it dashed any hope that Japan could terminate the war through Moscow’s mediation.” 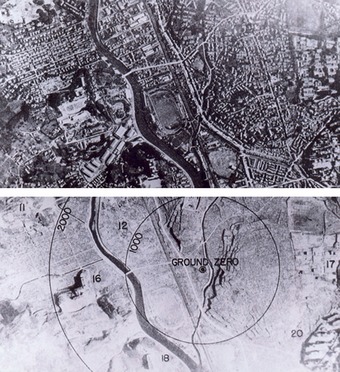 Atomic Bombing of Nagasaki: Nagasaki, before and after the atomic bomb detonation