In July 1945, Allied leaders met in Potsdam, Germany, confirmed earlier agreements about post-war Germany, and reiterated the demand for unconditional surrender of all Japanese forces , specifically stating that “the alternative for Japan is prompt and utter destruction.”

Analyze the relations between the Allied nations at the Potsdam Conference

Clement Attlee
A British politician who was the Prime Minister of the United Kingdom from 1945 to 1951, taking over from Winston Churchill at the end of World War II.
Yalta Conference
A meeting in February 1945 between the three heads of the main Allied forces in WWII, intended mainly to discuss the re-establishment of the nations of war-torn Europe.
Manhattan Project
A research and development project that produced the first nuclear weapons during World War II.

The Potsdam Conference was held at Cecilienhof, the home of Crown Prince Wilhelm in Potsdam, occupied Germany, from July 17 to August 2, 1945. Participants were the Soviet Union, the United Kingdom, and the United States. The powers were represented by Communist Party General Secretary Joseph Stalin, Prime Ministers Winston Churchill and, later, Clement Attlee, and President Harry S. Truman.

Stalin, Churchill, and Truman—as well as Attlee, who participated alongside Churchill while awaiting the outcome of the 1945 general election and then became prime minister after the Labour Party’s defeat of the Conservatives—gathered to decide how to administer defeated Nazi Germany, which had agreed to unconditional surrender nine weeks earlier on May 8 (V-E Day). The goals of the conference included the establishment of post-war order, peace treaty issues, and countering the effects of the war.

Relationships Among the Leaders

In the five months since the Yalta Conference, a number of changes had taken place that greatly affected the relationships between the leaders. By July, the Red Army effectively controlled the Baltic states, Poland, Czechoslovakia, Hungary, Bulgaria, and Romania, and fearing a Stalinist take-over, refugees were fleeing from these countries. Stalin had set up a communist government in Poland. He insisted that his control of Eastern Europe was a defensive measure against possible future attacks and claimed that it was a legitimate sphere of Soviet influence.

President Roosevelt died on April 12, 1945, and Vice President Harry Truman assumed the presidency; his succession saw VE Day (Victory in Europe) within a month and VJ Day (Victory in Japan) on the horizon. During the war and in the name of Allied unity, Roosevelt had brushed off warnings of a potential domination by a Stalin dictatorship in part of Europe. While inexperienced in foreign affairs, Truman had closely followed the Allied progress during the war. George Lenczowski notes “despite the contrast between his relatively modest background and the international glamour of his aristocratic predecessor, [Truman] had the courage and resolution to reverse the policy that appeared to him naive and dangerous,” which was “in contrast to the immediate, often ad hoc moves and solutions dictated by the demands of the war.” With the end of the war, the priority of Allied unity was replaced with a new challenge, the nature of the relationship between the two emerging superpowers.

Truman was much more suspicious of communist moves than Roosevelt had been, and became increasingly suspicious of Soviet intentions under Stalin. Truman and his advisers saw Soviet actions in Eastern Europe as aggressive expansionism, which was incompatible with the agreements Stalin committed to at Yalta the previous February. In addition, at the Potsdam Conference Truman became aware of possible complications elsewhere when Stalin objected to Churchill’s proposal for an early Allied withdrawal from Iran ahead of the schedule agreed at the Tehran Conference. The Potsdam Conference marks the first and only time Truman would ever meet Stalin in person. 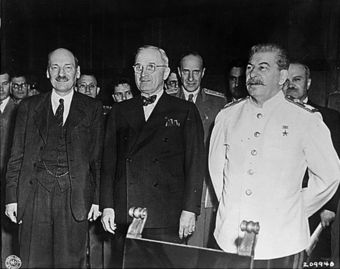 At the end of the conference, the three heads of government agreed on the following actions. All other issues would to be answered by the final peace conference to be called as soon as possible.

Truman mentioned an unspecified “powerful new weapon” to Stalin during the conference. Towards the end of the meeting, Japan was given an ultimatum to surrender or meet “prompt and utter destruction,” which did not mention the new bomb. Prime minister Kantarō Suzuki did not respond. Therefore, the United States dropped atomic bombs on Hiroshima on August 6 and Nagasaki on August 9, 1945. The justification was that both cities were legitimate military targets to end the war swiftly and preserve American lives. However, to some the timing has suggested that Truman did not want Stalin involved in the terms of Japan’s surrender. It is important to note that Truman delayed the Potsdam Conference in order to be sure of the functionality of this “powerful new weapon.” Notably, when Truman informed Stalin of the atomic bomb, he did not explicitly mention its atomic nature. Stalin, though, had full knowledge of the atomic bomb’s development due to Soviet spy networks inside the Manhattan Project, and told Truman at the conference to “make good use of this new addition to the Allied arsenal.”