Hard-fought battles on the Japanese home islands of Iwo Jima, Okinawa, and others resulted in horrific casualties on both sides but finally produced a Japanese defeat.

island hopping
A military strategy employed by the Allies in the Pacific War against Japan to bypass heavily fortified Japanese positions and instead concentrate the limited Allied resources on strategically important islands that were not well-defended but were capable of supporting the drive to the main islands of Japan.
“typhoon of steel”
American nickname for the battle of Okinawa, named for the ferocity of the fighting, the intensity of Japanese kamikaze attacks, and the sheer numbers of Allied ships and armored vehicles that assaulted the island.

The battle of Iwo Jima (“Operation Detachment”) in February 1945 was one of the bloodiest battles fought by the Americans in the Pacific War. Iwo Jima was an eight-square-mile island situated halfway between Tokyo and the Mariana Islands. Holland Smith, the commander of the invasion force, aimed to capture the island and use its three airfields as bases to carry out air attacks against the Home Islands. Lt. General Tadamichi Kuribayashi, the commander of the island’s defense, knew that he could not win the battle but hoped to make the Americans suffer far more than they could endure.

From early 1944 until the days leading up to the invasion, Kuribayashi transformed the island into a massive network of bunkers, hidden guns, and 11 miles of underground tunnels. The heavy American naval and air bombardment did little but drive the Japanese further underground, making their positions impervious to enemy fire. Their pillboxes and bunkers were all connected so that if one was knocked out it could be reoccupied again. The network of bunkers and pillboxes greatly favored the defender.

Starting in mid-June 1944, Iwo Jima came under sustained aerial bombardment and naval artillery fire. However, Kuribayashi’s hidden guns and defenses survived the constant bombardment virtually unscathed. On February 19, 1945, some 30,000 men of the 3rd, 4th, and 5th Marine Divisions landed on the southeast coast of Iwo, just under Mount Suribachi, where most of the island’s defenses were concentrated. For some time, they did not come under fire. This was part of Kuribayashi’s plan to hold fire until the landing beaches were full. As soon as the Marines pushed inland to a line of enemy bunkers, they came under devastating machine gun and artillery fire which cut down many of the men. By the end of the day, the Marines reached the west coast of the island, but their losses were appalling: almost 2,000 men killed or wounded.

On February 23, the 28th Marine Regiment reached the summit of Suribachi, prompting the now famous Raising the Flag on Iwo Jima picture. Navy Secretary James Forrestal, upon seeing the flag, remarked “there will be a Marine Corps for the next 500 years.” The flag raising is often cited as the most reproduced photograph of all time and became the archetypal representation not only of that battle, but of the entire Pacific War. For the rest of February, the Americans pushed north, and by March 1 had taken two-thirds of the island, but it was not until March 26 that the island was finally secured. The Japanese fought to the last man, killing 6,800 Marines and wounding nearly 20,000 more. The Japanese losses totaled well over 20,000 men killed, and only 1,083 prisoners were taken. Historians debate whether it was strategically worth the casualties sustained. 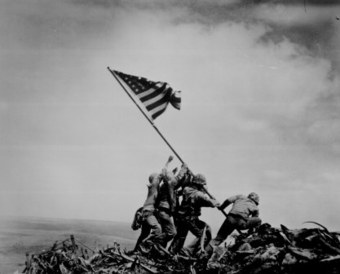 Iwo Jima: Raising the Flag on Iwo Jima, by Joe Rosenthal, became the only photograph to win the Pulitzer Prize for Photography in the same year as its publication, and came to be regarded in the United States as one of the most significant and recognizable images of the war.

The Battle of Okinawa, code named Operation Iceberg, was a series of battles fought in the Japanese Ryukyu Islands, centered on the island of Okinawa. It included the largest amphibious assault in the Pacific War during World War II, the April 1, 1945 invasion of Okinawa itself. The 82-day-long battle lasted from April 1 until June 22, 1945. After a long campaign of island hopping, the Allies were approaching Japan and planned to use Okinawa, a large island only 340 miles away from mainland Japan, as a base for air operations for the planned invasion of Honshu, the Japanese mainland. Four divisions of the U.S. 10th Army (the 7th, 27th, 77th, and 96th) and two Marine Divisions (the 1st and 6th) fought on the island, supported by naval, amphibious, and tactical air forces.

The battle has been referred to as the “typhoon of steel” in English, and tetsu no ame (“rain of steel”) in Japanese. The nicknames refer to the ferocity of the fighting, the intensity of Japanese kamikaze attacks, and the sheer numbers of Allied ships and armored vehicles that assaulted the island. The battle was one of the bloodiest in the Pacific, with more than 82,000 direct casualties on both sides: 14,009 Allied deaths (over 12,500 Americans killed or missing) and 77,166 Japanese soldiers, excluding those who died from their injuries later. Some islands that saw major battles, such as Iwo Jima, were uninhabited or previously evacuated. Okinawa, by contrast, had a large indigenous civilian population. 42,000 to 150,000 local civilians were killed, committed suicide, or went missing, a significant proportion of the estimated prewar local population of 300,000.

As part of the naval operations surrounding the battle, the Japanese super-battleship Yamato was sunk and both sides lost considerable numbers of ships and aircraft. The military value of Okinawa “exceeded all hope.” After the battle, Okinawa provided a fleet anchorage, troop staging areas, and airfields in proximity to Japan in preparation for the planned invasion of Japan.

Many military historians believe that the Okinawa campaign led directly to the atomic bombings of Hiroshima and Nagasaki as a means of avoiding the planned ground invasion of the Japanese mainland. This view is explained by Victor Davis Hanson in his book Ripples of Battle:

…because the Japanese on Okinawa… were so fierce in their defense (even when cut off, and without supplies), and because casualties were so appalling, many American strategists looked for an alternative means to subdue mainland Japan, other than a direct invasion. This means presented itself, with the advent of atomic bombs, which worked admirably in convincing the Japanese to sue for peace [unconditionally], without American casualties.

Leapfrogging, also known as island hopping, was a military strategy employed by the Allies in the Pacific War against Japan and the Axis powers during World War II. The idea was to bypass heavily fortified Japanese positions and instead concentrate the limited Allied resources on strategically important islands that were not well-defended but were capable of supporting the drive to the main islands of Japan.

This strategy was possible in part because the Allies used submarine and air attacks to blockade and isolate Japanese bases, weakening their garrisons and reducing the Japanese ability to resupply and reinforce them. Thus troops on islands which had been bypassed, such as the major base at Rabaul, were useless to the Japanese war effort and left to “wither on the vine.” General Douglas MacArthur supported this strategy in his effort to regain the Philippines and it was implemented in late 1943 in Operation Cartwheel. While MacArthur claimed to have invented the strategy, it initially came out of the Navy.

Leapfrogging had a number of advantages. It would allow the United States forces to reach Japan quickly and not expend the time, manpower, and supplies to capture every Japanese-held island on the way. It would give the Allies the advantage of surprise and keep the Japanese off balance. The overall leapfrogging strategy would involve two prongs. A force led by Admiral Chester Nimitz, with a smaller land force and larger fleet, would advance north towards the island and capture the Gilbert and Marshall Islands and the Marianas, going in the direction of the Bonin Islands. The southern prong, led by General MacArthur and with larger land forces, would take the Solomons, New Guinea, and the Bismarck Archipelago, advancing toward the Philippines.