The Allied Push to Berlin

The war in Europe concluded with an invasion of Germany by the Western Allies and the Soviet Union, culminating in the capture of Berlin by Soviet and Polish troops and the subsequent German unconditional surrender on May 8, 1945.

Joseph Goebbels
A German politician and Reich Minister of Propaganda in Nazi Germany from 1933 to 1945; one of Adolf Hitler’s close associates and most devoted followers, he was known for his skills in public speaking and his deep and virulent antisemitism, which led to his support of the extermination of the Jews in the Holocaust.
Eva Braun
The longtime companion of Adolf Hitler and for less than 40 hours, his wife.
Battle of Berlin
The final major offensive of the European theatre of World War II when the Soviet Red Army invaded Berlin, Germany.

On December 16, 1944, Germany made a last attempt on the Western Front by using most of its remaining reserves to launch a massive counter-offensive in the Ardennes to split the Western Allies, encircle large portions of Western Allied troops, and capture their primary supply port at Antwerp to prompt a political settlement. By January, the offensive was repulsed with no strategic objectives fulfilled. In Italy, the Western Allies remained stalemated at the German defensive line. In mid-January 1945, the Soviets and Poles attacked in Poland, pushing from the Vistula to the Oder river in Germany, and overran East Prussia. On February 4, U.S., British, and Soviet leaders met for the Yalta Conference. They agreed on the occupation of post-war Germany and when the Soviet Union would join the war against Japan.

In February, the Soviets entered Silesia and Pomerania, while Western Allies entered western Germany and closed to the Rhine river. By March, the Western Allies crossed the Rhine north and south of the Ruhr, encircling the German Army Group B, while the Soviets advanced to Vienna. In early April, the Western Allies finally pushed forward in Italy and swept across western Germany, while Soviet and Polish forces stormed Berlin in late April. American and Soviet forces joined on Elbe river on April 25. On April 30, 1945, the Reichstag was captured, signalling the military defeat of Nazi Germany.

Several changes in leadership occurred during this period. On April 12, President Roosevelt died and was succeeded by Harry Truman. Benito Mussolini was killed by Italian partisans on April 28. Two days later, as the Battle of Berlin raged above him, realizing that all was lost and not wishing to suffer Mussolini’s fate, German dictator Adolf Hitler committed suicide in his Führerbunker along with Eva Braun, his long-term partner whom he married less than 40 hours before their joint suicide. In his will, Hitler dismissed Reichsmarschall Hermann Göring, his second-in-command, and Interior minister Heinrich Himmler after each of them separately tried to seize control of the crumbling Third Reich. Hitler appointed his successors as follows; Großadmiral Karl Dönitz as the new Reichspräsident (“President of Germany”) and Joseph Goebbels as the new Reichskanzler (Chancellor of Germany). However, Goebbels committed suicide the following day, leaving Dönitz as the sole leader of Germany.

German forces surrendered in Italy on April 29. Total and unconditional surrender was signed on May 7 to be effective by the end of May 8. German Army Group Centre resisted in Prague until May 11.

At the end of the war, millions of people were homeless, the European economy had collapsed, and much of the European industrial infrastructure had been destroyed.

The Western Allied Invasion of Germany

The Western Allied invasion of Germany was coordinated by the Western Allies during the final months of hostilities in the European theater of World War II. The Allied invasion of Germany started with the Western Allies crossing the River Rhine in March 1945 before overrunning all of western Germany from the Baltic in the north to Austria in the south before the Germans surrendered on May 8, 1945. This is known as the “Central Europe Campaign” in United States military histories and is often considered the end of the second World War in Europe.

By the beginning of the Central Europe Campaign, Allied victory in Europe was inevitable. Having gambled his future ability to defend Germany on the Ardennes offensive and lost, Hitler had no strength left to stop the powerful Allied armies. The Western Allies still had to fight, often bitterly, for victory. Even when the hopelessness of the German situation became obvious to his most loyal subordinates, Hitler refused to admit defeat. Only when Soviet artillery was falling around his Berlin headquarters bunker did he begin to perceive the final outcome.

The crossing of the Rhine, the encirclement and reduction of the Ruhr, and the sweep to the Elbe-Mulde line and the Alps all established the final campaign on the Western Front as a showcase for Allied superiority in maneuver warfare. Drawing on the experience gained during the campaign in Normandy and the Allied advance from Paris to the Rhine, the Western Allies demonstrated in Central Europe their capability to absorb the lessons of the past. By attaching mechanized infantry units to armored divisions, they created a hybrid of strength and mobility that served them well in the pursuit warfare through Germany. Key to the effort was the logistical support that kept these forces fueled and the determination to maintain the forward momentum at all costs. These mobile forces made great thrusts to isolate pockets of German troops, which were mopped up by additional infantry following close behind. The Allies rapidly eroded any remaining ability to resist.

The Battle of Berlin

The Battle of Berlin, designated the Berlin Strategic Offensive Operation by the Soviet Union, was the final major offensive of the European theater of World War II.

Following the Vistula–Oder Offensive of January–February 1945, the Red Army temporarily halted on a line 37 miles east of Berlin. When the offensive resumed on April 16, two Soviet army groups attacked Berlin from the east and south, while a third overran German forces positioned north of Berlin.

The first defensive preparations at the outskirts of Berlin were made on March 20 under the newly appointed commander of Army Group Vistula, General Gotthard Heinrici. Before the main battle in Berlin commenced, the Red Army encircled the city after successful battles of the Seelow Heights and Halbe. On April 20, 1945, the 1st Belorussian Front led by Marshal Georgy Zhukov started shelling Berlin’s city center, while Marshal Ivan Konev’s 1st Ukrainian Front pushed from the south through the last formations of Army Group Centre. Defenses in Berlin’s city center were mainly led by General Helmuth Weidling. These units consisted of several depleted and disorganized Wehrmacht and Waffen-SS divisions, along with poorly trained Volkssturm and Hitler Youth members. Within the next few days, the Red Army reached the city center, where close-quarters combat raged.

The city’s garrison surrendered to Soviet forces on May 2, but fighting continued to the northwest, west, and southwest of the city until the end of the war in Europe on May 8  as German units fought westward so that they could surrender to the Western Allies rather than to the Soviets. 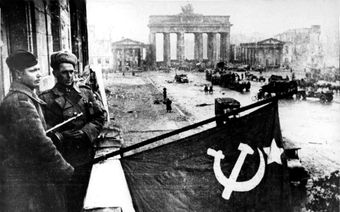 Battle of Berlin: After the battle, Soviet soldiers hoist the Soviet flag on the balcony of the Hotel Adlon in Berlin

In most of the camps discovered by the Soviets, almost all the prisoners had already been removed, leaving only a few thousand alive—7,600 inmates were found in Auschwitz, including 180 children who had been experimented on by doctors. Some 60,000 prisoners were discovered at Bergen-Belsen by the British 11th Armoured Division, 13,000 corpses lay unburied, and another 10,000 died from typhus or malnutrition over the following weeks. The British forced the remaining SS guards to gather up the corpses and place them in mass graves.

The BBC’s Richard Dimbleby described the scenes that greeted him and the British Army at Belsen:

Here over an acre of ground lay dead and dying people. You could not see which was which… The living lay with their heads against the corpses and around them moved the awful, ghostly procession of emaciated, aimless people, with nothing to do and with no hope of life, unable to move out of your way, unable to look at the terrible sights around them… Babies had been born here, tiny wizened things that could not live… A mother, driven mad, screamed at a British sentry to give her milk for her child, and thrust the tiny mite into his arms… He opened the bundle and found the baby had been dead for days. This day at Belsen was the most horrible of my life. 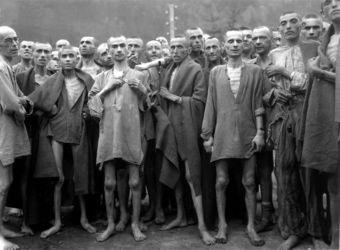 Liberation: Starving prisoners in Mauthausen camp liberated on May 5, 1945.