The Yalta Conference, held from February 4 to 11, 1945, was the World War II meeting of the heads of government of the United States, the United Kingdom, and the Soviet Union to discuss Europe’s post-war reorganization.

Compare the Yalta Conference to the Tehran Conference

reparations
Payments intended to cover damage or injury inflicted during a war.
denazification
An Allied initiative to rid German and Austrian society, culture, press, economy, judiciary, and politics of any remnants of the National Socialist ideology (Nazism). It was carried out by removing from positions of power and influence those who had been Nazi Party members and disbanding or rendering impotent the organizations associated with Nazism.
Declaration of Liberated Europe
A declaration as created by Winston Churchill, Franklin D. Roosevelt, and Joseph Stalin during the Yalta Conference. It was a promise that allowed the people of Europe “to create democratic institutions of their own choice.”

The Yalta Conference, sometimes called the Crimea Conference and code named the Argonaut Conference, was held from February 4 to 11, 1945. This World War II meeting comprised the heads of government of the United States, the United Kingdom, and the Soviet Union, represented by President Franklin D. Roosevelt, Prime Minister Winston Churchill, and Premier Joseph Stalin, respectively, to discuss Europe’s post-war reorganization. The conference convened in the Livadia Palace near Yalta in Crimea.

The meeting was intended mainly to discuss the re-establishment of the nations of war-torn Europe. Within a few years, with the Cold War dividing the continent, Yalta had become a subject of intense controversy. To a degree, it has remained controversial.

Yalta was the second of three wartime conferences among the Big Three, preceded by the Tehran Conference in 1943 and followed by the Potsdam Conference in July 1945, attended by Stalin, Churchill (who was replaced halfway through by the newly elected British Prime Minister Clement Attlee), and Harry S. Truman, Roosevelt’s successor. The Yalta conference was a crucial turning point in the Cold War.

All three leaders attempted to establish an agenda for governing post-war Europe and keep peace between post-war countries. On the Eastern Front, the front line at the end of December 1943 remained in the Soviet Union but by August 1944, Soviet forces were inside Poland and Romania as part of their drive west. By the time of the Conference, Red Army Marshal Georgy Zhukov’s forces were 40 miles from Berlin. Stalin’s felt his position at the conference was so strong that he could dictate terms. According to U.S. delegation member and future Secretary of State James F. Byrnes, “[i]t was not a question of what we would let the Russians do, but what we could get the Russians to do.” Moreover, Roosevelt hoped for a commitment from Stalin to participate in the United Nations.

Each leader had an agenda for the Yalta Conference: Roosevelt wanted Soviet support in the U.S. Pacific War against Japan, specifically for the planned invasion of Japan (Operation August Storm), as well as Soviet participation in the UN; Churchill pressed for free elections and democratic governments in Eastern and Central Europe (specifically Poland); and Stalin demanded a Soviet sphere of political influence in Eastern and Central Europe, an essential aspect of the USSR’s national security strategy.

Poland was the first item on the Soviet agenda. Stalin stated that “For the Soviet government, the question of Poland was one of honor” and security because Poland had served as a historical corridor for forces attempting to invade Russia. In addition, Stalin stated that “because the Russians had greatly sinned against Poland,” “the Soviet government was trying to atone for those sins.” Stalin concluded that “Poland must be strong” and that “the Soviet Union is interested in the creation of a mighty, free and independent Poland.” Accordingly, Stalin stipulated that Polish government-in-exile demands were not negotiable: the Soviet Union would keep the territory of eastern Poland they had already annexed in 1939, and Poland was to be compensated by extending its western borders at the expense of Germany. Comporting with his prior statement, Stalin promised free elections in Poland despite the Soviet-sponsored provisional government recently installed in Polish territories occupied by the Red Army.

The Declaration of Liberated Europe t was created by Winston Churchill, Franklin D. Roosevelt, and Joseph Stalin during the Yalta Conference. It was a promise that allowed the people of Europe “to create democratic institutions of their own choice.” The declaration pledged, “the earliest possible establishment through free elections governments responsive to the will of the people.” This is similar to the statements of the Atlantic Charter, which says, “the right of all people to choose the form of government under which they will live.” Stalin broke the pledge by encouraging Poland, Romania, Bulgaria, Hungary, and many more countries to construct a Communist government instead of letting the people construct their own. These countries later became known as Stalin’s Satellite Nations.

The key points from the meeting are as follows: 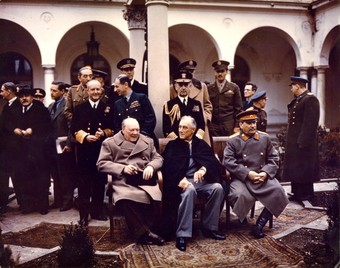