The End of the War

The Western Allies of World War II launched the largest amphibious invasion in history when they assaulted Normandy, located on the northern coast of France, on June 6, 1944. They were able to establish a beachhead after a successful “D-Day,” the first day of the invasion.

Outline the events of the Invasion of Normandy

The Western Allies of World War II launched the largest amphibious invasion in history when they assaulted Normandy, located on the northern coast of France, on June 6, 1944. The invaders were able to establish a beachhead as part of Operation Overlord after a successful “D-Day,” the first day of the invasion.

Allied land forces came from the United States, Britain, Canada, and Free France. In the weeks following the invasion, Polish forces and contingents from Belgium, Czechoslovakia, Greece, and the Netherlands participated in the ground campaign; most also provided air and naval support alongside elements of the Royal Australian Air Force, the Royal New Zealand Air Force, and the Royal Norwegian Navy.

The Normandy invasion began with overnight parachute and glider landings, massive air attacks, and naval bombardments. In the early morning, amphibious landings on five beaches code named Sword, Juno, Gold, Omaha, and Utah began. During the evening the remaining elements of the airborne divisions landed. Land forces used on D-Day sailed from bases along the south coast of England, most importantly Portsmouth.

The Allies failed to reach their goals for the first day, but gained a tenuous foothold that they gradually expanded when they captured the port at Cherbourg on June 26 and the city of Caen on July 21. A failed counterattack by German forces on August 8 led to 50,000 soldiers of the 7th Army being trapped in the Falaise pocket. The Allies launched an invasion of southern France (code-named Operation Dragoon) on August 15, and the Liberation of Paris followed on August 25. German forces retreated across the Seine on August 30, 1944, marking the close of Operation Overlord. 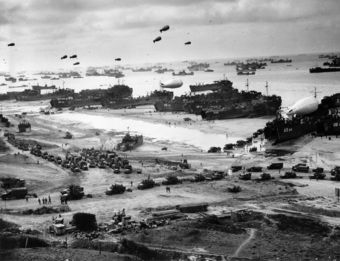 The Normandy landings (code named Operation Neptune) on Tuesday, June 6, 1944, (termed D-Day) were the Allied invasion of Normandy in Operation Overlord during World War II. The largest seaborne invasion in history, the operation began the liberation of German-occupied northwestern Europe from Nazi control and contributed to the Allied victory on the Western Front.

Planning for the operation began in 1943. In the months leading up to the invasion, the Allies conducted a substantial military deception, code named Operation Bodyguard, to mislead the Germans as to the date and location of the main Allied landings. The weather on D-Day was far from ideal, but postponing would have meant a delay of at least two weeks as the invasion planners had requirements for the phase of the moon, the tides, and the time of day that meant only a few days in each month were suitable. Adolf Hitler placed German Field Marshal Erwin Rommel in command of German forces and of developing fortifications along the Atlantic Wall in anticipation of an Allied invasion.

The amphibious landings were preceded by extensive aerial and naval bombardment and an airborne assault—the landing of 24,000 American, British, and Canadian airborne troops shortly after midnight. Allied infantry and armored divisions began landing on the coast of France at 06:30. The target 50-mile stretch of the Normandy coast was divided into five sectors: Utah, Omaha, Gold, Juno, and Sword. Strong winds blew the landing craft east of their intended positions, particularly at Utah and Omaha. The men landed under heavy fire from gun emplacements overlooking the beaches, and the shore was mined and covered with obstacles such as wooden stakes, metal tripods, and barbed wire, making the work of the beach-clearing teams difficult and dangerous. Casualties were heaviest at Omaha, with its high cliffs. At Gold, Juno, and Sword, several fortified towns were cleared in house-to-house fighting, and two major gun emplacements at Gold were disabled using specialized tanks.

The Allies failed to achieve any of their goals on the first day. Carentan, St. Lô, and Bayeux remained in German hands, and Caen, a major objective, was not captured until July 21. Only two of the beaches (Juno and Gold) were linked on the first day, and all five beachheads were not connected until June 12; however, the operation gained a foothold which the Allies gradually expanded over the coming months. German casualties on D-Day have been estimated at 4,000 to 9,000 men. Allied casualties were at least 10,000, with 4,414 confirmed dead. Museums, memorials, and war cemeteries in the area now host many visitors each year. 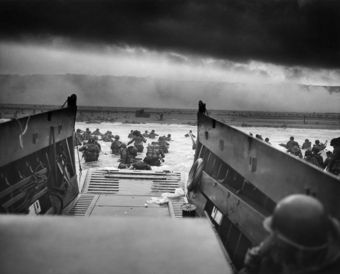 The Normandy landings were the first successful opposed landings across the English Channel in over eight centuries. They were costly in terms of men, but the defeat inflicted on the Germans was one of the largest of the war. Strategically, the campaign led to the loss of the German position in most of France and the secure establishment of a new major front. In larger context, the Normandy landings helped the Soviets on the Eastern Front, who were facing the bulk of the German forces and to a certain extent contributed to the shortening of the conflict there.

Although there was a shortage of artillery ammunition, at no time were the Allies critically short of any necessity. This was a remarkable achievement considering they did not hold a port until Cherbourg fell. By the time of the breakout the Allies also enjoyed considerable superiority in numbers of troops (approximately 7:2) and armored vehicles (approximately 4:1), which helped overcome the natural advantages the terrain gave to the German defenders.

Allied intelligence and counterintelligence efforts were successful beyond expectations. The Operation Fortitude deception before the invasion kept German attention focused on the Pas de Calais, and high-quality German forces were kept in this area, away from Normandy, until July. Prior to the invasion, few German reconnaissance flights took place over Britain, and those that did saw only the dummy staging areas. Ultra decrypts of German communications were helpful as well, exposing German dispositions and revealing their plans such as the Mortain counterattack.

Allied air operations also contributed significantly to the invasion via close tactical support, interdiction of German lines of communication (preventing timely movement of supplies and reinforcements—particularly the critical Panzer units), and rendering the Luftwaffe ineffective in Normandy. Although the impact upon armored vehicles was less than expected, air activity intimidated these units and cut their supplies.

Despite initial heavy losses in the assault phase, Allied morale remained high. Casualty rates among all the armies were tremendous, and the Commonwealth forces had to use a recently created category—Double Intense—to describe them.