The Tehran Conference was a strategy meeting of Joseph Stalin, Franklin D. Roosevelt, and Winston Churchill from November 28 to December 1, 1943, resulting in the Western Allies’ commitment to open a second front against Nazi Germany.

Big Three
The leaders of the main three countries that together opposed the Axis powers during the Second World War: the United States, Britain, and the Soviet Union, namely Franklin D. Roosevelt, Winston Churchill, and Joseph Stalin.

The Tehran Conference (code named Eureka) was a strategy meeting of Joseph Stalin, Franklin D. Roosevelt, and Winston Churchill from November 28 to December 1, 1943. It was held in the Soviet Union’s embassy in Tehran, Iran and was the first World War II conference of the “Big Three” Allied leaders (the Soviet Union, the United States, and the United Kingdom). It closely followed the Cairo Conference which took place on November 22-26 1943, and preceded the 1945 Yalta and Potsdam conferences. Although the three leaders arrived with differing objectives, the main outcome of the Tehran Conference was the Western Allies’ commitment to open a second front against Nazi Germany. The conference also addressed the Allies’ relations with Turkey and Iran, operations in Yugoslavia and against Japan, and the envisaged post-war settlement. A separate protocol signed at the conference pledged the Big Three to recognize Iran’s independence.

The conference was to convene at 4 p.m. on November 28, 1943. Stalin arrived early, followed by Roosevelt, who brought in his wheelchair from his accommodation adjacent to the venue. Roosevelt, who had traveled 7,000 miles (11,000 km) to attend and whose health was already deteriorating, met Stalin for the first time. Churchill, walking with his General Staff from their accommodations nearby, arrived half an hour later.

The U.S. and Great Britain wanted to secure the cooperation of the Soviet Union in defeating Germany. Stalin agreed, but at a price: the U.S. and Britain would accept Soviet domination of eastern Europe, support the Yugoslav Partisans, and agree to a westward shift of the border between Poland and the Soviet Union.

The leaders then turned to the conditions under which the Western Allies would open a new front by invading northern France (Operation Overlord), as Stalin had pressed them to do since 1941. Up to this point Churchill had advocated the expansion of joint operations of British, American, and Commonwealth forces in the Mediterranean, as Overlord in 1943 was physically impossible due to a lack of shipping, which left the Mediterranean and Italy as viable goals for 1943. It was agreed Overlord would occur by May 1944; Stalin agreed to support it by launching a concurrent major offensive on Germany’s eastern front to divert German forces from northern France.

Iran and Turkey were discussed in detail. Roosevelt, Churchill, and Stalin all agreed to support Iran’s government. In addition, the Soviet Union was required to pledge support to Turkey if that country entered the war. Roosevelt, Churchill, and Stalin agreed that it would also be most desirable if Turkey entered on the Allies’ side before the year was out.

Despite accepting the above arrangements, Stalin dominated the conference, using the prestige of the Soviet victory at the Battle of Kursk to get his way. Roosevelt attempted to cope with Stalin’s onslaught of demands, but was able to do little except appease him. Churchill argued for the invasion of Italy in 1943, then Overlord in 1944, on the basis that Overlord was physically impossible in 1943 and it would be unthinkable to do anything major until it could be launched.

Churchill proposed to Stalin a moving westwards of Poland, which Stalin accepted, giving the Poles industrialized German land to the west and gave up marshlands to the east while providing a territorial buffer to the Soviet Union against invasion.

The declaration issued by the three leaders on conclusion of the conference on December 1, 1943, recorded the following military conclusions:

The Yugoslav Partisans were given full Allied support, and Allied support to the Yugoslav Chetniks was halted as they were believed to be cooperating with the occupying Germans rather than fighting them. The Communist Partisans under Tito took power in Yugoslavia as the Germans retreated from the Balkans.

Turkey’s president conferred with Roosevelt and Churchill at the Cairo Conference in November 1943 and promised to enter the war when it was fully armed. By August 1944 Turkey broke off relations with Germany. In February 1945, Turkey declared war on Germany and Japan, which may have been a symbolic move that allowed Turkey to join the future United Nations.

The invasion of France on June 6, 1944 took place about as planned, and the supporting invasion of southern France also occurred (Operation Dragoon). The Soviets launched a major offensive against the Germans on June 22, 1944 (Operation Bagration). 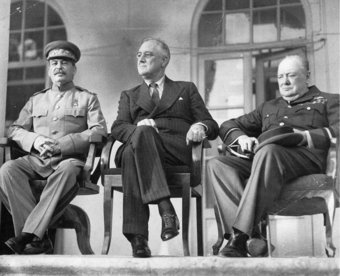 Tehran Conference 1943: The “Big Three.” From left to right: Joseph Stalin, Franklin D. Roosevelt, and Winston Churchill on the portico of the Russian Embassy during the Tehran Conference to discuss the European Theatre in 1943. Churchill is shown in the uniform of a Royal Air Force air commodore.