The Allied invasion of Sicily, code named Operation Husky, was a major campaign of World War II in which the Allies took the island of Sicily from the Axis powers.

Discuss the events of the Sicilian Campaign

Operation Mincemeat
A successful British disinformation plan during the Second World War, which convinced the German high command that the Allies planned to invade Greece and Sardinia in 1943 instead of Sicily, the actual objective.
Operation Husky
Codename for the allied invasion of Sicily in which the Allies took the island of Sicily from the Axis powers.

The Allied invasion of Sicily, code named Operation Husky, was a major campaign of World War II in which the Allies took the island of Sicily from the Axis powers (Italy and Nazi Germany). It was a large amphibious and airborne operation followed by a six-week land campaign and began the Italian Campaign.

Husky began on the night of July 9-10, 1943, and ended on August 17. Strategically, Husky achieved the goals set out for it by Allied planners; the Allies drove Axis air, land, and naval forces from the island and the Mediterranean sea lanes were opened for Allied merchant ships for the first time since 1941. Italian fascist leader, Benito Mussolini, was toppled from power, opening the way for the invasion of Italy. Hitler “canceled a major offensive at Kursk after only a week, in part to divert forces to Italy,” resulting in a reduction of German strength on the Eastern Front.

Following the defeat of the Axis Powers in North Africa in May 1943, there was disagreement between the Allies as to what the next step should be. British Prime Minister Winston Churchill wanted to invade Italy, which in November 1942 he called “the soft underbelly of the axis” (and General Mark Clark, in contrast, later called “one tough gut”). Popular support in Italy for the war was declining, and he believed an invasion would remove Italy and thus the influence of Axis forces in the Mediterranean Sea, opening it to Allied traffic. This would reduce the shipping capacity needed to supply Allied forces in the Middle East and Far East at a time when the disposal of Allied shipping capacity was in crisis, and increase British and American supplies to the Soviet Union. In addition, it would tie down German forces. Joseph Stalin, the Soviet leader, had been pressing Churchill and Roosevelt to open a “second front” in Europe, which would lessen the German Army’s focus on the Eastern Front where the bulk of its forces were fighting in the largest armed conflict in history.

To distract the Axis and possibly divert some of their forces to other areas, the Allies engaged in several deception operations. The most famous and successful of these was Operation Mincemeat. The British allowed a corpse disguised as a British Royal Marines officer to drift ashore in Spain carrying a briefcase containing fake secret documents that purported to reveal that the Allies were planning “Operation Brimstone” and that an “Operation Husky” was an invasion of Greece. German intelligence accepted the authenticity of the documents and the Germans diverted much of their defensive effort from Sicily to Greece until the occupation of Pantellaria on June 11, which concentrated German and Italian attention on the western Mediterranean. Generalfeldmarschall Erwin Rommel was sent to Greece to assume command. The Germans transferred a group of “R boats” (German minesweepers and minelayers) from Sicily and laid three additional minefields off the Greek coast. They also moved three panzer divisions to Greece, one from France and two from the Eastern Front, which reduced German combat strength in the Kursk salient.

The Invasion of Sicily

A combined British-Canadian-Indian-American invasion of Sicily began on July 10, 1943 with both amphibious and airborne landings at the Gulf of Gela (U.S. Seventh Army, Patton) and north of Syracuse (British Eighth Army, Montgomery). The original plan contemplated a strong advance by the British northwards along the east coast to Messina, with the Americans in a supporting role along their left flank. When the Eighth Army were held up by stubborn defenses in the rugged hills south of Mount Etna, Patton amplified the American role by a wide advance northwest toward Palermo and then directly north to cut the northern coastal road. This was followed by an eastward advance north of Etna towards Messina, supported by a series of amphibious landings on the north coast, that propelled Patton’s troops into Messina shortly before the first elements of Eighth Army. The defending German and Italian forces were unable to prevent the Allied capture of the island, but succeeded in evacuating most of their troops to the mainland, the last leaving on August 17, 1943. Allied forces gained experience in opposed amphibious operations, coalition warfare, and mass airborne drops. 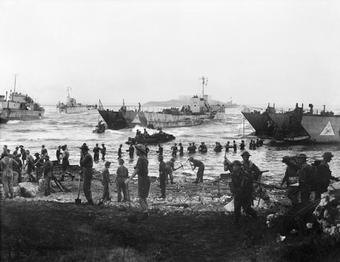 After the successful invasion of Sicily, forces of the British Eighth Army, still under Montgomery, landed in the “toe” of Italy on September 3, 1943 in Operation Baytown, the day the Italian government agreed to an armistice with the Allies. The armistice was publicly announced on September 8 by two broadcasts, first by Eisenhower and then a proclamation by Marshal Badoglio. Although the German forces prepared to defend without Italian assistance, only two of their divisions opposite the Eighth Army and one at Salerno were not tied up disarming the Italian Army.

On September 9, forces of the U.S. Fifth Army, expecting little resistance, landed against heavy German resistance at Salerno in Operation Avalanche; in addition, British forces landed at Taranto in Operation Slapstick, which was almost unopposed. There had been a hope that with the surrender of the Italian government, the Germans would withdraw to the north, since at the time Adolf Hitler had been persuaded that Southern Italy was strategically unimportant. However, this was not to be, though the Eighth Army was able to make relatively easy progress up the eastern coast, capturing the port of Bari and the important airfields around Foggia.

The American forces took possession of Rome on June 4, 1944. The German Tenth Army were allowed to get away and in the next few weeks were responsible for doubling the Allied casualties in the previous few months.

The Allies’ final offensive commenced with massive aerial and artillery bombardments on April 9, 1945. By April 18, Eighth Army forces in the east had broken through the Argenta Gap and sent armor racing forward in an encircling move to meet the US IV Corps advancing from the Apennines in Central Italy and trap the remaining defenders of Bologna.

As April came to an end, Army Group C, the Axis forces in Italy, was retreating on all fronts and had lost most of its fighting strength, left with little option but surrender. General Heinrich von Vietinghoff, who had taken command of Army Group C after Kesselring was transferred to become Commander-in-Chief of the Western Front (OB West) in March 1945, signed the instrument of surrender on behalf of the German armies in Italy on April 29, formally bringing hostilities to an end on May 2, 1945.