The North African Campaign was fought between the Allies and Axis powers, many of whom had colonial interests in Africa dating from the late 19th century. It took place from June 10, 1940, to May 13, 1943, and included campaigns fought in the Libyan and Egyptian deserts in Morocco, Algeria, and Tunisia.

Examine the significance of the North African Campaign

Tunisia Campaign
A series of battles that took place in Tunisia during the North African Campaign of the Second World War, between Axis and Allied forces.
Ultra
The designation adopted by British military intelligence in June 1941 for wartime signals intelligence obtained by breaking high-level encrypted enemy radio and teleprinter communications at the Government Code and Cypher School at Bletchley Park.
pincer
A military maneuver in which forces simultaneously attack both flanks (sides) of an enemy formation.

The North African Campaign of the Second World War took place in North Africa from June 10, 1940, to May 13, 1943. It included campaigns fought in the Libyan and Egyptian deserts (Western Desert Campaign, also known as the Desert War) and in Morocco and Algeria (Operation Torch) and Tunisia (Tunisia Campaign).

The campaign was fought between the Allies and Axis powers, many of whom had colonial interests in Africa dating from the late 19th century. The Allied war effort was dominated by the British Commonwealth and exiles from German-occupied Europe. The United States entered the war in December 1941 and began direct military assistance in North Africa on May 11, 1942.

Fighting in North Africa started with the Italian declaration of war on June 10, 1940. On June 14, the British Army’s 11th Hussars (assisted by elements of the 1st Royal Tank Regiment, 1st RTR) crossed the border from Egypt into Libya and captured the Italian Fort Capuzzo. This was followed by an Italian counter-offensive into Egypt and the capture of Sidi Barrani in September 1940 and then in December 1940 by a Commonwealth counteroffensive, Operation Compass. During Operation Compass, the Italian 10th Army was destroyed and the German Afrika Korps—commanded by Erwin Rommel, who later became known as “The Desert Fox”—was dispatched to North Africa during Operation Sonnenblume to reinforce Italian forces and prevent a complete Axis defeat.

A see-saw series of battles for control of Libya and parts of Egypt followed, reaching a climax in the Second Battle of El Alamein in 1942 when British Commonwealth forces under the command of Lieutenant-General Bernard Montgomery delivered a decisive defeat to the Axis forces and pushed them back to Tunisia. After the Allied Operation Torch landings in Northwest Africa in late 1942 and subsequent battles against Vichy France forces (who then changed sides), the Allies finally encircled Axis forces in northern Tunisia and forced their surrender.

Operation Torch in November 1942 was a compromise operation that met the British objective of securing victory in North Africa while allowing American armed forces the opportunity to engage in the fight against Nazi Germany on a limited scale. In addition, as Joseph Stalin, the leader of the Soviet Union, had long been demanding a second front be opened to engage the Wehrmacht and relieve pressure on the Red Army, it provided some degree of relief for the Red Army on the Eastern Front by diverting Axis forces to the African theater, tying them up and destroying them there.

Information gleaned via British Ultra code-breaking intelligence proved critical to Allied success in North Africa. Victory for the Allies in this campaign immediately led to the Italian Campaign, which culminated in the downfall of the fascist government in Italy and the elimination of a German ally.

The Western Desert Campaign, or the Desert War, took place in the Western Desert of Egypt and Libya and was a theater in the North African Campaign during the Second World War. The campaign began in September 1940 with the Italian invasion of Egypt. The Italians halted to bring up supplies and Operation Compass, a British five-day raid in December 1940, led to the destruction of the Italian 10th Army. Benito Mussolini sought help from Adolf Hitler and a small German blocking detachment was sent to Tripoli under Directive 22 (January 11). These were the first units of the Afrika Korps under nominal Italian command but Italian dependency on Nazi Germany made it the dominant partner.

In the spring of 1941, Axis forces under Rommel pushed the British back and reached Tobruk, which was subjected to the Siege of Tobruk until it was relieved during Operation Crusader. The Axis forces were forced to retire to their starting point by the end of the year. In 1942 Axis forces drove the British back and captured Tobruk at the end of the Battle of Gazala, but failed to gain a decisive victory. On the final Axis push to Egypt, the British retreated to El Alamein. At the Second Battle of El Alamein the Eighth Army defeated the Axis forces, which never recovered and were driven out of Libya to Tunisia, where they were defeated in the Tunisia Campaign. After the British defeats in the Balkan Campaign, the Western Desert Campaign became more important to British strategy. For Hitler, the Eastern Front against the Soviet Union dwarfed the desert war, which was a holding action of secondary importance. The Axis never had sufficient resources or the means to deliver them to defeat the British, who missed several opportunities to finish the campaign by diverting resources to Greece and the Levant in 1941 and the Far East in 1942. 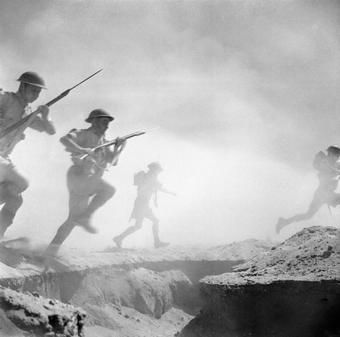 Battle of El Alamein, 1942: British infantry advances through the dust and smoke of the battle.

Operation Torch was the British-American invasion of French North Africa during the North African Campaign of the Second World War.

The Soviet Union pressed the United States and United Kingdom to start operations in Europe and open a second front to reduce the pressure of German forces on the Soviet troops. While the American commanders favored Operation Sledgehammer and landed in Occupied Europe as soon as possible, the British commanders believed that such a course would end in disaster.

An attack on French North Africa was proposed instead, which would clear the Axis powers from North Africa, improve naval control of the Mediterranean Sea, and prepare for an invasion of Southern Europe in 1943. U.S. President, Franklin D. Roosevelt suspected the African operation would rule out an invasion of Europe in 1943, but agreed to support British Prime Minister Winston Churchill.

Operation Torch started on November 8, 1942, and finished on November 11. In an attempt to pincer German and Italian forces, Allied forces (American and British Commonwealth), landed in Vichy-held French North Africa under the assumption that there would be little to no resistance. In fact, Vichy French forces put up a strong and bloody resistance to the Allies in Oran and Morocco, but not in Algiers, where a coup d’état by the French resistance on November 8 neutralized the French XIX Corps before the landing and arrested the Vichy commanders. Consequently, the landings met no practical opposition in Algiers, and the city was captured on the first day along with the entire Vichy African command. After three days of talks and threats, Generals Mark Clark and Dwight Eisenhower compelled the Vichy Admiral François Darlan (and General Alphonse Juin) to order the cessation of armed resistance in Oran and Morocco by French forces on November 10-11 with the provision that Darlan would be head of a Free French administration. During Operation Torch, American, Vichy French, and German navy vessels fought the Naval Battle of Casablanca, ending in an American victory.

The Allied landings prompted the Axis occupation of Vichy France. In addition, the French fleet was captured at Toulon by the Italians, which did them little good as the main portion of the fleet had been scuttled to prevent its use by the Axis. The Vichy army in North Africa joined the Allies.

Following the Operation Torch landings, the Germans and Italians initiated a buildup of troops in Tunisia to fill the vacuum left by Vichy troops who had withdrawn. During this period of weakness, the Allies decided against a rapid advance into Tunisia while they wrestled with the Vichy authorities. Many of the Allied soldiers were tied up in garrison duties because of the uncertain status and intentions of the Vichy forces.

By the beginning of March, the British Eighth Army—advancing westward along the North African coast—reached the Tunisian border. Rommel and von Arnim found themselves in an Allied “two army” pincer. They were outflanked, outmanned, and outgunned. The British Eighth Army bypassed the Axis defence on the Mareth Line in late March and First Army in central Tunisia launched their main offensive in mid-April to squeeze the Axis forces until their resistance in Africa collapsed. The Axis forces surrendered on May 13, 1943, yielding over 275,000 prisoners of war. The last Axis force to surrender in North Africa was the 1st Italian Army. This huge loss of experienced troops greatly reduced the military capacity of the Axis powers, although the largest percentage of Axis troops escaped Tunisia. This defeat in Africa led to all Italian colonies in Africa being captured.