The Truman Doctrine was an American foreign policy created to contain Soviet geopolitical spread during the Cold War, first announced to Congress by President Harry S. Truman on March 12, 1947.

Greek Civil War
A war fought in Greece from 1946 to 1949 between the Greek government army (backed by the United Kingdom and the United States), and the Democratic Army of Greece (DSE, the military branch of the Greek Communist Party (KKE), backed by Yugoslavia and Albania as well as by Bulgaria.
Truman Doctrine
An American foreign policy created to counter Soviet geopolitical spread during the Cold War, announced by Harry S. Truman to Congress in 1947.
containment
A military strategy to stop the expansion of an enemy, best known as the Cold War policy of the United States and its allies to prevent the spread of communism.

The Truman Doctrine was an American foreign policy created to counter Soviet geopolitical spread during the Cold War. It was first announced to Congress by President Harry S. Truman on March 12, 1947, and further developed on July 12, 1948, when he pledged to contain Soviet threats to Greece and Turkey. American military force was usually not involved, but Congress appropriated free gifts of financial aid to support the economies and the military of Greece and Turkey. More generally, the Truman Doctrine implied American support for other nations threatened by Soviet communism. The Truman Doctrine became the foundation of American foreign policy, and led in 1949 to the formation of NATO, a military alliance that is still in effect. Historians often use Truman’s speech to date the start of the Cold War.

Truman told Congress that “it must be the policy of the United States to support free people who are resisting attempted subjugation by armed minorities or by outside pressures.” Truman reasoned that because the totalitarian regimes coerced free peoples, they represented a threat to international peace and the national security of the United States. Truman made the plea amid the crisis of the Greek Civil War (1946–49). He argued that if Greece and Turkey did not receive the aid that they urgently needed, they would inevitably fall to communism with grave consequences throughout the region. Because Turkey and Greece were historic rivals, it was necessary to help both equally even though the threat to Greece was more immediate. Historian Eric Foner argues the Truman Doctrine “set a precedent for American assistance to anticommunist regimes throughout the world, no matter how undemocratic, and for the creation of a set of global military alliances directed against the Soviet Union.”

For years, Britain had supported Greece, but was now near bankruptcy and was forced to radically reduce its involvement. In February 1947, Britain formally requested for the United States to take over its role in supporting the Greeks and their government. The policy won the support of Republicans who controlled Congress and involved sending $400 million in American money but no military forces to the region. The effect was to end the communist threat, and in 1952, both Greece and Turkey joined NATO, a military alliance, to guarantee their protection.

The Truman Doctrine was informally extended to become the basis of American Cold War policy throughout Europe and around the world. It shifted American foreign policy toward the Soviet Union from détente (a relaxation of tension) to a policy of containment of Soviet expansion as advocated by diplomat George Kennan. It was distinguished from rollback by implicitly tolerating the previous Soviet takeovers in Eastern Europe.

The Greek Civil War was fought in Greece from 1946 to 1949 between the Greek government army (backed by the United Kingdom and the United States), and the Democratic Army of Greece (DSE, the military branch of the Greek Communist Party (KKE), backed by Yugoslavia and Albania as well as by Bulgaria. The fighting resulted in the defeat of the Communist insurgents by the government forces.

In the second stage of the civil war in December 1944, the British helped prevent the seizure of Athens by the Greek Communist Party (KKE). In the third phase (1946–49), guerrilla forces controlled by the KKE fought against the internationally recognized Greek government which was formed after 1946 elections boycotted by the KKE. At this point, the British realized that the Greek leftists were being directly funded by Josip Broz Tito in neighboring Yugoslavia; the Greek communists received little help directly from the Soviet Union, while Yugoslavia provided support and sanctuary. By late 1946, Britain informed the United States that due to its own weakening economy, it could no longer continue to provide military and economic support to Greece.

In 1946–47, the United States and the Soviet Union moved from wartime allies to Cold War adversaries. Soviet imperialism in Eastern Europe, its delayed withdrawal from Iran, and the breakdown of Allied cooperation in Germany provided a backdrop of escalating tensions for the Truman Doctrine. To Harry S. Truman, the growing unrest in Greece began to look like a pincer movement against the oil-rich areas of the Middle East and the warm-water ports of the Mediterranean.

In February 1946, George Kennan, an American diplomat in Moscow, sent his famed “Long Telegram,” which predicted the Soviets would only respond to force and that the best way to handle them was through a long-term strategy of containment by stopping their geographical expansion. After the British warned that they could no longer help Greece and Prime Minister Konstantinos Tsaldaris’s visit to Washington in December 1946 to ask for American assistance, the U.S. State Department formulated a plan. Aid would be given to both Greece and Turkey to help cool the long-standing rivalry between them.

American policymakers recognized the instability of the region, fearing that if Greece was lost to communism, Turkey would not last long. If Turkey yielded to Soviet demands, the position of Greece would be endangered. Fear of this regional domino effect threat guided the American decision. Greece and Turkey were strategic allies for geographical reasons as well, as the fall of Greece would put the Soviets on a dangerous flank for the Turks and strengthen the Soviet Union’s ability to cut off allied supply lines in the event of war.

The Truman Doctrine underpinned American Cold War policy in Europe and around the world. In the words of historian James T. Patterson, “The Truman Doctrine was a highly publicized commitment of a sort the administration had not previously undertaken. Its sweeping rhetoric, promising that the United States should aid all ‘free people’ being subjugated, set the stage for innumerable later ventures that led to globalistic commitments. It was in these ways a major step.”

The doctrine endured, historian Dennis Merill argues, because it addressed a broader cultural insecurity about modern life in a globalized world. It dealt with Washington’s concern over communism’s domino effect, it enabled a media-sensitive presentation of the doctrine that won bipartisan support, and it mobilized American economic power to modernize and stabilize unstable regions without direct military intervention. It brought nation-building activities and modernization programs to the forefront of foreign policy.

The Truman Doctrine became a metaphor for emergency aid to keep a nation from communist influence. Truman used disease imagery not only to communicate a sense of impending disaster in the spread of communism but also to create a “rhetorical vision” of containing it by extending a protective shield around non-communist countries throughout the world. It echoed the “quarantine the aggressor” policy Truman’s predecessor, Franklin D. Roosevelt, sought to impose to contain German and Japanese expansion in 1937. The medical metaphor extended beyond the immediate aims of the Truman Doctrine in that the imagery combined with fire and flood imagery evocative of disaster provided the United States with an easy transition to direct military confrontation in later years with communist forces in Korea and Vietnam. By ideological differences in life or death terms, Truman was able to garner support for this communism-containing policy. 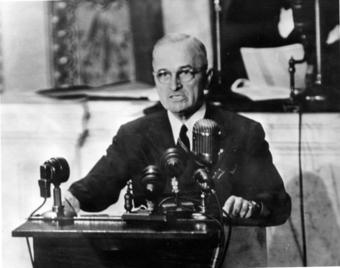 Truman Doctrine On March 12, 1947, President Harry S. Truman appeared before a joint session of Congress and laid out his vision on containment which came to be known as the Truman Doctrine.