Under Stalin, forced collectivization of farms was implemented all over the country, causing widespread famine and millions of deaths, primarily of Ukrainian peasants.

first Five-Year Plan
A list of economic goal, created by General Secretary Joseph Stalin and based on his policy of Socialism in One Country, including the creation of collective farming systems that stretched over thousands of acres of land and had hundreds of peasants working on them.
kulaks
A category of affluent landlords in the later Russian Empire, Soviet Russia, and the early Soviet Union, especially any peasant who resisted collectivization. According to the political theory of Marxism-Leninism of the early 20th century, these peasants were class enemies of the poorer peasants.
Holodomor
A man-made famine in Ukraine in 1932 and 1933 that killed an estimated 2.5–7.5 million Ukrainians.

The Soviet Union enforced the collectivization of its agricultural sector between 1928 and 1940 during the ascendancy of Joseph Stalin. It began during and was part of the first Five-Year Plan. The policy aimed to consolidate individual landholdings and labor into collective farms. The Soviet leadership expected that the replacement of individual peasant farms by collectives would immediately increase the food supply for the urban population, the supply of raw materials for processing industry, and agricultural exports. Planners regarded collectivization as the solution to the crisis of agricultural distribution (mainly in grain deliveries) that began in 1927. This problem became more acute as the Soviet Union pressed ahead with its ambitious industrialization program.

In the early 1930s, more than 91% of agricultural land became “collectivized” as rural households entered collective farms with their land, livestock, and other assets. The sweeping policy came at tremendous human and social costs.

Despite the expectations, collectivization led to a catastrophic drop in farm productivity, which did not return to the levels achieved under the NEP until 1940. In the first years of collectivization, it was estimated that industrial production would rise by 200% and agricultural production by 50%, but these expectations were not realized. Stalin blamed this unanticipated failure on kulaks who resisted collectivization. However, so-called kulaks made up only 4% of the peasant population; Stalin targeted the slightly better-off peasants who took the brunt of violence from the OGPU and the Komsomol, who comprised about 60% of the population. Those officially defined as “kulaks,” “kulak helpers,” and, later, “ex-kulaks” were shot, placed in Gulag labor camps, or deported to remote areas of the country, depending on the charge. Archival data indicates that 20,201 people were executed during 1930, the year of Dekulakization.

The upheaval associated with collectivization was particularly severe in Ukraine and the heavily Ukrainian Volga region. Peasants slaughtered their livestock en masse rather than give them up. In 1930 alone, 25% of the nation’s cattle, sheep, and goats and one-third of all pigs were killed. It was not until the 1980s that the Soviet livestock numbers returned to their 1928 level. Government bureaucrats who had been given a rudimentary education on farming techniques were dispatched to the countryside to “teach” peasants the new ways of socialist agriculture, relying largely on Marxist theoretical ideas that had little basis in reality. The farmers who knew agriculture well and were familiar with the local climates, soil types, and other factors had been sent to the gulags or shot as enemies of the state. Even after the state inevitably succeeded in imposing collectivization, the peasants sabotaged as much as possible by cultivating far smaller portions of their land and working much less. The scale of the Ukrainian famine has led many Ukrainian scholars to argue that there was a deliberate policy of genocide against the Ukrainian people. Other scholars argue that the massive death totals were an inevitable result of a very poorly planned operation against all peasants, who gave little support to Lenin or Stalin. 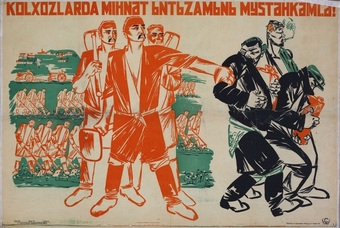 Widespread famine ensued from collectivization and affected Ukraine, southern Russia, and other parts of the USSR. The death toll from famine in the Soviet Union is estimated between 5 and 10 million people. Most modern scholars agree that the famine was caused by the policies of the government of the Soviet Union under Stalin, rather than by natural causes. According to Alan Bullock, “the total Soviet grain crop was no worse than that of 1931 … it was not a crop failure but the excessive demands of the state, ruthlessly enforced, that cost the lives of as many as five million Ukrainian peasants.” Stalin refused to release large grain reserves that could have alleviated the famine, while continuing to export grain; he was convinced that the Ukrainian peasants had hidden grain away and strictly enforced draconian new collective-farm theft laws in response. Other historians hold it was largely the insufficient harvests of 1931 and 1932 caused by a variety of natural disasters that resulted in famine, ended with the successful harvest of 1933. Soviet and other historians have argued that the rapid collectivization of agriculture was necessary to achieve an equally rapid industrialization of the Soviet Union and ultimately win World War II. Alec Nove claims that the Soviet Union industrialized in spite of rather than because of its collectivized agriculture.

The Soviet famine of 1932–33 affected the major grain-producing areas of the Soviet Union, leading to millions of deaths in those areas and severe food shortage throughout the USSR. These areas included Ukraine, Northern Caucasus, Volga Region and Kazakhstan, the South Urals, and West Siberia. Gareth Jones was the first western journalist to report the inhumane devastation. The subset of the famine within the Ukrainian Soviet Socialist Republic, the Kuban, is called Holodomor. All affected areas were heavily populated by Ukrainians.

The Holodomor (Ukrainian for “extermination by hunger”), also known as the Terror-Famine and Famine-Genocide in Ukraine, was a man-made famine in Ukraine in 1932 and 1933 that killed an estimated 2.5–7.5 million Ukrainians, with millions more in demographic estimates. It was part of the wider disaster, the Soviet famine of 1932–33, which affected the major grain-producing areas of the country.

During the Holodomor millions of inhabitants of Ukraine, primarily ethnic Ukrainians, died of starvation in a peacetime catastrophe unprecedented in the history of the country. Since 2006, the Holodomor has been recognized by the independent Ukraine and 24 other countries as a genocide of the Ukrainian people carried out by the Soviet Union.

Some scholars believe that the famine was planned by Joseph Stalin to eliminate the Ukrainian independence movement. Using Holodomor in reference to the famine emphasizes its man-made aspects, arguing that actions such as rejection of outside aid, confiscation of all household foodstuffs, and restriction of population movement confer intent, defining the famine as genocide; the loss of life has been compared to the Holocaust. If Soviet policies and actions were conclusively documented as intending to eradicate the rise of Ukrainian nationalism, they would fall under the legal definition of genocide. 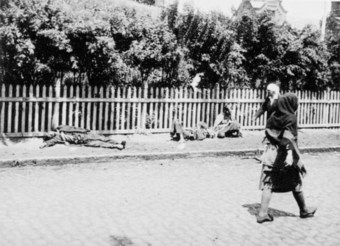 Golodomor: Starved peasants on a street in Kharkiv, Ukraine, 1933